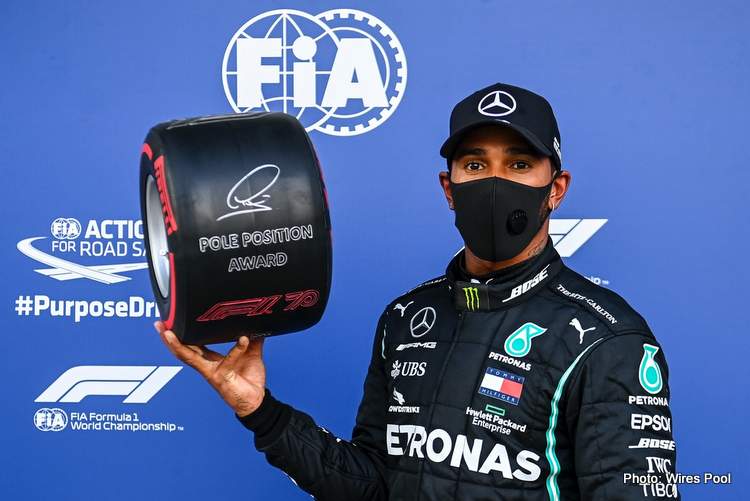 Lewis Hamilton will start a Grand Prix from pole position for the 96th time, the eighth time this season after he powered to the top of the timing sheets in qualifying for the 2020 Russian Grand Prix.

After playing second fiddle to his teammate Valtteri Bottas on Friday, Lewis emerged from his ‘slumber’ in Saturday in FP3 and then in qualifying hit it home with another stellar effort that left everyone behind in the dust of Sochi.

The World Champion’s pole-winning lap time of 1:31.04 was half a second faster than next best, Red Bull’s Max Verstappen and over six-tenths of a second up on Valtteri Bottas in the other Mercedes. But it was by no means plain sailing according to the World Champion.

“That was one of the toughest qualifying sessions I can remember,” declared Lewis in the team’s Satruday report, “Proper heart in your mouth the whole way. But I feel super grateful for everyone keeping their cool as it could have been a lot, lot worse.

“Q2 was hugely challenging, my first attempt was taken away for going over the track limits at the final corner. The team brought me in for refuelling and to fit new tyres but when I was on my second lap, the red flag came out. After that, it was very close to still get that final lap in – I overtook a few cars in the last sector but then lost time behind a Renault.

“I just heard Bono say ‘go, go, go’, so I was gunning it to get across the line. There was so much going on and I had to just calm down and find my centre. Valtteri had been strong all weekend, so I had no choice but to deliver with those final Q3 laps.

“The first lap in the final session was really great, and I thought it would be difficult to improve, but I managed to find a tiny bit on the second lap. It’s nice to take pole position, but this track is probably the worst place to be on pole, due to the long run to the first braking zone.

“So, I’m expecting a tough fight down to Turn 2 and a challenging race, especially as I’m starting on the Soft tyre, which is a good compound for the race start but is the worst tyre for the opening stint.

“We’ll sit down tonight and figure out the best approach to the race,” added Lewis who will be hunting his 91st Grand Prix victory on Sunday, to tie him with record-holder Michael Schumacher.

Toto Wolff was impressed by his $40-million-a-year-man, “It’s always impressive how Lewis manages to put it all together, even if adversity is being thrown at him. He did a fantastic job to secure pole position.

“But we’re looking forward to an exciting race, with both drivers starting on different tyre compounds and a long run to Turn 2. Let’s see how it all plays out,” concluded the Mercedes team boss, whose team have won all six previous Grand Prix races at the Olympic venue.

Lewis was summoned to the FIA Race Stewards in the wake of qualy. After which, the officials reported: “The Stewards heard from the driver of Car 44 and team representative and have reviewed video evidence. The driver left the track at turn 2 and did not manage to re-join the track as defined in the Event Notes (v3) 22.1.

“The driver accepted that he had not followed the instructions and further he accepted that in a race there would be a penalty. The Stewards determined that there was no advantage, as the relevant lap time was
deleted according to Doc 27.”