Albon: I celebrated with a candlelit dinner for one 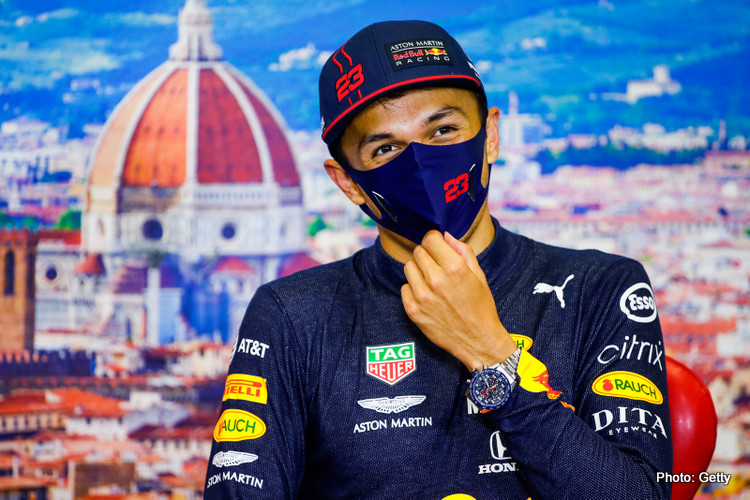 Red Bull’s Alexander Albon’s celebrations after his first Formula 1 podium at the Tuscan Grand Prix were not quite what he envisioned, the Thai has admitted.

Denied twice before by incidents with Lewis Hamilton, Albon finally reached the milestone with a storming drive at Mugello, but scheduling commitments meant he couldn’t afford to let loose.

“I had a candlelit dinner for one,” he told the F1 Nation podcast. “I literally treated myself to a T-bone steak and a tiramisu, and then I went to bed. It was quite tragic.

“We had to do a filming day at a go kart track on the Monday, so I had to stay over in Italy. I was at the hotel which I was staying in all weekend at Mugello… and I was completely alone… Actually, there was a couple next to me, who didn’t even know me.”

Nevertheless, Albon is just relieved to have broken his duck, particularly given the continuously swirling rumours over his future with the team.

“It feels good – honestly, I’m happy,” he said. “We had a couple of chances to get this podium, and definitely I would have liked it to have happened sooner than it did, but it’s nice. It was a nice time to happen as well if I’m honest, because there’s been a lot of talk and everything.

“It was feeling like Spa and Monza was getting better, and it felt like I was making progress, so to be able to have a weekend where it felt like we got the result we deserved – it’s just nice. And obviously from my side of the garage, these guys had been off that podium for a while, so it was nice to give them something.”

Sitting fifth in the driver’s championship on 63 points, Albon has largely struggled to keep-up with teammate Max Verstappen since replacing Pierre Gasly in the team at the 2019 Belgian Grand Prix. Particularly after Gasly’s win at the Italian Grand Prix, many have called for them to be swapped again, but Red Bull have been staunch in defending the Thai, while suggesting difficulties on their end with setting-up and developing the car have contributed to his performances.

Asked whether Mugello meant the “monkey” was now “off his back”, Albon suggested that he never viewed his situation in those terms in the first place.

“Obviously I would say this podium was something I really wanted, there’s no secret about that. But it didn’t ever feel like I had to do it.

“To me, it’s always been the process that’s been important, in terms of making sure everything that’s in my control is going well and I’m doing what I want to do. The result is the result. Sometimes it goes your way, sometimes it doesn’t.

“Obviously a track like Monza definitely didn’t, but I knew that the process was going the right way and I felt like I was getting on top of it. To me, it was more of a ‘it’s going to come, don’t chase it, it’s going to come eventually’.”