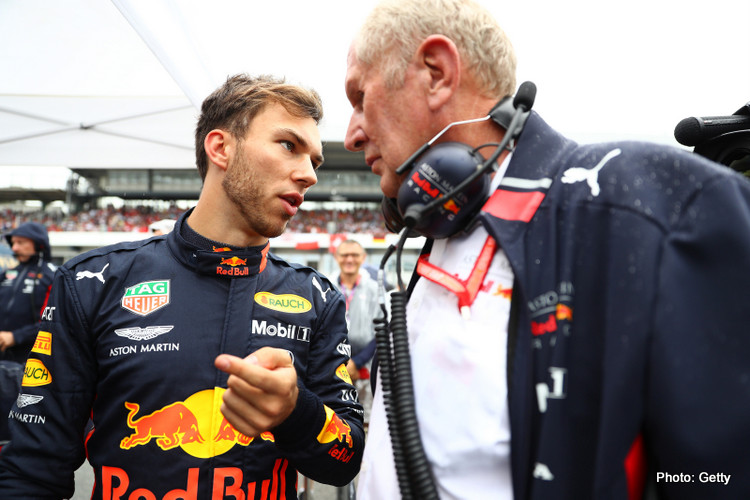 Hamilton, who said after Gasly’s win in Sunday’s Italian Grand Prix that the Frenchman hadn’t been “treated fairly” by the energy drinks outfit last season, is alleged by Marko to have been playing a very different tune last season.

“Lewis spoke to our team boss Christian Horner on the plane and recommended that Albon be put in the car instead of Pierre Gasly,” he told Sport1. “That was before the swap was carried out by us after the summer break.”

Through the first 12 races of the 2019 season, Gasly had significantly under performed compared to teammate Max Verstappen, and while Marko’s comments cannot be verified, Hamilton had made a joke at Gasly’s expense at the Hungarian Grand Prix, where in a question about the potential return of Fernando Alonso to F1, he had suggested that Red Bull had a seat waiting for him.

A week later, Gasly was swapped with Albon, and Marko has not forgotten Hamilton’s remarks, indicating that the Briton would be better served keeping his mouth shut.

“We don’t care. The one he wanted to get rid of last summer has now won the Italian Grand Prix with our AlphaTauri team. So much for his expertise.

“I have no idea why Hamilton always feels the need to interfere. But it doesn’t matter to us what opinion people from the outside have.”

Hamilton’s comments aside, Marko went on to rule out swapping Albon – who is now struggling himself alongside Verstappen – with Gasly once again.

“These are not our plans. We want to make Alpha Tauri even stronger in the future and that includes keeping Gasly as a strong team leader. ”

“Everyone falls away against Max. But the criticism of Albon is not entirely fair. He’s been very unlucky this year and we made strategic mistakes that affected his performance. ”

“But we still believe that he can deliver the performance we ask of him if things go optimally. And that has not been the case very often this season.”