Marko: Gasly is not under consideration 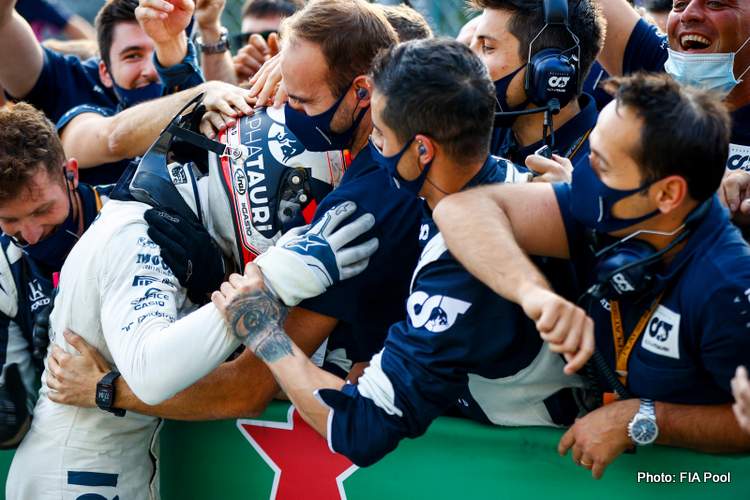 The best Red Bull could do at the 2020 Italian Grand Prix was a miserable 15th place by Alex Albon, with Max Verstappen watching the race from the pits after an engine issue while Pierre Gasly powered to a famous victory on Sunday at Monza.

With it, the AlphaTauri driver has ambushed Red Bull management with a decision to make: demote under-performing Albon or promote sizzling Gasly for a second crack at being Max’s teammate. If there was ever a time to do the swap, it is now.

Untypically, normally very impatient, Red Bull seem set on making the apparently fruitless Albon experiment work and keep Pierre as head of their junior team, despite his sensational victory on Sunday at Monza.

Indeed, team consultant Helmut Marko poured cold water on suggestions of a driver swap any time soon when he told Sky Germany, “That is currently not a consideration. Gasly is one of our Red Bull drivers, he is currently with Alpha Tauri and is doing a great job there. But we also need a team leader there.

Gasly comes from the Red Bull pipeline of talent; in late 2017 he replaced Daniil Kvyat at Toro Rosso (now AlphaTauri) and was promoted to Red Bull for the 2019 season. But after disappointing results, 12 rounds into the season, he was dropped to the junior team, replaced by Albon, a rookie at the time.

However, the Frenchman could not have made a better case for himself to be promoted back to the Bulls at the Temple of Speed on Sunday, and said as much “I think I’m ready but it’s not up to me to decide.”

In 2021, Verstappen will, of course, spearhead Red Bull in 2021 but for now, who his teammate will be is uncertain. Assuming Kvyat is out of the picture, as he has not matched his teammate all season, that leaves Gasly and Albon. If the latter continues to struggle, relative to Max, it will be difficult to justify keeping him on for another year.

At the same time, Gasly is flourishing because he is the number one guy in the AlphaTauri garage. How will he deal with playing second fiddle?

Because, when all is said and done, all Red Bull really want is an able number two who can push Max, because there are few, if any, who can beat him.

If Pierre’s future does not end with Red Bull, being from France it would be no surprise if Renault start sniffing around because Esteban Ocon has hardly set the world alight. In fact, his humbling by Daniel Ricciardo (himself humbled by Max) suggests that he may be very good, but that’s not enough to be among the 20 best-of-the-best who ply their trade in the top flight.

Whatever the case, Pierre’s shares are soaring right now, deservedly so for the sport’s proper Comeback Kid and the first Frenchman to win a Grand Prix since Olivier Panis did so in Monaco, back in 1996 the year the 2020 Italian Grand Prix winner was born.

P1!! My first victory in F1!!🏆
I’m lost for words, still struggling to realise, its just amazing!!
Everything was perfect, just missed the tifosis down under the podium. @alphatauri we have done it!! Thanks everyone for all the messages & support!! Today is a day I’ll remember. pic.twitter.com/3eILYSMsIu