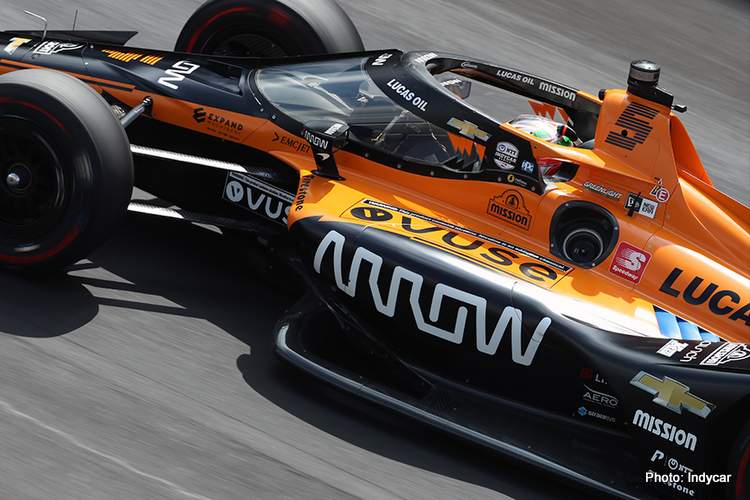 Rookie Pato O’Ward turned the fastest lap of Miller Lite Carb Day practice for the 104th Indianapolis 500 presented by Gainbridge on Friday, Aug. 21, with winners of “The Greatest Spectacle in Racing” looming large in the next three spots on the speed charts.

O’Ward, from Monterrey, Mexico, produced a top lap of 225.355 mph in the No. 5 Arrow McLaren SP Chevrolet during the two-hour final practice before Race Day this Sunday. O’Ward will start 15th when “The Greatest Spectacle in Racing” takes the green flag at 2:30 p.m. (ET), with live coverage starting at 1 p.m. on NBC and the Pennzoil INDYCAR Radio Network.

“I think it’s just been really important to try and get the best car under us for Race Day,” O’Ward said. “I think traffic running is going to be key. It’s going to be my first ‘500.’ From just feeling out practice and everything, it’s so important to have a car that’s able to follow closely and be able to get runs on people, ultimately move forward instead of moving backward.”

2008 Indy 500 winner and five-time NTT INDYCAR SERIES champion Scott Dixon was second fastest on the 2.5-mile oval as teams worked on their race setups, with a best lap of 224.646 in the No. 9 PNC Bank Chip Ganassi Racing Honda. Dixon will start second Sunday.

“We had to go through our front wings today just to make sure they’re all close in case we need one in the race,” Dixon said. “We lost some front grip, and we’re trying to see if the teammates had the same situation. Apart from that, the No. 9 PNC Bank Honda felt really good and really fast. It pulls up wicked fast. Hopefully that’s true when it comes to the race.”

Takuma Sato, winner of the 2017 Indy 500, ended up fourth at 224.580 in the No. 30 Panasonic/PeopleReady Honda. He will start third Sunday, on the front row with Dixon and pole sitter Marco Andretti.

Arrow McLaren SP placed two cars and rookie drivers in the top five, as Oliver Askew was fifth at 224.128 in the team’s No. 7 Chevrolet entry. Askew starts 21st in the 33-car field Sunday.

Pole sitter Andretti has been a fixture near the top of the speed charts in every session since practice opened Wednesday, Aug. 12, but he ended up 28th overall Friday at 221.314 in the No. 98 U.S. Concrete/Curb Honda.

Two-time Formula One World Champion Fernando Alonso was 23rd Friday at 222.680 in the No. 66 Ruoff Arrow McLaren SP Chevrolet. Alonso will start 26th Sunday as he attempts to become just the second driver to win the “Triple Crown” of motorsports with victories in the Indianapolis 500, Monaco Grand Prix and 24 Hours of Le Mans.

Helio Castroneves ended up 17th at 223.093 in the No. 3 Pennzoil Team Penske Chevrolet as he will try Sunday to become just the fourth four-time winner of “The Greatest Spectacle in Racing.” Castroneves will start 28th. If he triumphs, it will tie the all-time race record for the deepest starting spot of the race winner, a mark set by Ray Harroun in the inaugural race in 1911 and matched by Louis Meyer in 1936.