Speeds and Andretti Autosport’s expectations for the pole position for the 104th Indianapolis 500 presented by Gainbridge climbed arguably in equal measure, as Marco Andretti posted the fastest lap on “Fast Friday” since Arie Luyendyk record breaking, 239.260 mph, on May 10, 1996.

On Friday, Andretti led the final practice before Crown Royal Armed Forces Qualifying this weekend at the Indianapolis Motor Speedway with a top lap of 38.5454 seconds, 233.491 mph in the No. 98 U.S. Concrete/Curb Honda.

He was one of 23 drivers who posted top speeds of 230 mph or higher, as added turbocharger boost today through Sunday added approximately 50 to 75 more horsepower to the Honda and Chevrolet engines.

“Fast Friday was good, especially with the top speed of the day,” Andretti said. “We seem to be looking good on no-tow speeds, as well. Although I wanted to end the day with runs better than we did, and we have a few things to work out. But we just need to nail tomorrow and the No. 98 car has enough speed for the Fast Nine.”

Two-time Formula 1 World Champion Fernando Alonso returned to the track today after hitting the SAFER Barrier in Turn 4 on Thursday in his No. 66 Ruoff Arrow McLaren SP Chevrolet. He was 25th fastest at 229.788.

The first day of qualifying takes place from 11 a.m.-4:50 p.m. (ET) Saturday. The nine fastest cars will earn a berth in the Fast Nine Shootout from 1:15-2:15 p.m. Sunday, which will determine the pole winner and the starting grid for the first three rows of the race Sunday, Aug. 23.

2006 Indy 500 Rookie of the Year Andretti has been one of the three fastest drivers each of the three days of practice as he aims for his first Indy 500 pole and victory. But he will be the 28th of 33 cars to make their first qualifying attempt Saturday, when an earlier spot in the qualifying line should be more advantageous due to cooler air and track temperatures.

The Rahal Letterman Lanigan Racing trio of Graham Rahal, Takuma Sato and Pigot benefited most from the qualifying draw Friday evening. Rahal will be first in the qualifying line, followed by teammate Sato in second. Pigot will make the seventh qualifying attempt in his RLL with Citrone/Buhl Autosport entry. 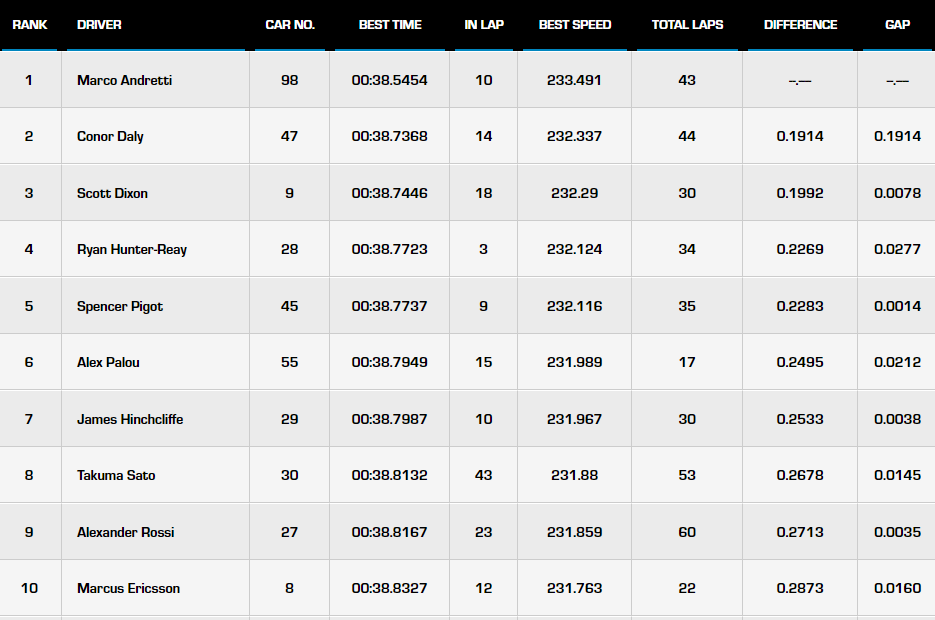