Inside Line: Ferrari and Vettel should split-up before Friday 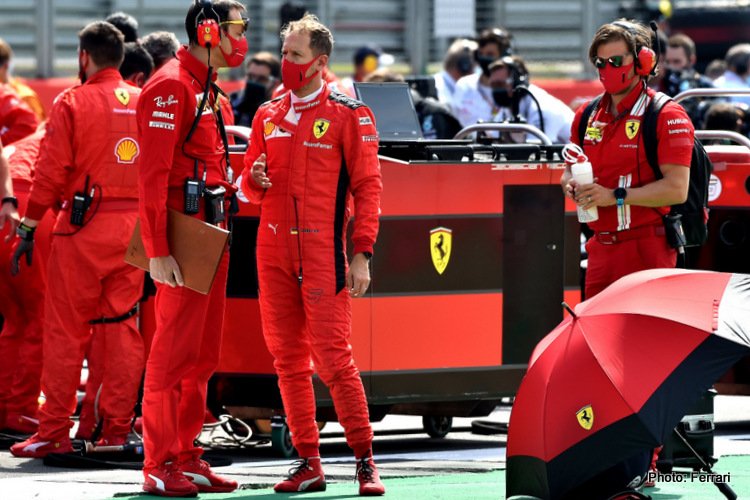 Sebastian Vettel and Ferrari need to go their separate ways as soon as possible as this divorce appears to be heading into ‘War of the Roses’ territory, as the tensions between driver and team were laid bare during the 70th Anniversary Grand Prix weekend.

As a pretext to this piece, it must be pointed out that first and foremost Vettel spun out exiting Turn 1 on lap one of the race at Silverstone on his own accord. Initially, he thought he was hit from behind, but aerials showed (and he admitted later) he simply lost the rear. Another unforced error to add to the ever-growing list.

As a result of his waywardness, the #5 car dropped down to 20th and spent the rest of the afternoon playing catch-up. Incredibly, at on point during the race Vettel had a swipe at his team over the radio: “I’ll hang in there, but you know that you’ve messed up.”

Quizzed about it afterwards Vettel unleashed a vitriol of inuendos which, let’s face it, all but suggested untoward goings-on with regards to his car.

Rewind a week back, remember the fuss about his footwell that got airtime on live TV? The four-time world champion ‘fixing’ his ‘broken’ Ferrari was already sending the messages, subliminal or not.

What he should have done on Sunday, after this blunder, is radioed back, apologised for spinning all on his own, and then offer to help Charles Leclerc in whatever way possible. eg. trip up the Mercs and the Red Bull at the front because, no matter how hard he peddled, Vettel was not going to score points while his teammate might have had a podium had there been smart collaboration.

Nevertheless, Leclerc drove it like he stole it to finish fourth and said it felt like a win; Vettel was 12th and moaned that there was something wrong with the car and his strategy was messed up by the team; a smokescreen in an effort to blur the simple fact that he made a yet another rookie mistake with that early spin.

Blaming his team was a low blow that will not be digested well in Italy, no matter how many grazie ragazzi he screeches before he departs the stable.

Despite Romain Grosjean’s presence on the grid, it is fair to say Seb makes more mistakes than any of his rivals and his record in close wheel-to-wheel encounters is pitiful. He has long ago lost the title-winning mojo he had several years ago. He knows it. His team (telemetry) knows it.

Furthermore, there is no more disruptive influence in any organisation than a disgruntled departing worker marking time until their departure date, the damage they can inflict on morale can be immense and best practice is to offer a deal to take the remaining days off, on the house but not in our house kind of thing.

Ferrari were cruel in the manner in which they dispensed of their once star driver, showing scant respect they announced Carlos Sainz so quickly thereafter which suggested the ousting was longer in the making than we, or Vettel for that matter, knew.

They should now do the right thing and write Seb a fat check for the balance of the badly spent $40-million that goes to his annual retainer, tell him to pack his stuff and escort him out of Maranello with immediate effect. Pronto!

With Nico Hulkenberg back in the circus ring, he could slip in at Alfa Romeo and give Antonio Giovinazzi a chance to shape up (or not) next to Leclerc. Should that fail, they can tap into Kimi Raikkonen to bring in some stability as the Reds await the arrival of Carlos Sainz for next season.

Let’s face it, this season is a write-off with no championship to fight for and podiums scarce for the Reds; they might as well use the opportunity to spring clean and ditch the deadwood sooner rather than later.

And that’s not only Seb, but also the crew that thought it was a good idea to tinker with the PU package.

In fact, Vettel would do well to have a sabbatical ahead of next season in which he is expected to line up for Aston Martin, provided Lawrence Stroll is still brave enough to gamble on the 33-year-old.

On current form, it is a huge gamble as there are a number of drivers more deserving of the seat in terms of performance, race craft and experience – Sergio Perez and The Hulk, again, spring to mind.

As sensible as it is that the Ferrari-Vettel divorce is fast-tracked, it probably won’t be which augers well for column-inches that the matter will no doubt spawn.

Maranello can be a toxic place at times like these. And in Vettel, they may have the best politician in the game trash talking them, subtly and not so subtly but, without doubt, incessantly.

What was once a marriage made in heaven would be best dissolved instantly, before someone gets hurt. How about walking their separate ways before Friday morning in Barcelona?