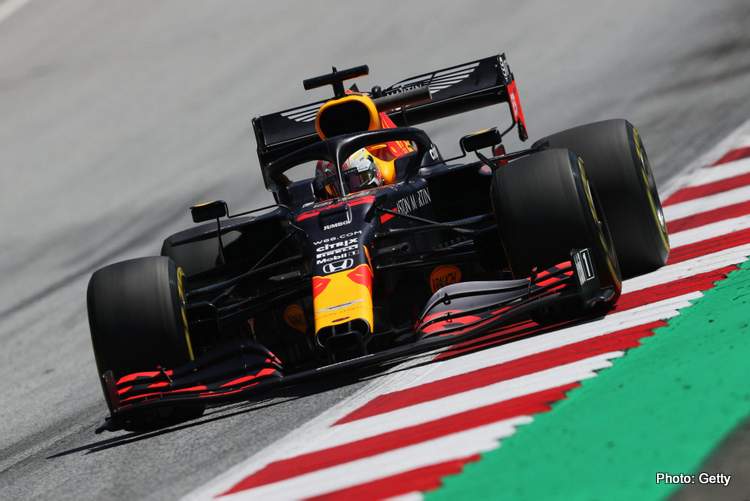 Red Bull’s Max Verstappen topped the timing screens at the end of the second free practice of the first-ever Styrian Grand Prix weekend at Red Bull Ring on Friday, Round 2 of the vastly rearranged 2020 Formula 1 World Championship

The result suggesting that the home team have some handy pace in their package, as they seek to make amends for last Sunday’s disappointment. Teammate Alex Albon survived a spin so finish seventh in the sister car, seven-tenths down on the Dutchman.

The session was marred early on by Daniel Ricciardo’s big shunt in the Renault, the Australian limping away and driven to the medical centre. The Aussie got it wrong into Turn 9, the RS20 snapped out of control before sliding into the wall. It was a big impact, leaving his crew with hard graft to do tonight. He did not set a time.

At the sharp end, Verstappen’s best lap time of 1:03.660 was a mere 0.043 of a second faster than last Sunday’s winner Valtteri Bottas in the Mercedes; the ‘Black Arrows’ appearing out of their comfort zone with the W11 at this stage of proceedings.

Lewis Hamilton was only good for sixth –  six tenths down on the pacesetters – the World Champion did not find the sweet-spot on Friday at Spielberg.

Nevertheless, Mercedes have the power… in third and fourth were the Racing Point duo of Sergio Perez and Lance Stroll, the Pinks showing impressive form as they did in the morning FP1 session (with Perez fastest) and, in fact, going well since FP1 a week ago.

McLaren were also in good shape in the afternoon with Carlos Sainz fifth and Lando Noris in eighth, both appearing comfortably in Q3 range.

Ferrari with their much-vaunted ‘rushed’ updates were nowhere. Whatever they had bolted on to the SF1000 did their drivers no favours, with Charles Leclerc only good for ninth and a full second slower than the top time.

It was worse for teammate Sebastian Vettel who simply could not get to grips with the tail-happy car at his disposal, to say the Ferrari driver was out of sorts is an understatement. The Reds are still in deep trouble.

Esteban Ocon rounded out the top ten in the Renault, but nearly half a second slower than their customer team well above them on the time-sheets. A second covered the top ten on the day.

Just out of the top ten were the AlphaTauri pair, with Pierre Gasly 11th and Daniil Kvyat 12th. The Alfa Romeo boys were next, Kimi Raikkonen a tad faster than Antonio Giovinazzi in the sister car.

It was great news for Williams, their cars no longer anchored to the bottom of timing screens, with George Russell ending the 90-minute session in 15th and rookie teammate Nicolas Latifi 17th.

In contrast, the Haas problems persist, evidence being their drivers slowest of all bar Ricciardo who did not set a notable time before his mishap. Kevin Magnussen was 18th, with Romain Grosjean 19h and 2.4 seconds down on the top time. 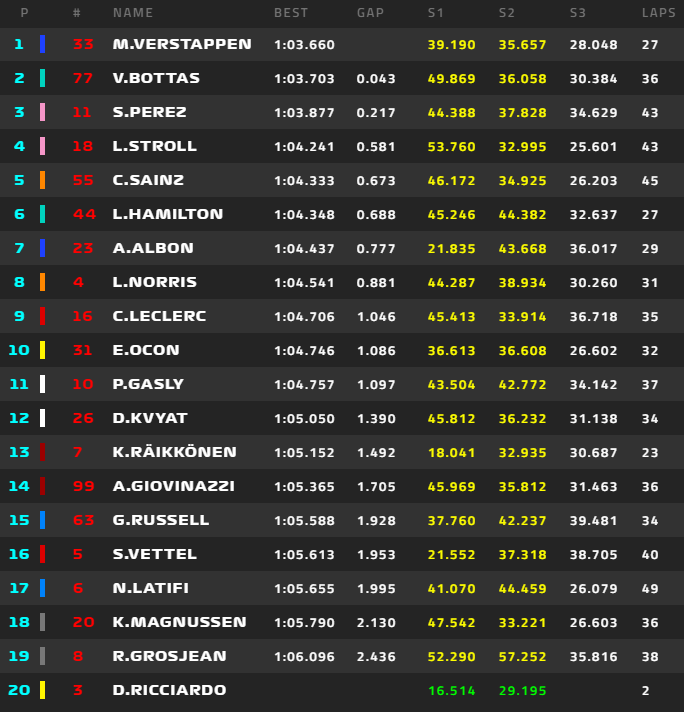