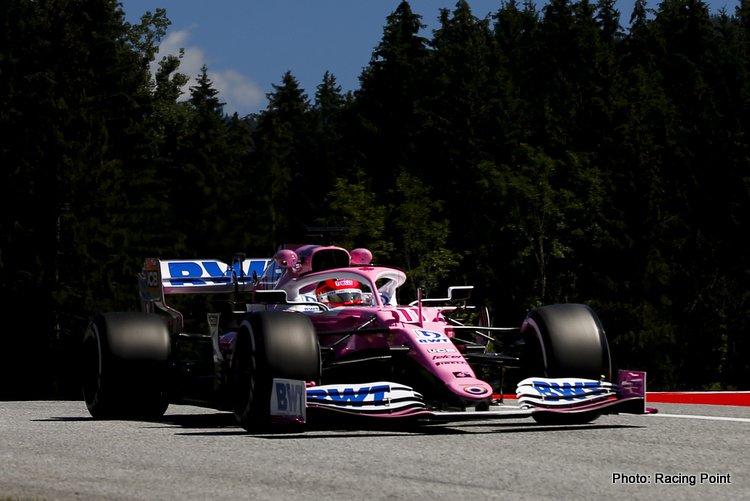 Backing up their pace from last week at the Red Bull Ring, Racing Point’s Sergio Perez was fastest in a highly competitive FP1 for the Styrian Grand Prix on Friday.

Setting the pace with a time of 1:04.867, Perez was just 0.096 seconds clear of Red Bull’s Max Verstappen, with the Mercedes’ of Valtteri Bottas and Lewis Hamilton 0.222s and 0.253s behind him respectively.

Having endured a somewhat disappointing first race in Austria, Perez’s performance in first practice was again proof the Racing Point RP20, dubbed the ‘Pink Mercedes’ is a legitimate threat for the podium positions.

As to the trio of drivers behind the Mexican, Verstappen will be particularly pleased given his Red Bull has not just closed the gap, but leapfrogged the two Mercedes, although obviously there is much more to come from the Black Arrows.

A further 0.276s behind the top four, Lance Stroll was never quite as settled as his teammate Perez, but will be encouraged to be ahead of Alexander Albon by 0.087s, with the Thai having a point to prove after the way his race ended last Sunday.

McLaren’s Carlos Sainz was best of the rest with a 1:05.602, and also racked-up the most mileage in the session in his McLaren.

Pierre Gasly, Daniel Ricciardo and Sebastian Vettel rounded-out the top 10, with a mere 0.072s separating the three of them – a result which for Vettel and Ferrari in particular is not very encouraging considering the new front wing he tested in the session.

Gasly’s AlphaTauri teammate Daniil Kvyat was 11th, ahead of Charles Leclerc, who was himself testing a new floor for the Scuderia.

In an indication of the depth of the current field, Esteban Ocon and Lando Norris were barely outside a second behind Perez’s chart-topping time, despite landing in 13th and 14th respectively.

Alfa Romeo’s Kimi Raikkonen was further 0.533s back, with Haas’ Romain Grosjean only 0.005s behind the Finn in 16th.

Jack Aitken, making his race weekend debut for Williams, had a best time of 1:06.768, beating the session’s other guest driver, Robert Kubica, by 0.029s.

Both Nicholas Latifi and Kevin Magnussen saw their sessions significantly curtailed, the former by a suspected engine failure which brought-out the session’s only red flag, while Magussen only managed a smattering of laps due to a battery issue with his Haas. 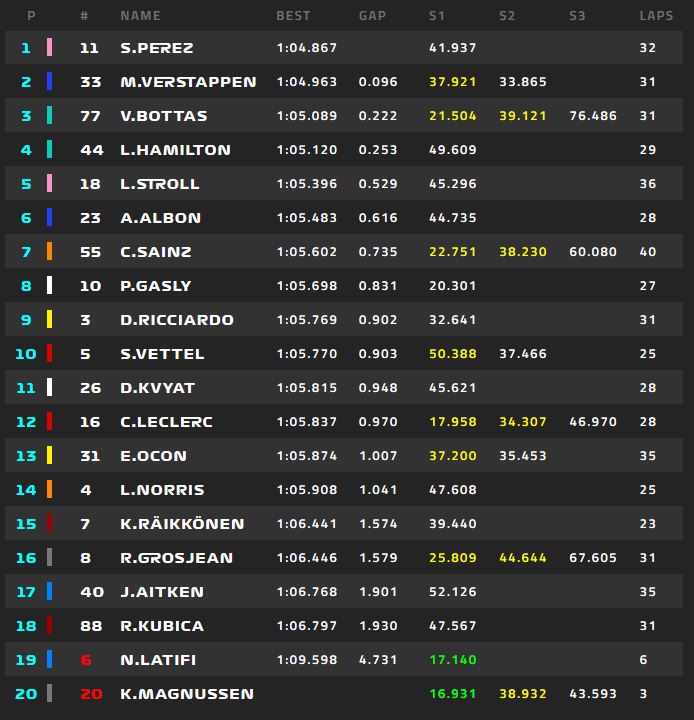