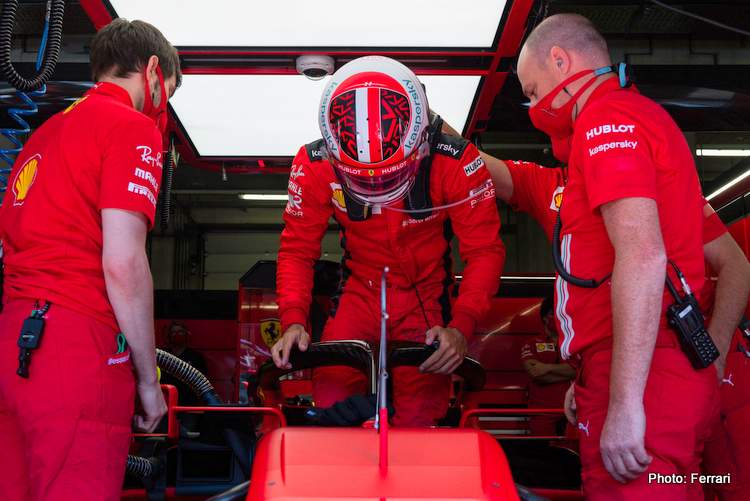 The Italian media has hailed “Little Prince” Charles Leclerc’s second-place performance at the 2020 F1 season-opening Austrian Grand Prix, while criticising the other Ferrari driver Sebastian Vettel who did himself no favours when again he fell victim to his own mistake.

La Gazzetta dello Sport focused on the positives of Leclerc’s race and wrote, “The talent of Leclerc overcame Ferrari’s shortcomings which bodes well for the young driver’s career. He defended intelligently and attacked when the right time came to do so.”

“Who would have thought that Charles Leclerc, in his second year with the team, would be ahead of big favourite Lewis Hamilton in the drivers’ standings. After Ferrari’s mediocre performance in qualifying – almost a second slower at the same venue as they were last year – no one would have dared to predict this, but it happened.”

The gushing continued, “Super Leclerc takes advantage of the opportunities. The defects of his Ferrari make this second place like a victory.

“The wonders of the Little Prince: Leclerc reversed the race. Charles showed the difference between a good driver and a champion. Those two overtaking moves on [Lando] Norris and [Sergieo] Perez will remain etched in memory and say one thing: he is the man Ferrari has been waiting for.

“All he could do, Charles did. He advanced at the right time, taking second place from behind was a superlative performance.”

La Repubblica also trumpeted: “Great return of the Monegasque with two overtaking moves on the last laps. Charles Leclerc, the child blessed with miracles. With much more class than luck, his Ferrari takes the podium in Austria. He finished second after starting in seventh place, from the fourth row, with an uncompetitive car.

Vettel, on the other hand, did himself no favours with an ill-timed move during a scarp for position with McLaren’s Carlos Sainz. By the time the rubber smoke had wafted away Vettel’s Ferrari was pointing the wrong way, his race compromised from then on and lucky the high-attrition on the afternoon gifted him a single point for tenth place.

The La Repubblica added: “Sebastian, who started in 11th position, finished in tenth after having run the risk of colliding with Carlos Sainz, the Spaniard who will replace him at the wheel of the Cavallino next year.

“Leave it all up to Charles, that he will be able to achieve miracles in the face of many difficulties. The guy who Maranello have given the team steering wheel to knows that he has an important role and responsibility. ”

La Stampa reported: “Leclerc managed to squeeze the Ferrari to its limits, take advantage of all opportunities and launch two decisive attacks on the final lap. Considering the difficulties, the poor performance of Ferrari, the Monegasque driver managed to resist.”

They then had a go at Vettel, “The list of unforced errors is long: Vettel makes the most painful of mistakes against the driver who will take his place at the end of the year, that is, Sainz.

“Vettel, author of a sad race after a bad qualifying, he first had trouble overcoming Lance Stroll with power problems with Racing Point and then collided with Sainz.

“The fact that he finished tenth, which made him the second-last driver ahead of only of Nicolas Latifi in the Williams, says a lot. An excellent Giovinazzi also finished better than Vettel.”

Il Giornale headlined with: “Ferrari thanks the Little Prince.” And added in the editorial, “Leclerc’s masterpiece, helped by penalties to Hamilton. Before and during the race it was a Vettel mess, only tenth.

“Give Leclerc a winning car and he’ll take care of the rest, Ferrari celebrates second place unexpectedly and undeservedly the car’s performance isn’t worthy of second place, and also not tenth place of either Seb.

“Ferrari is behind Mercedes and Red Bull and is struggling to stay ahead of McLaren and Racing Point. Second place in such conditions is a gift that should not be wasted.”