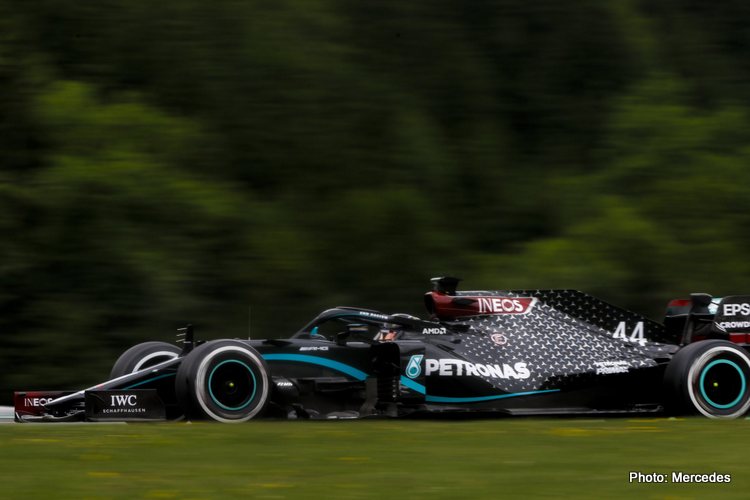 Mercedes have managed to pick up right where they left-off in preseason testing with a Lewis Hamilton-Valtteri Bottas 1-2 in the first practice session for the Austrian Grand Prix on Friday.

The class of the running in Barcelona, the Silver Arrows’ performance came as no surprise, particularly as it was confirmed that their secret weapon, Dual Axis Steering (DAS), was indeed on the car.

At the same time, Red Bull team principal Christian Horner hinted on the Sky Sports F1 that a protest could be incoming, and indeed they might have little choice but to protest if this session is any indication.

Outside the top three things were more interesting, with McLaren’s Carlos Sainz a mere 0.013s behind Verstappen in fourth, and Sergio Perez in Racing Point’s ‘Pink Mercedes’ a further 0.081s back.

Renault’s Daniel Ricciardo best lap of 1:05.860 was good enough for eighth, with the Haas of Kevin Magnussen a pleasant surprise in ninth.

Rounding out the top ten was the Ferrari of Charles Leclerc, 1.108s off Hamilton’s time, although any overreactions about Ferrari’s performance should be tempered by the fact they opted not to run soft tyres.

Lance Stroll was P11 for Racing Point, Sebastian Vettel alongside him in 12th.

Esteban Ocon was 13th for Renault, 0.217s behind teammate Ricciardo.

The Alfa Romeo pair of Antonio Giovinazzi and Kimi Raikkonen were 14th and 15th respectively, the second-slowest team with five different outfits behind them.

Pierre Gasly was one of the few drivers to make a notable mistake in the session, spinning at the final corner and finishing with a best of 1:06.404.

George Russell and Nicholas Latifi were 17th and 18th for Williams, largely confirming the notion the team’s progress was not enough to lift them off the bottom of the field.

Daniil Kvyat was 19th, only managing 19 laps, while Romain Grosjean brought up the rear after a brake fluid issue sidelined him for most of the session.