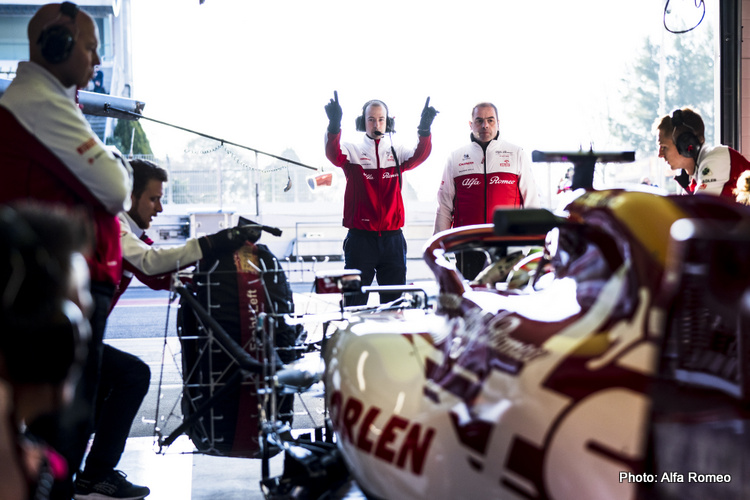 The season, which has been delayed until at least June due to the coronavirus pandemic, is set to see multiple races run back-to-back, and some potentially even three-in-a-row in order to fit-in as many grands prix as possible.

And while others have suggested F1 teams will need as many races as possible to earn enough sponsor and prize-money, Vasseur suggested such a schedule could do more harm than good.

“Between the inevitable reduction in our FOM revenues and the difficulties that our sponsors will have to face in the coming months, we will end up with 15/20% less revenue, while costs will skyrocket,” he explained to Auto Hebdo.

“Multiplying the “triplets” (three Grands Prix in three weeks) is going to require us to hire new staff to respond to the accelerated pace of the races and we’re going to have to launch into production a whole host of parts — front wing, flat bottoms, etc. — which will be very difficult to produce, and which we may not use, but will need just in case.”

Nevertheless, Vasseur is happy the teams have managed to reach some agreements around car production and development, most notably with the retaining of the budget cap for next year, despite the shift of the new regulations to the 2022 season.

“The idea is that we should at least freeze the monocoque, the engine and other elements still to be defined such as the hub-carriers and others. There was no need to decide everything [in last Thursday’s conference call]. Just as important was to keep the budget cap coming into force on 1st January 2021.

“This will allow us to have a somewhat smoother landing when the epidemic subsides and prevent the biggest teams from spending inconsiderate amounts of money on their 2022 cars.”

Asked whether he thought this was the worst crisis in F1 history, Vasseur indicated it certainly might be.

“In more than thirty years of my career, I have had to deal with the consequences and uncertainties linked to the Gulf War in 1990, September 11, 2001, SARS in 2003, the subprime crisis in 2007-2008, etc. But here, from China to the Americas to Europe, everyone is affected, as well as all business sectors.

“Confinement, only the oldest have experienced it during the Second World War. The times that are coming are going to be difficult. There will be a before and after COVID-19, in terms of our priorities. And I’m not sure motorsport is going to be one of them.”