The Undercut: Renault and the worst launch ever 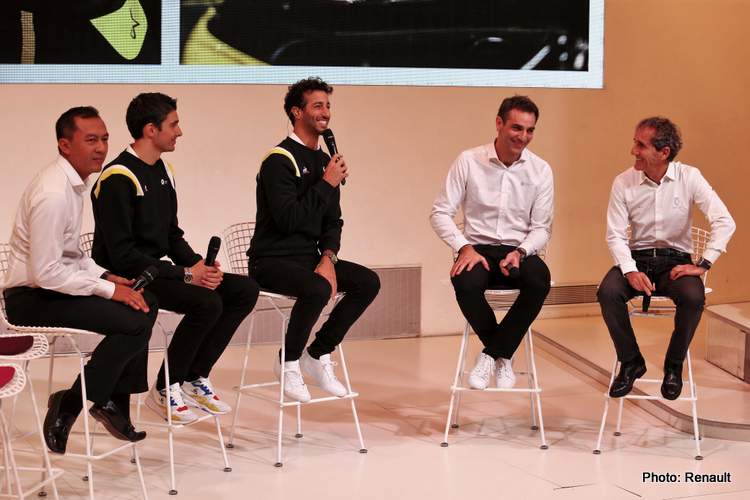 What’s the difference between Groupe Renault and Haas Automation?
Let’s start with Haas. Founded by NASCAR enthusiast Gene Haas, who has a net worth of about $250 million, it’s one of the biggest machine tool builders in the world, employing 1500 staff and with an annual revenue of about a billion.

Groupe Renault, on the other hand, is one of the biggest carmakers on planet earth, selling almost 4 million cars, employing over 180,000 people, and counting up annual revenues of … wait for it … about SIXTY billion bucks.

So while Renault has plenty of cash swilling about in the coffers, it appears that its works Formula 1 team hasn’t updated its computers since the Commodore 64 was all the rage.

On the other hand, the computer renderings put out by Haas of its 2020 car’s new livery were so good that I had to be actually tapped on the shoulder and told they were definitely not real. In fact, at the time of writing, I still had to go back and double-check the press release to make sure I wasn’t making myself look even stupider than usual. But there it is, in black and white, pumped out by the tiny Haas PR department: “digital renderings”.

By this stage, everyone knows that Renault’s recent 2020 ‘launch’ the other day was an absolute joke. For a start, it was certainly the only car launch I can remember that didn’t feature, you know, the thing that kinda matters: A CAR. Cyril Abiteboul explained that he didn’t want to rip people off by launching a “fake” car cobbled together to appear like a new car, only for that to be disingenuously analysed and critiqued online.

But that just doesn’t ring true. He could easily have ordered the painting of a 2019 car in the new livery and explained very clearly that what is being revealed here is the new livery, not the new car. A bit like Mercedes. A bit like we’ve seen dozens of times in the recent past.

A bit like buying a pair of Nikes only to open the box and find nothing inside, is there a bigger possible rip-off than a F1 car launch WITHOUT A CAR?

Instead, it seems as though Cyril booted up an old 286, couldn’t figure out how to switch the colour from black to yellow on Paintbrush, and dusted off his Grandma’s old slide projector to put on display the hilariously amateur ‘digital renderings’ for the most disappointed journalists on earth to unenthusiastically giggle at.

I’ve often used this column to scream at those in charge in Formula 1 to cut the crap and get back to racing basics, but this was just ridiculous. I also don’t want to labour the point about Renault’s abysmally pointless ‘launch’, but it really was one of the worst looks ever not just for one of its major teams, but the sport itself.

A couple of days before the dire event, featuring rickety backyard chairs for the media and delayed an hour, someone at Renault obviously cottoned onto the fact that what was being organised was laughably awful, and put out a tweet entitled: “Excitement levels going up this week!”

In the graphical tweet below that dishonest proclamation, it was explained that the event would not actually be streamed online, and that an actual physical car will not be actually “physically present”. There would, however, be “glimpses” of the 2020 car – which I assume is slang for “the worst digital renderings ever produced”.

Think I’m exaggerating? Take another look at those digital “glimpses” one more time, and instead of playing ‘Where’s Wally’, play this game: ‘Where’s the asymmetrical chassis?’

It’s always fun to make fun of the French, so that’s enough justification for this rant right there, but I really am going to stop flogging the corpse of this dead frog now. It just makes me wonder: does this appear to be a Formula 1 team that is preparing to take on the big guns in 2021? Yes, Renault is looking forward to the budget cap and the new rules.

But name another serious team that won’t shut up about basically sacrificing 2020 altogether? I mean … why? Yes, a decent team sitting somewhere behind the big three could pull out a ‘double diffuser’-style ace with the 2021 rules, or at the very least be ready to leap out of the gates with a machine that is seriously ready to rumble.

But I don’t think I’ve ever heard a serious, well-funded Formula 1 operation – that just had a particularly crap season – declaring quite openly that its 7 hardcore fans should be expecting yet another crap season.

“You never heard from my mouth that I shared the objective of having a podium in 2020 or whatever,” said team advisor Alain Prost, one of the greatest Formula 1 drivers of all time. “We could have a good surprise, but not this year.”

Excitement levels going up, anyone?