The Undercut: Every female only driver initiative should be axed 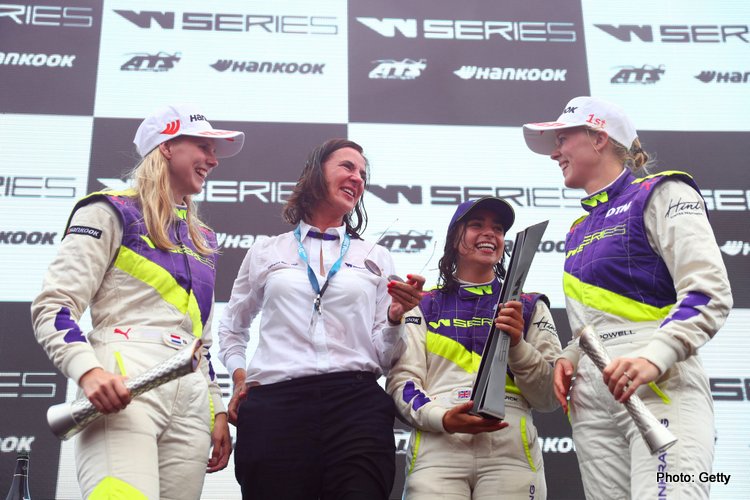 It’s not a particularly impressive boast in our oh-so-woke year of 2020, but I’ll say it anyway: many, many women inspire me (and not just my wife, Mum, daughters and sisters).

Margaret Thatcher was a controversial figure, but she definitely inspired women to think just as big as the men – and potentially achieve much, much more. And now, although standing three centimetres shorter than The Iron Lady did, Sophia Florsch has a similarly lofty message for every girl just like her:

If you look at the official initiatives doing the rounds in Formula 1 and world motorsport today, a cynical onlooker might smell the foul and unfair whiff of tokenism. Think about it this way: with Mattia Binotto applying specific effort to finding a Woman for the Ferrari driver academy, it might be true that a more deserving boy just has to miss out.

But in the name of inclusivity, he’ll just have to be excluded. You can’t make an omelette without breaking a few eggs (or a few boys’ hearts). So be it, goes the logic.

Similarly, the W Series champions the high and supreme principle of diversity above all else, but consider this: Formula 1 formally includes all genders. It always has. The W Series explicitly excludes all men.

These days, everyone seems to be crowing about the need to champion diversity, but I just *have* to offer up a controversial counter-opinion (just for argument’s sake, you must understand). Here it is:

Motor racing has always been open for women.

No, I’m not talking about grid girls, who in the name of inclusion have also been explicitly excluded, banned, rejected, forgotten about. How *dare* some beautiful women earn a good living doing what they do and love best – pull on a sexy little outfit that is three sizes too small for the viewing pleasure of the sport’s core demographic (straight men) (and, presumably, lesbians).

“It seems to be well-off, if not privately-educated then certainly middle-class women, mostly based in London, telling working-class women, many of whom are single parents in the provinces what they can and can’t do,” said one such banned grid girl, model Rachel Reid.

Excluding grid girls is so inclusive, don’t you know?

But I digress: back to lovely Sophia. She was undoubtedly invited by David Coulthard, a male multi-millionaire who in 2017 said that the “mothering gene” makes women unlikely to have that killer instinct to thrive in F1, to join the W Series. But she said no. Let me repeat that: she said NO.

Why on earth what she do that?!

Well, maybe it’s because the W Series uses F3 chassis with a weak little 1.8-litre engine. And the car that Florsch managed to flip over the fence at the terrifying Macau circuit late in 2018 had a higher specification and more power.

Not to mention, of course, that the rivals she was racing against had XY chromosomes, and plenty of them went on not only to win at Macau but had incredibly successful careers in Formula 1, including Michael Schumacher, Ayrton Senna and – yes – Coulthard.

As for the inaugural W Series champion, Jamie Chadwick, Florsch observed: “She now has to do another year in the W Series because she still doesn’t have enough money for Formula 3.”

And this inspiring 19-year-old German didn’t just say no to Coulthard (who once told female reporter Louise Goodman that he was practicing race starts by “imagining they’re your nipples, so I’m being a bit more gentle”.

Florsch also said a pre-emptive no to Ferrari-like driver programs who want women drivers to “stand there to smile and wave”. Remind you of anything?

Can people not understand that those who *actually* care about women in motorsport – like Florsch – don’t look up to those who are champions only of virtue signalling and quota-ticking and inclusivity marketing? They look up to pioneers like, in Sophia’s words, “Michele Mouton”.

Yes, 1982 world rally championship runner-up Mouton, now 68, maybe president of the FIA’s Women and Motorsport Commission, she may have a female-only karting program called Girls On Track, and she may have teamed up with Susie Wolff’s Dare To Be Different campaign, but once upon a time she was as far away from virtue-signalling as was humanly possible – at the wheel of a rally monster surrounded by scores of men who only stopped chuckling when they were roundly and soundly beaten.

And I’m quite sure that’s what Sophia Florsch admires about her.

“My father knew I liked to drive, so he said ‘Ok, I would prefer to see you driving’,” Mouton recalls. Her Dad continued: “I will buy you a car, but I will pay for one year. If you are good, you continue. If you are not good, you stop.” Now that’s what I call a real driver development program!

Spoiler alert: She was good.

Recently, I was watching a long-form debate on YouTube about the sort of affirmative action programs seen in universities and colleges all around the Western world. A beautiful black girl was arguing that programs just like the one that got her into a good college were obviously and inherently good.

But then she was asked if she feels, deep down inside, that she actually *deserves* the place on merit. The fact that she didn’t (and couldn’t) just proudly and honestly exclaim “Damn right!” was nothing short of extremely sad – and her confused and deflated facial expression was the proof.

So here’s the rub: Sophia Florsch was right when she said that all the initiatives that ostensibly promote women in motorsport are basically just “marketing stuff”. And David Coulthard was right when he said in 2017 that Susie Wolff couldn’t take the final step from F1 test driver to F1 race driver for two simple reasons:

Am I (like Coulthard ‘five minutes’ ago) being dismissive of the prospect of women in F1? Not at all! Like Mouton, Danica Patrick and a handful of others, there already is – and always has been – the only driver program for women that actually works and is 100% fair and inclusive. Gentlemen and ladies, it’s called ability.

It would break my heart if the next female F1 driver felt like that beautiful black Somali-American girl, who wondered deep down if she even belonged on the grounds of that top American college. Rather, I want her to feel like every other grand prix winner and champion who has ever lived – like she absolutely earned every drop of that sweet, sweet champagne.