Gasly: Marko told me I was going to stay until Abu Dhabi 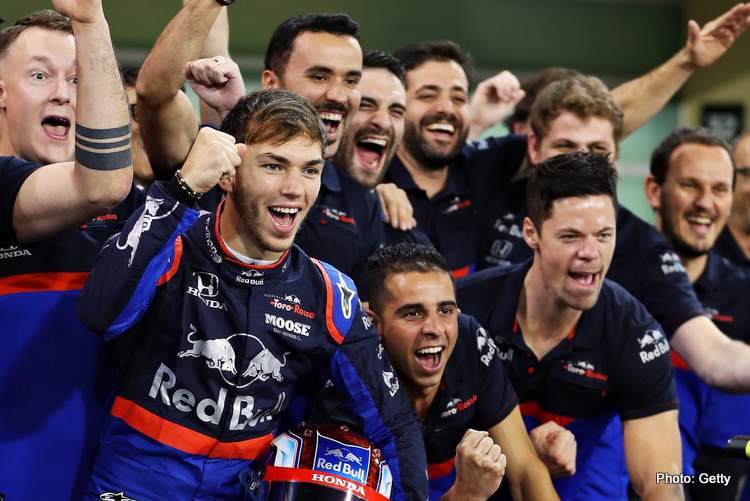 The ruthlessness of Red Bull’s driver programme was well illustrated when boss Helmut Marko demoted Pierre Gasly to Toro Rosso after the Frenchman failed to cut it during his first six months as Max Verstappen’s teammate.

Credit to Gasly for overcoming the crushing blow to his career by resetting and rebuilding his confidence, and career for that matter, with some solid results for the fizzy drinks juniors. The second place in Brazil for Toro Rosso was the highlight of his season and in his own words: “My best race ever.”

In the wake of a challenging and character-building season, speaking to L’Equipe, Gasly reflected on the 12-month roller-coaster he has been including the demotion, “When I received the call to inform me about the news, I was upset because I found the decision unfair.

“I was also frustrated with those six months at Red Bull. I was only at 80% of my capabilities, but also because I had not been given the means to do better. But I decided to turn this frustration into positive energy, to rebound.

“Rather than talk too much, especially to the media, I just said I would give my answers on track. I wanted to prove with my results that the speed was still there.”

Gasly stepped up to Red Bul at the end of last season te replace Renault-bound Daniel Ricciardo. Thereafter the tale is well told; first he crashed the team’s test car then was simply no match for Verstappen in the sister car when the racing began.

After Hungary, Marko pulled the plug and promoted Alex Albon and exiled Gasly back to the junior team. A harsh move at the time, but not unexpected considering the history of the organisation’s driver management.

Gasly explained, “There are some things that must stay between the team and me. F1 is a ruthless world, where there is sometimes a lot of money, politics.

“And it would be naïve not to take into consideration all the elements behind such decisions. Helmut promised me things, especially regarding changes to the car. He told me that I was going to stay until Abu Dhabi.

“Some promises were not kept. I was disappointed with all that, but in F1, I know that it’s not just performance that counts. I prefer to focus on myself. There are some things I could have done differently too, I’m aware of that.

“But I’m only 23 years old, I have the ambition to be world champion one day, so I look ahead, and all I experienced this year will serve as a lesson.”

Gasly also made a point of praising his family and their role on his journey to the pinnacle of the sport, “Without them, none of this would have been possible. When I was karting, my father was my mechanic and one of my brothers came to help too.

“At 12-13, I put my parents in a difficult financial situation to allow me to live my dream. They made sacrifices, and my four brothers too, because they agreed to focus on me. It adds to the pressure.

“Despite my young age, I was aware of it. And at the time, I was a long way from F1. I always had to fight to get what I wanted, and that helped to shape my character. They always said to me: we give you what we can, do your best with this to get as fast as possible.

“So today, I’m happy to be able to take them to an F1 paddock, it is my way of thanking them,” added Gasly who finished seventh in the 2019 F1 World Championship.