Toro Rosso: We look forward to a reasonable performance 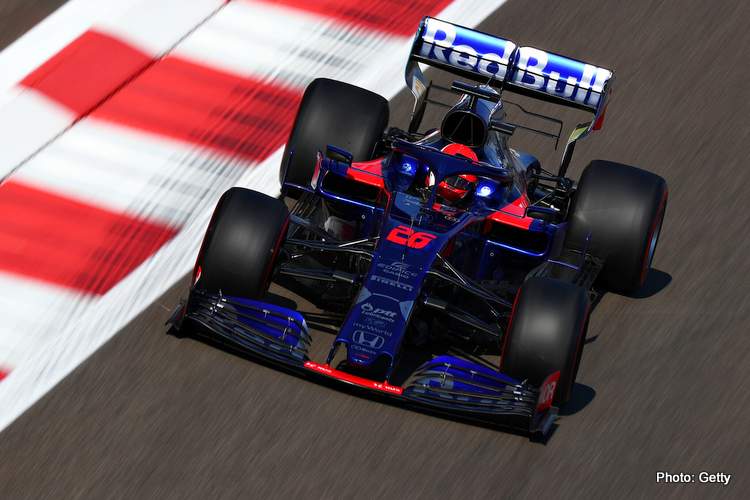 Toro Rosso report from day one of the Abu Dhabi Grand Prix weekend, Round 21 of the 2019 Formula 1 World Championship, at Yas Marina Circuit in the United Arab Emirates – the final race of the season.

“It was a productive day, FP1 wasn’t so important as the conditions are different to the conditions we race in, but it’s still useful to get some reference points and see how the car behaves. FP2 was also productive, all of the laps were important because the conditions are more representative for the race, so it was good to put so many laps in during the session. We’ll see when we study the data tonight what we need to do with the car for tomorrow. I felt quite good with the car today, but it doesn’t mean we can stop working and leave everything like this, things change over the weekend and we need to adapt.”

“It was a bit of a messy FP1 between the red flags and getting blocked on my second run, so it wasn’t an ideal session as we didn’t do many laps. The good thing was we were still able to test a couple of things we had planned. FP2 was a better session, as between the two cars we completed more testing ahead of Qualifying and the race, so now we have good things to analyse to decide what’s the best configuration for tomorrow. I’m happy with this afternoon, the long-run pace was strong and I think there’s more to come in the short runs. To finish in the top ten today makes us feel positive.”

Jonathan Eddolls, Chief Race Engineer: “We didn’t have the easiest FP1 session today and this was reflected on the timing sheets. We ran the Option first followed by the Prime, which was never going to help flatter us, and we came here with a number of test items, which were unfortunately interrupted by the red flags. This means we were a little bit on the back foot during that session.

“Yas Marina is a track where it’s easy to get stuck in traffic, and this happened particularly to Pierre as he struggled to get a clean lap. For Dany, the car balance was quite good in FP1, while Pierre struggled a little bit more. We did a lot of analysis on the data and made a number of changes going into FP2, so we had a cleaner session this afternoon.

“We were able to show the true competitiveness of the car over the short runs with both cars ending the day in the top 10, which is where they should be, so that was positive. In the long runs, the Option tyre showed to be quite stable, but there is still some work to do, particularly if we make it to Q3 tomorrow as it would be the race start tyre.

“The performance on the other two compounds on the long runs looked pretty good, so there’s still a lot to analyse tonight, but I think we can look forward to a reasonable performance for the rest of the weekend.”