Renault: We did not surrender and kept focused 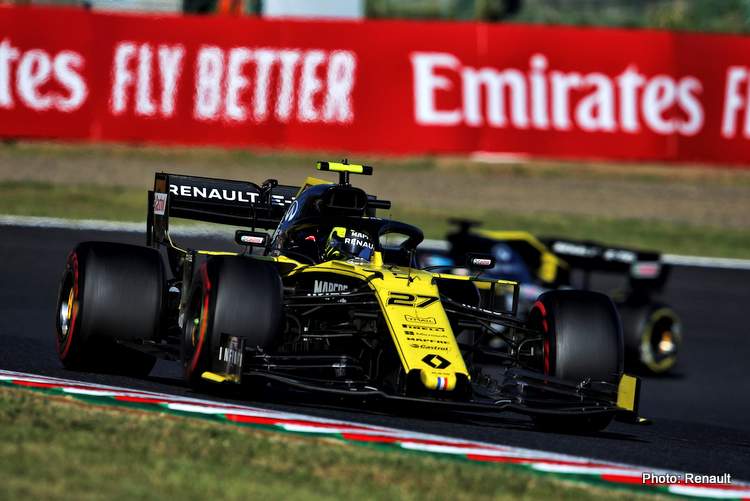 Daniel Ricciardo mounted a valiant comeback from sixteenth on the grid to claim seventh, while Nico Hülkenberg crossed the line ninth*, six places up on his starting position.

Yesterday’s typhoon delay led to a Super Sunday, with qualifying and the race held within hours of each other. Strong winds prevailed for the morning’s qualifying session and picking a way through the gusts was a genuine challenge.

Daniel was eliminated in Q1 as he struggled to find a balance in the oscillating conditions, while Nico made it through to Q2. His effort was, however, subsequently halted by a hydraulic leak on his second Q2 run, placing him fifteenth.

Nico made a stunning start and picked up five positions by the end of lap one, with Daniel too knocking on the door of the top 10 after passing a number of cars in the early running. A creative one-stop strategy gained further positions and both drivers got the bit between their teeth with a series of thrilling overtakes through the field.

The team leaves Suzuka with a further seven points in its account.

“I’m very happy for the team today, with both Daniel and I inside the points. We fought all the way, pushed really hard and everything seemed to come together. It was an amazing recovery from this morning where our qualifying wasn’t so good.

“Personally, I made a great start off the line, passed a few cars at turn one and then pushed on with good track position. From there, it was a fight. The whole second stint we were in traffic and by the end, it was getting hot and tasty out there with everyone’s tyres going off. It was really good fun and I’m pleased with today.”

“The team deserved this result today. We’ve been on a bit of a frustrating run recently without scoring, so to take seventh today is excellent. We had an issue in qualifying with the rear of the car that the boys fixed, which explained why we were quite far down. We had good pace in the race and were coming through quite nicely.

“Starting on the Medium tyre worked to our advantage and we came through the pack with some enjoyable battles. It was nice to execute a good strategy, we pulled through and, in the end, it was a deserved and quite comfortable seventh place.”

Cyril Abiteboul, Team Principal: “It has certainly been a bizarre weekend, with no running on Saturday, requiring everything to be perfect from the get-go on Sunday morning. Unfortunately, we experienced the opposite, with both cars having different issues in qualifying.

“Despite our low starting positions, we did not surrender and kept focused. The crew did an amazing job in the limited time before the race to turn around the cars.

“Both drivers had clean starts for the first time in a while and after the opening laps it was non-stop action, with an amazing number of stylish overtaking manoeuvres from Daniel and Nico.

“Nico also accepted to play the team game, which played out nicely for the team, so big thanks to him. We’re leaving Suzuka with both cars in the points, a nice reward for the various issues we’ve had over the last races despite a car that had the capacity to score at every race.”