McLaren: The car was strong here 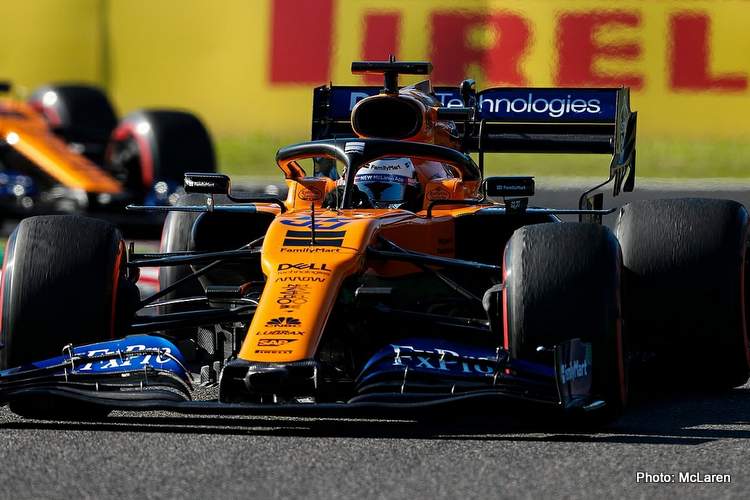 McLaren report from the Japanese Grand Prix, Round 17 of the 2019 Formula 1 World Championship, at Suzuka Circuit.

“A very good day in general. Qualifying was extremely strong after leading the midfield on Friday. We secured P7 and P8 clearly ahead of our main competitors. Later, in the race, I had a good start on the inside line and fought again wheel-to-wheel with Hamilton. From there I controlled my pace and went for a long first stint.

“The second stint was especially strong, with very good pace and keeping Leclerc behind to secure another P5. I’m very happy with both results today, quali and the race, and the only downside is that Lando couldn’t finish in the points due to an unlucky situation. The team clearly deserved another double-points finish here in Japan. Congratulations!”

“A frustrating day. I made a really good start and managed to get to the outside of a few drivers at Turn One. Then there was contact ahead of me, debris and guys spinning. I had to slow down, unfortunately, and gave up a position or two but was still P6 I think.

“In the chaos, I collected some debris in the brakes, which meant I had to box really early on and then the rest was pretty straightforward. I did what I could but I always struggled towards the end with the tyres and just couldn’t make enough progress to come back through. Some positives, some negatives – but good points for the team from Carlos.”

Andreas Seidl, Team Principal: “Great execution today from the entire team, and 10 more points in the bag, extending our lead over the teams with whom we are fighting in the Constructors’ Championship. It was a sensational drive from Carlos to P5 – but we have mixed feelings because we might’ve had Lando up there as well.

“We obviously strongly disagree with competitors leaving cars on track with entire front wing endplates hanging off and putting everyone else at risk. After Leclerc’s endplate finally exploded, Lando, unfortunately, caught some of the debris in his right front brake duct. This meant he had to box early, and his race was pretty much done. Even then, he gave it everything and put in a great performance.

“Overall, it’s the positives we take away from Suzuka. The team here at the track, together with the support from home, put in a lot of hard work to get the best out of an unusual weekend – and a very long Sunday! The car was strong here and we’re really looking forward to the final four races.

“Finally, congratulations to Mercedes for securing their sixth Constructors’ World Championship in a row.”