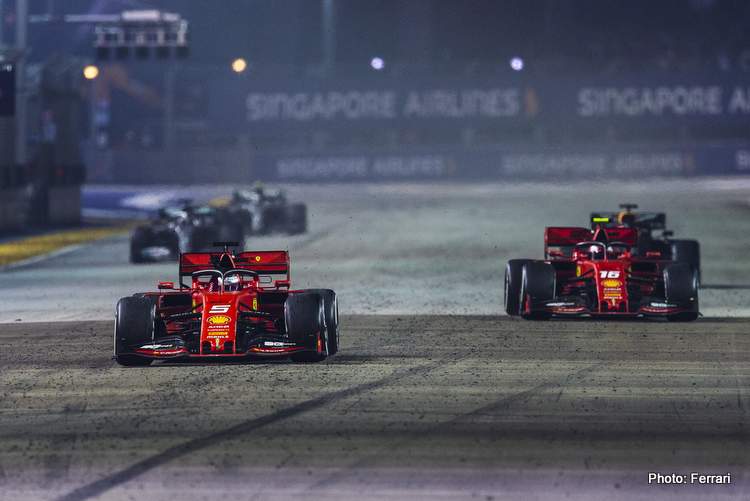 Charles Leclerc was fuming when he emerged from his pitstop behind his Ferrari teammate, and eventual winner, Sebastian Vettel during a strange Singapore Grand Prix.

Up until that point Leclerc had appeared to be in control of the race, having led from pole position, albeit at a ridiculously slow pace as the front-runners played cat-and-mouse on tip-toes.

On lap 19 Ferrari found a window of opportunity that could play in their favour and decided to pit Vettel on the spur of the moment. It proved to be an inspired call as it turned a first and third for the Reds into a one-two, but Leclerc in second was not happy.

When the penny dropped the he made his feelings known from the cockpit, calmly and controlling his anger he assured his team, “I won’t do anything stupid, I want us to finish one-two. I just don’t think it’s fair.”

Afterwards, Leclerc revealed that he was not aware of the call to pit car #5 so early, “I was surprised because I was not aware in the car, but I guess that if this decision has been made it was for the good of the team and it had been the only way for us to do one-two.

“So if that’s the case I completely understand it but obviously from the car, it’s frustrating. So not completely happy today, but the overall result of the weekend is very positive.”

The truth is that Ferrari were also surprised, as they expected Leclerc to have enough to emerge in the lead after he stopped, but the pace had been inexplicably slow while with fresh rubber, Vettel put in fast laps (in and out included) which in the end were enough to do the business.

Leclerc’s strategy guys missed a trick (or by intent?) and kept their guy out without telling him to step up the pace to cover his teammate’s sudden undercut opportunity.

The Monegasque explained, “I don’t know if I could have stopped earlier. I’m pretty sure it was not possible because otherwise, they would have done that because you normally don’t undercut one car with the other in the same team. I’m pretty sure this was the case but I need to know the situation.”

“I don’t think I could have done many things better or differently,” Leclerc told reporters, “The only thing is I would ask a bit more about the strategy around me and who is pitting and who is not because I was not aware.”

“So I didn’t know if I should have pushed a bit earlier in my first stint. I don’t know… we have plenty of data so I will analyse it,” he added.

It might have been three wins in a row for the 21-year-old Ferrari sensation but instead his teammate Vettel found his winning ways after a year and a bit off the top step of the podium, but Ferrari have a race-winning weapon and they have finally found a path to updates that actually work.

There will be many more days like these when the driver power-struggle within Ferrari dithers on the fine-line between peace and war. Leclerc diffused the situation by his humility in defeat, but be sure he learned a lesson and it will be fascinating to watch his intricate duel with Vettel will evolve.

Big Question: Did Ferrari make the right call on Sunday?

How to sum up essere Ferrari in one photo 😍