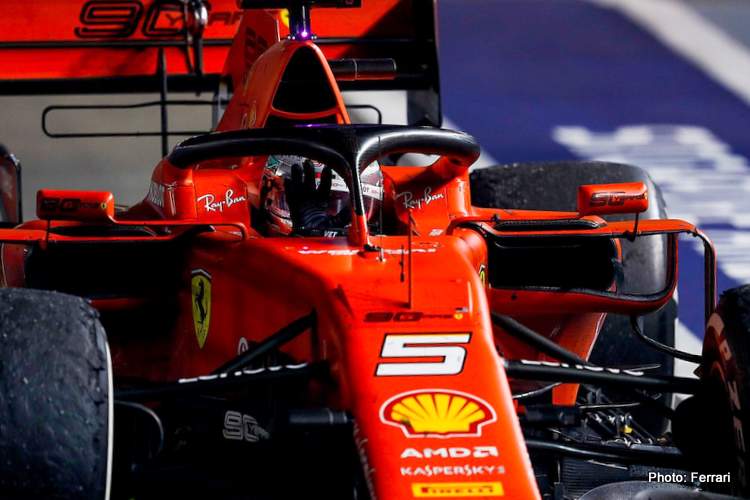 Ferrari driver Sebastian Vettel won the Singapore Grand Prix for the fifth time in his career when he took victory in a wacky race that featured three safety car periods and never really got going despite the explosive ingredients i9n the mix. 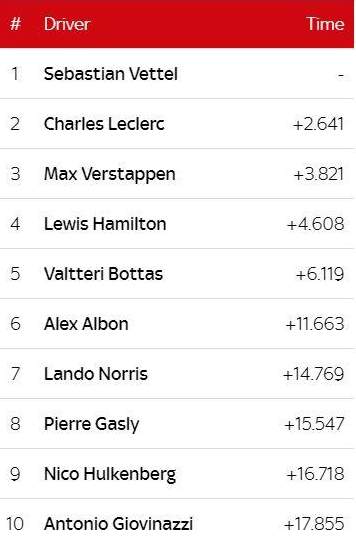 From early on it was clear that the front-runners were wary of the attrition, nursing tyres and after a relatively subdued start held station at a remarkably slow pace, even slower than George Russell’s tardy Williams which was in clean air after pitting for repairs.

At that point, Charles Leclerc led his teammate, with Lewis Hamilton and Max Verstappen chasing as well as Valtteri Bottas and Alex Albon in close contention.

The pitstops proved to be crucial as Vettel nipped in first for new rubber, with Leclerc leading and kept out longer. This proved to be the turning point as the #5 car emerged in the lead where he remained until the end, enduring three safety car periods in the process.

The German ended a winless streak that stretched over a year – 392 days to be precise – to his last triumph at Spa in 2018, thus a victory he sorely needed as his teammate had stoled the limelight since the championship resumed earlier this month.

After the race, Vettel – who was voted Driver of the Day – shed light on the strategy, “It was a very late call, I thought it was a bit early. Then I just gave it everything in the out lap because I saw the cars in front of me not pitting, especially Lewis. I was quite surprised a lap later to come out ahead.”

He also explained that the decision to pit early was made on the fly, “Just the corner before, like 21, I received the call. I don’t know if somebody pitted or the gap was big enough, but for me it worked today.”

Leclerc was disappointed to be second due to a pitstop and he could not resist questioning the strategy and declaring his dissatisfaction with the way things turned out. Nevertheless, it was the first-ever one-two at Marina Bay by a team since 2008 and the Monaco Kid grasped the significance.

From that point, he took the defeat on the chin, shaking hands with his teammate as they alighted from their respective cars. But little was said between the pair in the pre-podium room.

He said in parc ferme, “It’s always difficult to lose a win like that, but at the end it’s a one-two for the team. Disappointed on my side as anyone would be, but sometimes it goes that way.”

And that’s 5⃣ under the lights of Singapore!#F1 #SingaporeGP pic.twitter.com/E0MRSAxqlG

Red Bull’s Max Verstappen was always there or thereabouts on his way to third for Red Bull, beating the Mercedes duo of Lewis Hamilton and Valtteri Bottas who ended fourth and fifth respectively. Their much-vaunted race pace went missing when needed on the night.

Furthermore, they opted for fresh rubber to track position, but any advantage was nullified by the safety car periods – each one playing into Ferrari’s hand. It would be fair to say that they got their sums wrong today.

Red Bull rookie Alexander Albon stayed glued to Bottas’ rear-wing for much of the race and brought it home sixth on what was an impressive first race at a tough venue.

Lando Norris again sent his shares soaring with a solid display to finish seventh and Best-of-the-Rest in the McLaren, the youngster did not put a foot wrong at a venue that punishes the smallest of mistakes.

The two rookies are proving to be great finds for their respective teams.

Pierre Gasly gave a good account of himself after going toe-to-toe with just about everyone in the field to claim eighth place for Toro Rosso.

Nico Hulkenberg survived a first lap fracas to bring the Renault home in ninth, ahead of Alfa Romeo rookie Antonio Giovinazzi who drove one of his best races to date.

The walls of Marina Bay Street Circuit claimed victims, the first one to trigger a safety car was George Russell whose Williams got a nudge from the Haas of Romain Grosjean and ended up in the wall; followed by Daniil Kvyat who was too ambitious on the brakes, the Toro Rosso clattering into Kimi Raikkonen’s Alfa Romeo and braking the front-right of the Alfa Romeo.

Sky F1 pundit Martin Brundle summed up: “What’s significant here for Ferrari is that they’ve won three races in a row on three totally different race tracks. They are really back in business.”

Race winner – and your Driver Of The Day 🏆

A great Sunday in Singapore for Seb 👌#F1 #SingaporeGP pic.twitter.com/T0NSDCRmrO

At the race start the top six got away in grid order with pole sitter Leclerc of leading from Hamilton, Vettel and fourth-placed Max Verstappen. Valtteri Bottas was fifth in the second Mercedes, with Red Bull’s Alex Albon in sixth.

Behind them Renault’s Nico Hulkenberg clashed with McLaren’s Carlos Sainz and they both dropped to the rear of the field. That allowed Lando Norris in the second McLaren to slip through to seventh place ahead of Alfa Romeo’s Antonio Giovinazzi, Haas’ Kevin Magnussen and Toro Rosso’s 10th-placed Pierre Gasly.

The first stint then became a game of tyre management as the leaders preserved their starting softs in order to go deep enough into the race to clear the midfield should they pit.

Vettel was the first to make the move, with the German pitting on lap 19,m along with Verstappen. Leclerc was next in but after his stop he emerged behind team-mate Vettel, much to his dismay.

At the front, Hamilton now led the race. Despite admitting that his tyres were “not great’ the Briton stayed out until lap 26. And when he rejoined he did so behind Max.

The race was now led by Alfa Romeo’s Antonio Giovinazzi with Toro Rosso’s Pierre Gasly in P2 ahead of Ricciardo, all of whom needed to stop. Vettel soon made his way past all three and on lap 30 he assumed the lead of the race. Leclerc and Verstappen followed suit and as the order settled Vettel led his team-mate by six seconds, with Verstappen three seconds further back in third place. Hamilton was now fourth.

The race was neutralised on lap 35 when Haas’ Romain Grosjean made a mess of an ambitious overtake of Williams’ George Russell into Turn 8 and ended up pitching the young Briton into the wall.

The SC left the track at the end of lap 40 and when racing resumed, Vettel held his lead ahead of an unchanged top 10. The green flags lasted just three laps, however. On lap 44, Sergio Pérez was told to stop his car and the Racing Point driver pulled over at the side of the track, leading to a second Safety Car deployment.

The SC stayed on track until the end of lap 47 and when the action resumed it was again a clean re-start but within three laps the pace car was back on track as Kvyat collided with Räikkönen in Turn 1 and both arrowed off into the run-off area.

This time the cautionary period was shorter and on lap 51 the race got going once more. Vettel again controlled the re-start well and over the final 10 laps slowly began to edge away from his team-mate to eventually take his 53rdcareer victory and his first win since Belgium last year ahead of Leclerc. And Verstappen. Hamilton was left with fourth place ahead of Bottas, and Albon took P6 for the second race in a row.

Behind the Thai driver Norris was seventh for McLaren ahead of Gasly. Ninth place was taken by Hulkenberg and the final point on offer went to Alfa Romeo’s Giovinazzi. 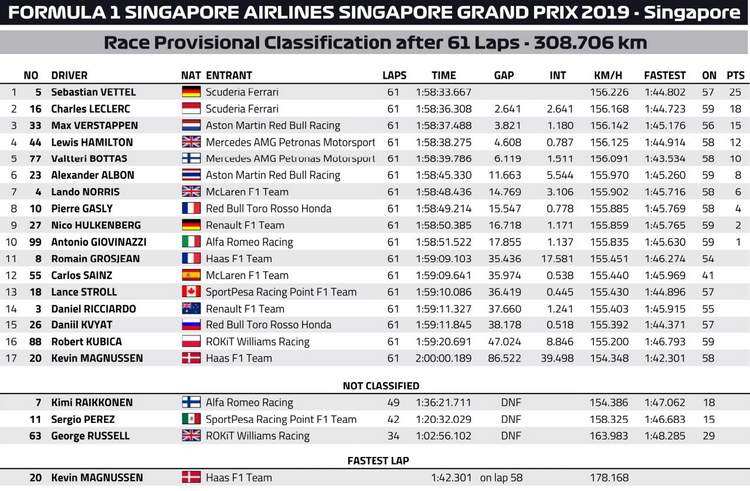 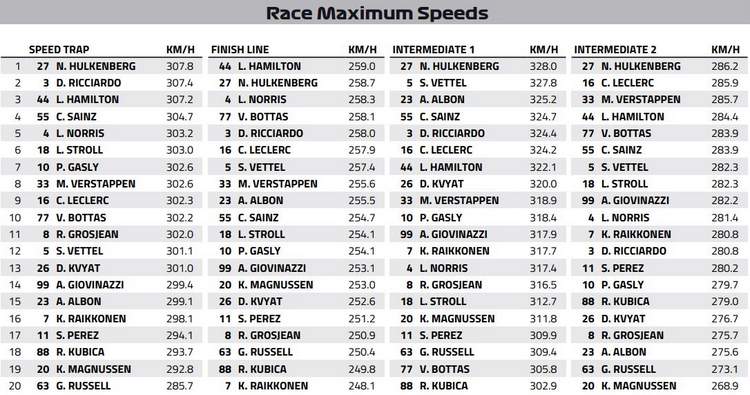 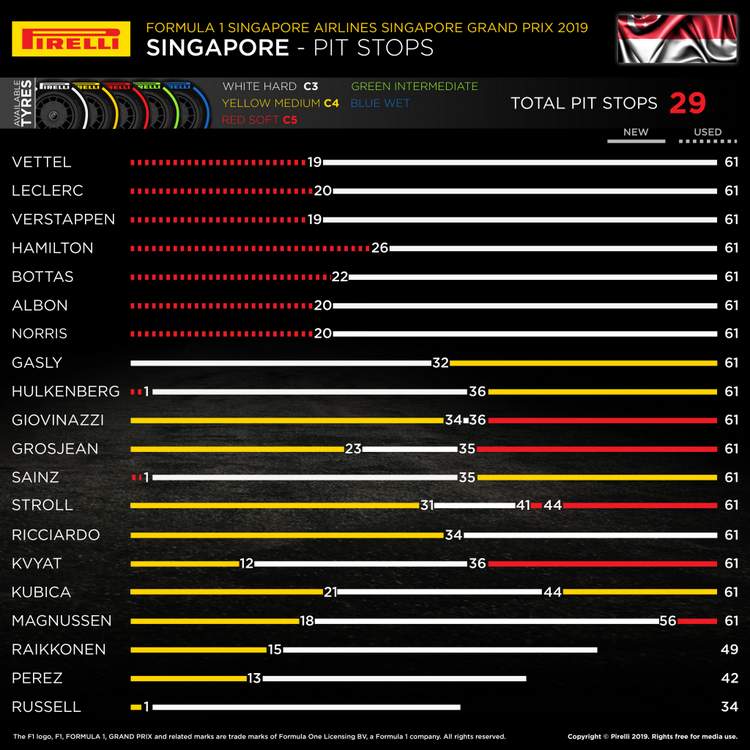 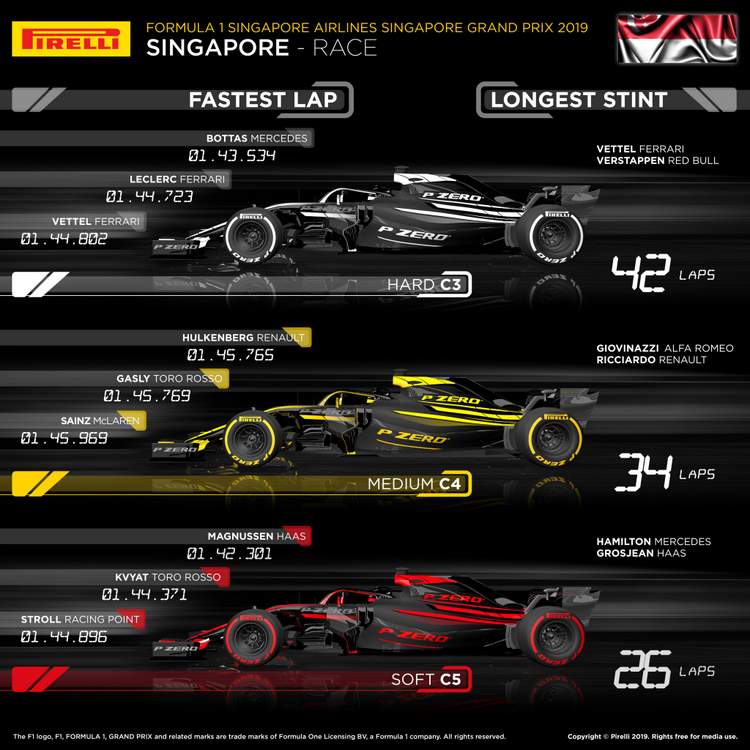 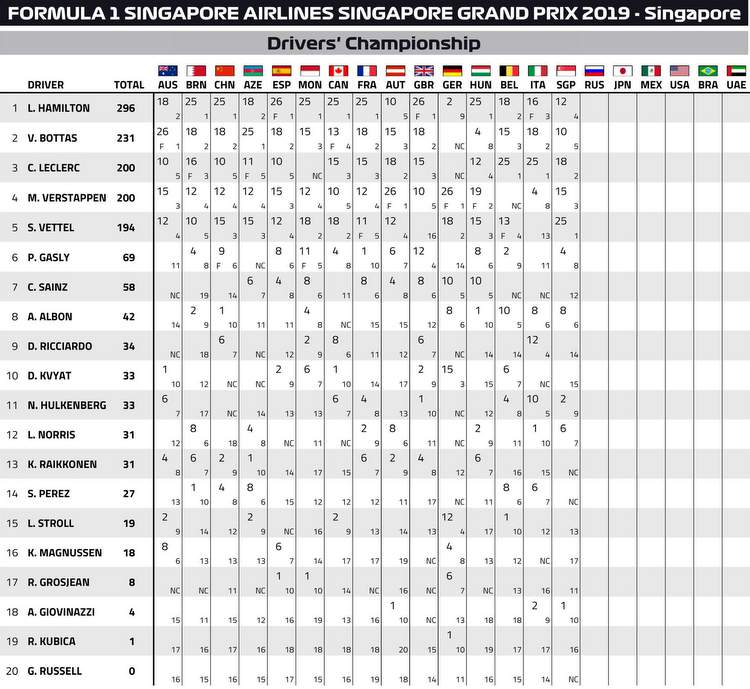 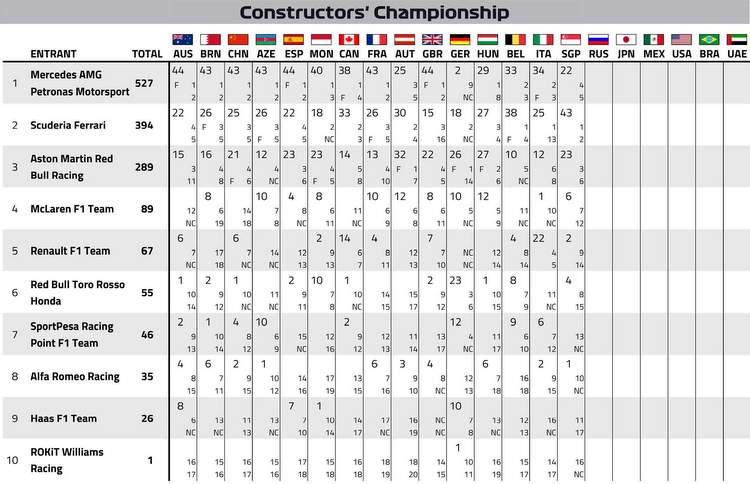