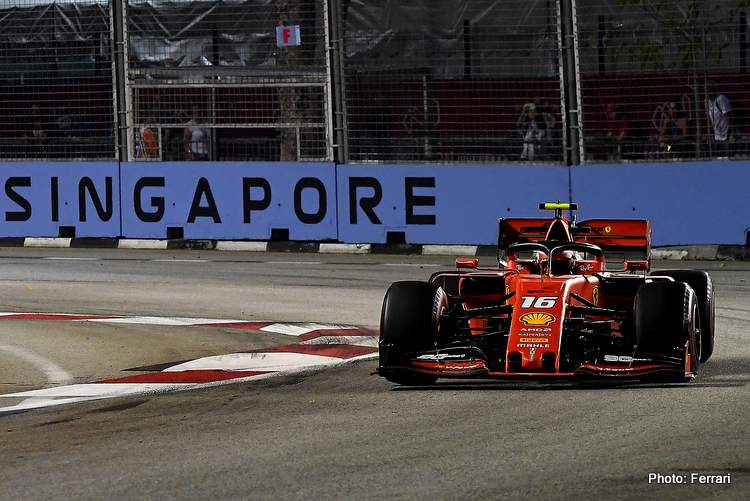 Ferrari driver Charles Leclerc topped the timing screens after an enthralling qualifying for at Marina Bay Street Circuit and will start the Singapore Grand Prix from pole position, his third top spot start in as many races.

Out of the blue and against expectations Ferrari found some impressive pace in time for qualifying after a Friday of niggles. And as a result, Leclerc deposed his teammate Sebastian Vettel, who at one point looked good, from top spot on the timing screens and managed to keep the Mercedes of Lewis Hamilton at bay, the Briton managing to edge into second with his effort.

Maximising the momentum from victories at Spa and Monza, Leclerc delivered yet another superb lap to take pole with a best time of 1:36.217 while Hamilton’s best shot was 0.191 of a second shy of the pole-winning time. The pair going faster with both their final runs.

It was the Monaco Kid’s third top spot start in three races, and the fifth time he will start from pole to date

Leclerc said afterwards, “It was a very good lap, there were some moments when I thought I had lost the car. I would like to thank the team so much for what they’ve done. The team has done an amazing job and I’m extremely happy to be on pole. We had a very tough Friday, yesterday was not my day, but I worked hard in the car and it paid off today.”

Ferrari brought to Singapore an upgrade for the SF90 in an effort to harness more grip for the power they have at their disposal. A new floor was among the bits they bolted on to the car but the sweet spot appeared to elude them on a “long and tough” Friday for the Scuderia.

Things changed dramatically today as the Leclerc and Vettel were able to strut their stuff and caught just about everyone off guard in the paddock including team chief Mattia Binotto who is either a great poker player or like most: surprised.

He told Sky F1, “It’s even better than we hoped. We brought a new aero package, but the race is tomorrow and we shouldn’t forget that but it’s always nice to start at the front in Singapore. I still believe [Mercedes] are very strong.”

Hamilton was among the many confounded by the pace shown by the Reds, “I don’t know where Ferrari picked up their pace because this is not known to be one of their tracks, but they did a great job. Charles really put some great laps in and I needed something special at the end, so I gave it absolutely everything I had.

“It was very, very close – I’m sure I nearly hit the wall a couple of times – but it was as much as I could get out of the car. I’m really, really happy to be on the front row in the mix with them [Ferrari] and try and divide them tomorrow,” added Hamilton.

Vettel came alive with his first Q2 run but aborted his final attempt which dropped him to third, two-tenths of a second down on Leclerc’s best effort.

The German summed up his session afterwards, “The final one should’ve been better but overall the car was making sense feeling good. Maybe I peaked a bit early, we had a tiny wobble [on his second run] and there was no point in finishing that lap.”

“It puts us in a good position tomorrow. It should be a good race, let’s see what the tyres are going to do if we can push for the two hours or will we have to manage them,” added the four-time F1 World Champion.

More was expected of Red Bull and Max Verstappen, but with everything dialled to the maximum the package was half a second down on the pole time, nevertheless good enough for fourth.

But the Dutchman was disappointed, “The car felt alright but just not enough grip and I wanted to go faster but the four wheels were sliding. A little bit surprised after a positive Monza we would expect to be really strong here and we weren’t. We are too slow.”

Valtteri Bottas was fifth albeit eight-tenths down on the sister car, the Finn enduring a niggle packed weekend thus far and despite setting the Q1 pace was never really in it.

Rookie Alexander Albon was sixth, the Red Bull driver half a second shy of his teammate in his first visit to Marina Bay Circuit.

McLaren’s Carlos Sainz was Best-of-the-Rest in seventh, 1.6 off the benchmark pace but a quarter of second better than the next best Daniel Ricciardo in eighth, the Renault driver followed by teammate Nico Hulkenberg in ninth and Lando Norris rounding out the top ten for McLaren.

The top three then opted to remain in pit lane for the final runs. Mercedes, however, chose to send its drivers out on softs and Bottas took first place in the session with a lap of 1:37.317, 0.248s ahead of Hamilton, with Leclerc finishing third ahead of Vettel and Verstappen.

Eliminated at the end of the first session were Daniil Kvyat of Toro Rosso in P16 followed by Racing Point’s Lance Stroll, Haas’ Romain Grosjean and the Williams cars of George Russell and Robert Kubica.

In the first runs of Q2 Leclerc was again to the fore, with the Monegasque driver becoming the first man to dip below 1m37s with a lap of 1:36.930 that he then improved to 1:36.650. Vettel took second place, seven-hundredths of a second behind his team-mate.

Hamilton was third for Mercedes after a second run that yielded an improved time of 1:36.933. That left Verstappen in fourth place thanks to his first-run time of 1:37.089.

Bottas made it through to the final segment in fifth, the Finn finishing ahead of Lando Norris who put in an impressive lap of 1:37.572 to bump Red Bull’s Alex Albon to sixth place. The Thai driver finished ahead of Carlos Sainz in the second McLaren and the Renaults of Daniel Ricciardo and Nico Hulkenberg.

In Q3 Vettel drew first blood and took top spot with a time of 1:36.437 marker. That put him over three tenths ahead of Leclerc who set a time slower than his Q2 best and Verstappen who logged a lap of 1:36.817. The Mercedes drivers were fourth and fifth. Albon posted a time of 1:37.964 to take P6, slightly slower than his Q2 effort.

However, Vettel couldn’t hold onto P1. Mistakes in the first sector of his final lap saw him back out of his last lap and that allowed Leclerc to grab his fifth career pole position ahead of Hamilton.

Vettel kept hold of third place on the grid ahead of Verstappen. The Dutchman did make a small improvement on his final lap, of three-thousandths of a second, but it was not enough to get near the second Ferrari. Bottas again finished fifth but Albon got to within three-tenths of the Finn after improving by half a second on his final run.

The Thai racer will thus start at the back of row three ahead of Sainz, the Renault duo of Ricciardo and Hulkenberg followed by the second McLaren of Norris. 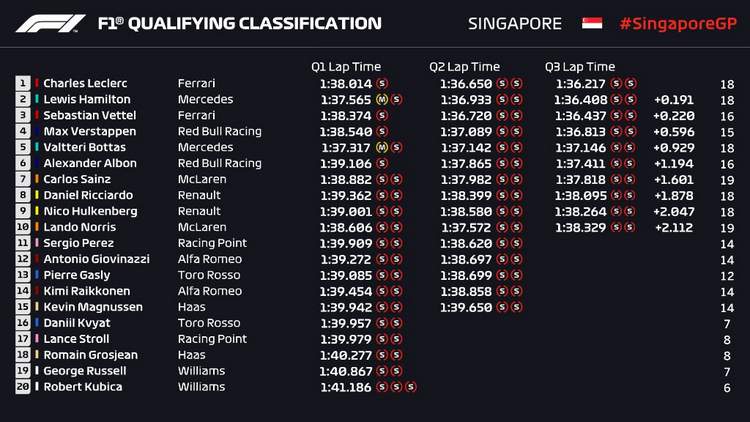