No normal afternoon at Ferrari HQ in Maranello 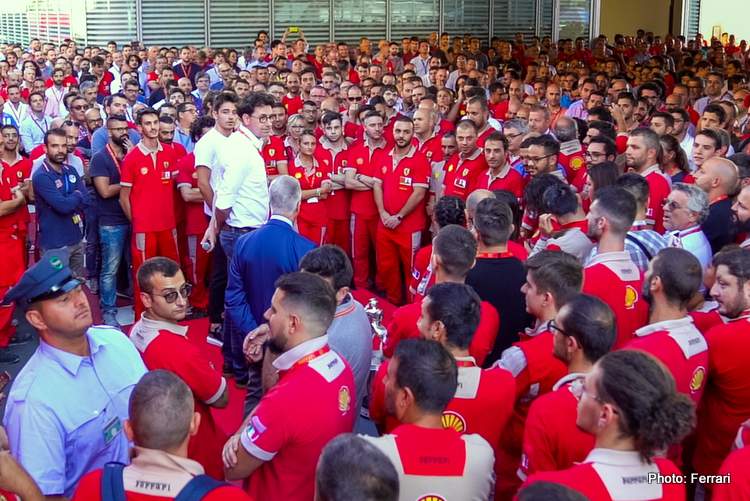 It wasn’t quite the normal afternoon at Scuderia Ferrari headquarters in Maranello today when, shortly after 4pm, Charles Leclerc and Team Principal Matteo Binotto joined the entire staff to toast the wins in both the Belgian and Italian Grands Prix.

And Sebastian Vettel was also there, by telephone link.

An important moment. As he addressed the gathering, Binotto stressed that in both cases, the wins were a team effort. “In Belgium and Italy we won because of the efforts of the entire team. The low downforce package delivered the expected results and the engine already performed very well in Belgium, while the Spec 3 version we introduced in Italy was good enough to fend off our opponents even when they used DRS.

“Along with the aerodynamics and the engine, the strategies and pit stops were perfect and the combination of all these factors meant Scuderia Ferrari finally took its first wins of the season, after victory had slipped from our grasp a couple of times in the early races. In Spa-Francorchamps, Sebastian also played a vital role in helping us reach our objectives.”

It was around this time that Seb’s phone call was patched through and he congratulated the team, as well as thanking them for the support so many of them had given him after the difficult race in Monza.

Non-stop autographs. Charles then said a few words, as everyone raised a glass of champagne. “I think I’ve just lived through eight unforgettable days. To win twice in my first year in Formula 1 is incredible and it’s mainly down to you, especially after the first part of the season was a long off way our expectations.

“The week in Monza was fantastic and Seb and I were both electrified by the welcome we got from the tifosi in Milan and that was even more motivation to do well in Monza.

“When I was in the car fighting, I could feel the support of the people in the crowd and when I crossed the finish line it felt so liberating. Therefore, thank you to all of you.”

Once he’d put down the microphone, Charles’ work for the day really began, as he signed hundreds of autographs for all those who work so hard in Maranello and who didn’t want to miss the chance of getting a T-shirt, a cap or a card signed, as well a posing for a selfie with the youngest ever Scuderia Ferrari driver to win a Formula 1 Grand Prix.