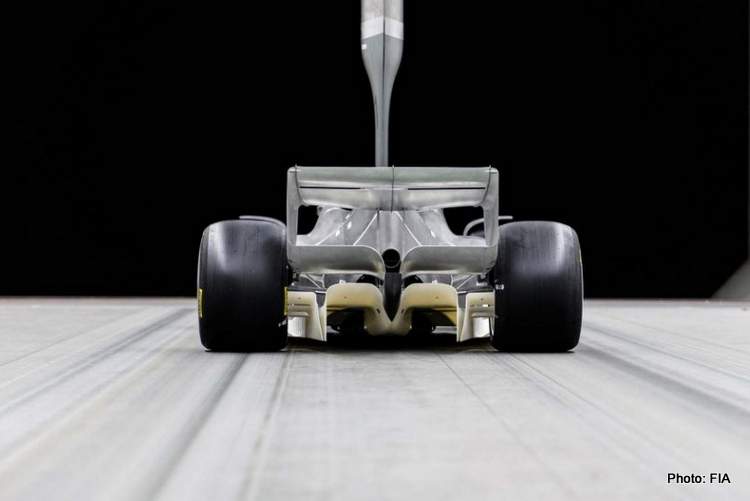 The FIA have released digital imagery of what 2021 Formula 1 cars could look and video of an iteration of the 2021 car undergoing testing in the wind tunnel.

This is what the sport’s governing body had to say with regards to the rules process and the situation ahead of their publication in March:

What has been happening?

In shaping the rules for a new era of grand prix racing in 2021, the FIA and Formula 1 have completed an unprecedented amount of research and development using CFD to make their vision a reality. The next step was to confirm that data with tests in the wind tunnel.

So last month, ahead of the German Grand Prix, a model of the latest 2021 iteration was put in the Sauber wind tunnel under strict conditions of secrecy. It came after a first run in January, where a 2018 60% model was used, and a second run in March, when an iteration of the 2021 car was tested with 13-inch wheels.

While the general results will be shared with all teams, Sauber’s independent consultancy group ran the wind tunnel ensuring that their F1 team gained no advantage.

In the video above, you get a rare glimpse into a wind tunnel with the 2021 50% scale model running for the first time with 18-inch tyres. There is a rake moving up and down behind the car to measure the airflow behind the car allowing F1 and the FIA to monitor the wake as they bid to improve a car’s ability to follow another.

“Typically teams would not use a rake in this position because teams don’t really care about the wake of the car,” explains FIA Head of Single Seater Technical Matters, Nikolas Tombazis. “That’s not a criticism; teams are simply trying to maximise the performance of their own car, which is completely understandable. We, however, are more interested in what happens behind the car. The fundamental point of all of this is that we are trying to reduce the losses that the following car would face.”

Pat Symonds, Chief Technical Officer at Formula 1 adds that while the bulk of the development work taking place has been conducted using CFD (Computation Fluid Dynamics) the wind tunnel tests offer a real-world validation of the modelling carried out in the virtual space. “While the CFD tools we are using feature some pretty advanced techniques which aren’t commonly used by the teams, we want to back up the virtual simulations with a physical simulation,” he says.

An advantage of using the Sauber wind tunnel, which is available for commercial hire, is that the Swiss operation has a very good automatic rake system.

“The rake features an array of pitot tubes with yaw sensitivity, so they can measure the direction, pressure and the velocity of the flow, mainly the velocity components and the pressure,” adds Tombazis. “In that way we can make sure that what the CFD is predicting is correct.

“The simplification of the leading car’s aerodynamics also helps for wake performance because on the one hand the front car doesn’t have as many methods to control its wake. On the other hand the following car, not having all these little, very sensitive devices is less susceptible to disruption.”

Traditionally 100% scale cars are not used in a wind tunnel as their use was banned some years ago due to the huge cost of producing the model. Most teams have moved to using 60% models, but F1 and the FIA have opted to work with a 50% scale.

“We also chose to use a 50% model rather than a 60% model and we chose to run that model quite a long way forward in the wind tunnel, so this gave us the opportunity to best inspect the wake of the car,” Symonds explains.

“It takes up less room in the tunnel and therefore it allows us to look, in terms of car lengths, further behind. If you imagine you have a full size car in there, you could only look at a tenth of a car when it is behind, so 50% is a good compromise in that we can still get a good level of detail on the model but we still have distance behind. It is true that teams have tended to go more to 60% these days. There are advantages to that, in modelling, but modern manufacturing techniques, particularly additive manufacturing methods, allow you to make very accurate 50% models these days.”

You might be wondering why the research and development teams haven’t put a second car behind the front car to test the wake. Symonds says that is “not necessary”.

“We did do that in 2008, with the overtaking studies we did then for 2009, and for that, we had to go down to a quarter scale model which really is getting too small,” he explains. “That is what negates us doing it. Even in a big tunnel like Sauber’s, you could only really run one configuration with the cars really very close. What we’re trying to do is use CFD as our real simulation tool and this is just the correlation.”

What have been the results?

One of the chief targets of the 2021 rules is to see more overtaking. To do this, there is a push to find a way to allow the cars to follow each other more closely, which is why there has been so much research into reducing the wake. So what have months and months of CFD testing and now a series of runs in the wind tunnel revealed?

“That fundamentally the CFD was correct,” says Tombazis. “There have been no major surprises. So there is a 5-10% wake disruption, compared to the current levels of 50%, although it depends on the exact configuration you are testing and so on.”

Symonds is just as encouraged, going as far to say the results are “actually beyond what I thought we could achieve when we started the project. With the configurations we have got at the moment, the results are exceptional.”

What role have the teams played?

The FIA and Formula 1 are working hand in hand on the research and development to finalise the 2021 regulations in time for the October deadline – but that doesn’t mean they are excluding the sport’s teams. In fact, it’s quite the opposite. Teams have been invited to help with the gathering of data and the development process, with the FIA allowing them to do the testing outside the number of hours they are allocated for their current projects. Those who have the resource and capability to do that have done so. Those who don’t still get the information.

“The teams have also contributed across the board on the CFD side,” says Tombazis. “Normally teams have a limit in how much CFD they can do but we’ve periodically offered them the option to do some work outside the limit that contributes to certain topics related to 2021 rules. Quite a few teams have contributed and they have to then share the results with the FIA, with Formula 1 and with the other teams.”
Elements such as the sidepod areas and rear wing are expected to remain the same in the final iteration, but expect the front wing to evolve as development continues.