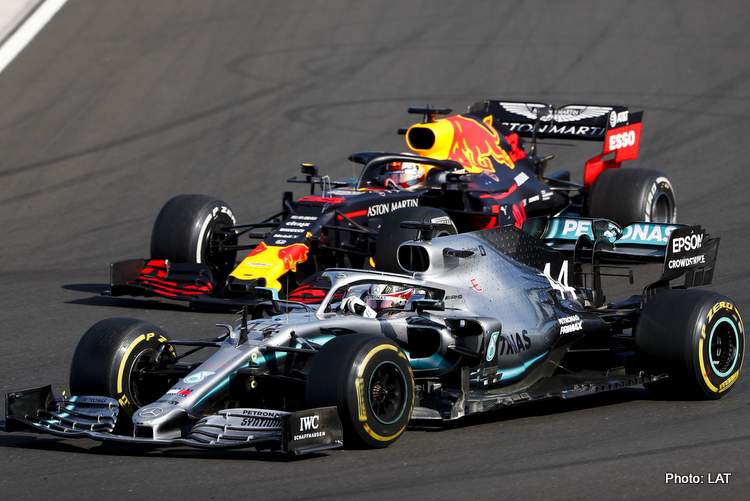 Lewis Hamilton chased Max Verstappen hard all day, in the end the Mercedes driver had enough to squeeze by the Red Bull to claim victory at a tense and intriguing Hungarian Grand Prix.

Both drivers questioned their respective teams’ strategy during a riveting race of cat-and-mouse at Hungaroring, the Dutchman ultimately the latter as the cat won this one, but only just.

Hamilton made a good start and tucked in behind Verstappen, keeping the blue car within a couple of seconds in what was an early stalemate in the lead battle.

For the first pitstops, Mercedes kept the #44 car out several laps longer than their rival and, although he lost track time in the spell, around the halfway mark he had caught up and a had a solid stab at the Red Bull but drifted wide in his attempt to snatch the lead in what turned out to be a thrilling duel between the sport’s hottest properties.

Another attack on those tyres did not transpire from Hamilton, instead, the Silver Arrows strategists made an inspired call, pitted their man for fresh mediums upon which, despite occasional moans from the cockpit, he was sent in to reel in Verstappen who was on very old Pirelli hards.

Hamilton dug deep, the best of him on display on occasions like these and he duly popped the fastest lap after fastest lap, finally on lap 67 his hard work paid off as he eased past Verstappen for the lead of the race, where he stayed to the end.

It will go down as one of the best and sweetest of his 81 victories in the top flight – his seventh in Hungary – and one that puts him only ten behind the all-time record of the legendary Michael Schumacher.

Hamilton said afterwards, “I feel tired, which is how it should be but I feel really grateful for the day and the team who continue to push me to the limits and take a chance on me. We’ve been together for seven years, but every win feels brand new.

“We had brake problems all weekend, and I was a bit worried, but we made the changes and I was actually doing a lot of lift and coast for half a lap, but I was just trying to save as much as I could.

“It was difficult to get by, the defence was great, and I didn’t know if I could catch that 19-second gap. I just kept my head down, and each lap was like a qualifying lap. I know if Niki [Lauda] was here today, he would take his hat off,” added the championship leader.

If his future is to be decided this summer, Valtteri Bottas will be a worried man as he had another race to forget only a week after crashing out of the German Grand Prix.

The Finn came off second best when he went wheel-to-wheel with his teammate on the opening lap and suffered a broken wing in the process. He continued for a few laps with the damage but then pitted for a new wing when it was clear he was a couple of seconds off the leader’s pace.

Thereafter he spent the afternoon playing catch-up, finishing a disappointing eighth when he would have fancied his chances of at least a podium before the lights went out a couple of hours earlier.

On the other hand, Verstappen was flawless and was voted Driver of the Day for his gritty effort to keep Hamilton behind. He managed a great start and when required matched his pursuer lap time for lap time but in the end, he ran out of rubber and was easy meat for his prey and second his reward.

Nevertheless, it was another stellar performance that will only enhance his shares as he and Red Bull ink a new deal to keep him in the Honda-powered fold.

Verstappen summed up, “We were just not fast enough, but I tried everything I could on those hard tyres to stay alive. Unfortunately, it wasn’t enough, but to finish second with the fastest lap, it was a good weekend overall.

“Of course, congratulations to Lewis for the win and he was pushing me very hard. I was just lacking a bit of grip I guess. We tried the one-stop, and they had the opportunity to do two, and that worked out well.”

While the top two stole the show, Ferrari were next best but way off the top pace and well under the radar as they circulated in no man’s land with Sebastian Vettel stealing third from Charles Leclerc late in the race. All in all it was a weekend to forget for the Reds.

Vettel said, “We had nothing to lose, so we stayed out very long in the first stint, and hoped that the soft would last in the end which they did. “I think they were the fastest tyres in the end, so we were able to close the gap. I had one opportunity which I took, so I’m happy to have some champagne now.

“It’s good to have a break as I feel we need to charge our batteries.  There will be tracks that are better for us, but we need to get stronger. We will see, but the tracks now do look better for us on paper. It will be a busy break for us, and I don’t think our minds can rest too much in the two weeks,” added Vettel.

They were nearly lapped by the top two, ending the race over a minute behind them when the chequered flag waved to end the race.

Carlos Sainz shone for McLaren, managing to keep Pierre Gasly at bay for most of the race. The Frenchman finished sixth but was again comprehensively outshone by his teammate, adding further question marks about his future with a team that is not known for patience with their drivers.

For Sainz it was another good result as the Spaniard gave another solid display, making a strong start and thereafter doing enough to end Best of the Rest in a very tight midfield. His teammate Lando Norris was ninth.

Veteran Kimi Raikkonen again showed his mettle in a race of attrition with seventh place for Alfa Romeo while his rookie teammate Giovinazzi was on another planet, ending 18th and second last of the finishers.

It was a bad weekend for Renault, they seem to continue slipping backwards and again were comprehensively outshone by McLaren, their customer team, as their drivers struggled with a sub-par package for Nico Hulkenberg (12th) and Daniel Ricciardo (14th) to toil with.

Biot Racing Points struggled to find the sweetspot, although Sergio Perez did finish 11th Lance Stroll never got going in a race in which 17th was his plight. The team were a disappointment on a weekend when much more was expected from them.

Special mention for George Russell who followed up his incredibly qualifying performance with an equally impressive race to finish 16th, at one stage as high as 13th on merit. A much-needed boost for his beleaguered Williams team.

As F1 heads for the summer break, Hamilton leads the F1 World Championship by 62 points from Bottas who is seven ahead of Verstappen.

At the start, Verstappen held his pole position advantage, getting away well to brush off pressure from both Mercedes drivers on the long run to Turn 1. Second-on-the grid Valtteri Bottas, though, had the poorest getaway of the three and in Turn 3 Hamilton muscled past his team-mate to claim P2.

As Bottas struggled to recover he was passed by Leclerc, with brief contact being made, and then, at the start of lap two, by the second Ferrari of Sebastian Vettel.

Having suffered front wing damage in his battle with Leclerc, Bottas pitted for a new wing and hard tyres, a move that dropped him to the back of the field.

Verstappen began to build a slender lead over Hamilton and by lap 10 the Dutchman had 2.3s in hand over the Briton. By lap 13, the top four of Verstappen, Hamilton, Leclerc and Vettel were well clear of the chasing pack, with fifth-placed Sainz 18 seconds behind Vettel and holding up a train that included teammate Norris in P6, Räikkönen and Gasly.

Verstappen made his first pit stop on lap 25 and with hard tyres onboard for the final stint, he rejoined in P2 behind Hamilton, and with the Briton reporting that his tyres were in good shape, Mercedes elected to leave the championship leader on track.

When Hamilton eventually pitted on lap 31, a four-second stop by Mercedes saw the Briton emerge over six seconds behind Verstappen, who once more took the lead.

The gap wouldn’t last, however. Armed with fresh hard tyres, Hamilton reduced the gap and on lap 39 Hamilton attacked. He went around the outside of the Dutchman into Turn 1 and though Verstappen defended well the Mercedes driver was able to pull alongside on the run to Turn 2. Verstappen held his line though and as they entered Turn 4, Hamilton was forced wide into the run-off area. He retreated to regroup and to plot another assault.

Behind them Leclerc still held third place ahead of Vettel, who made a late stop on lap 39 for soft tyres. Sainz was now fifth, while Gasly had jumped Räikkönen and Norris (who had a pit stop issue) and was back up to his starting position of sixth.

On lap 48 Mercedes gambled and Hamilton pitted for a set of medium tyres. The move left him 19s behind Verstappen and the race now came down to whether the Mercedes could close the gap over remaining laps.

With five laps to go Verstappen’s hard tyres were finished and as the pair crossed the line Hamilton edged into DRS range. It was only a matter of time and under DRS at the start of lap 67 the Mercedes driver powered past the Red Bull to claim the lead.

Verstappen immediately pitted for soft tyres and soon after posted the fastest lap of the race and he crossed the line in P2 17.7s behind Hamilton and almost 44s ahead of Vettel.

Fourth place went to the second Ferrari of Leclerc, while Sainz took a well-worked fifth place for McLaren. Pierre having recovered from his start, settled into sixth in his final stint and earned a solid eight points for the Team. Räikkönen was seventh for Alfa Romeo ahead of Bottas and the final two points places were taken by Lando Norris and Albon. 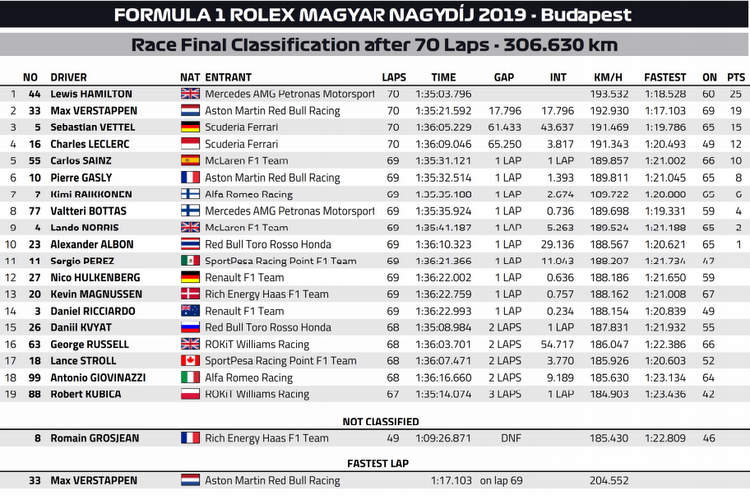 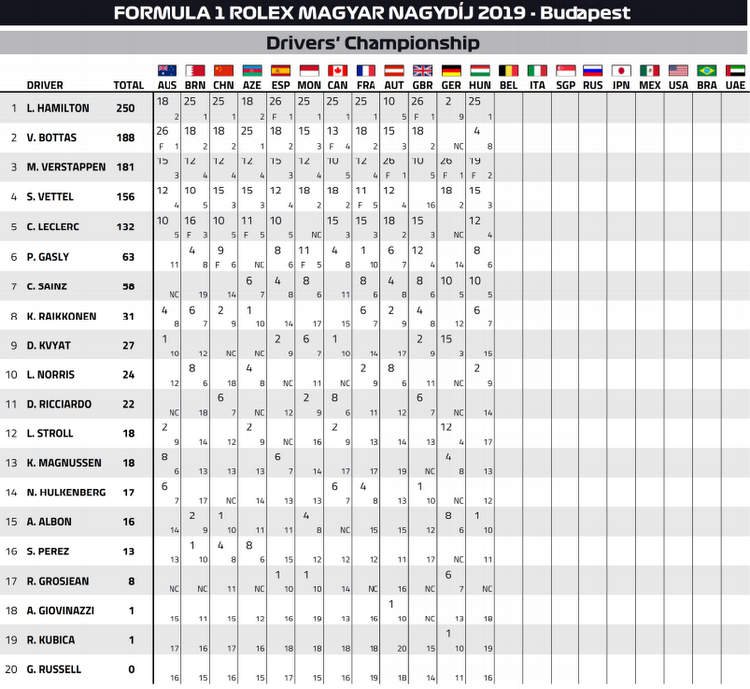 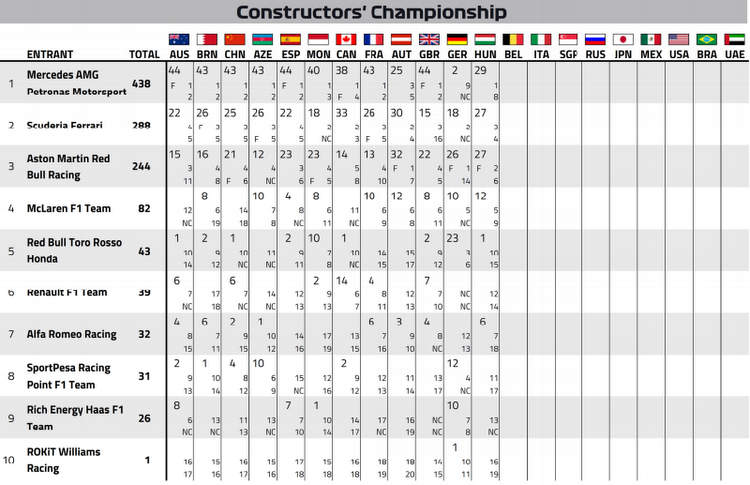 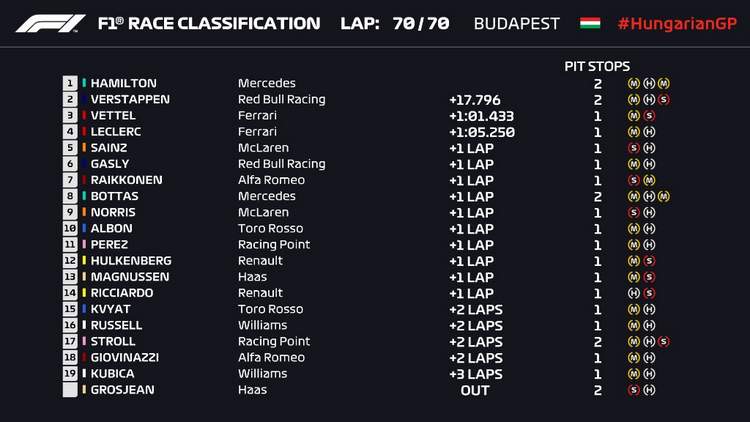 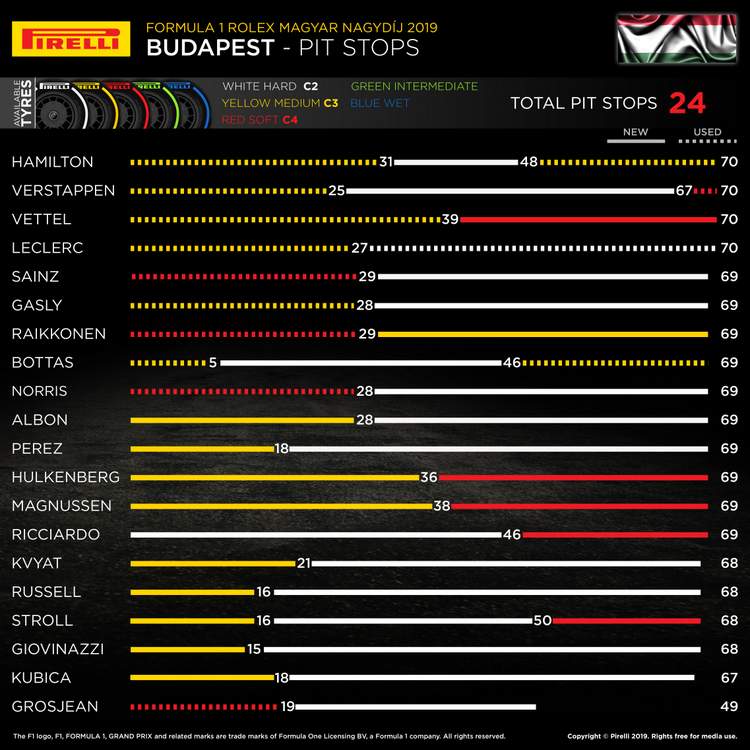 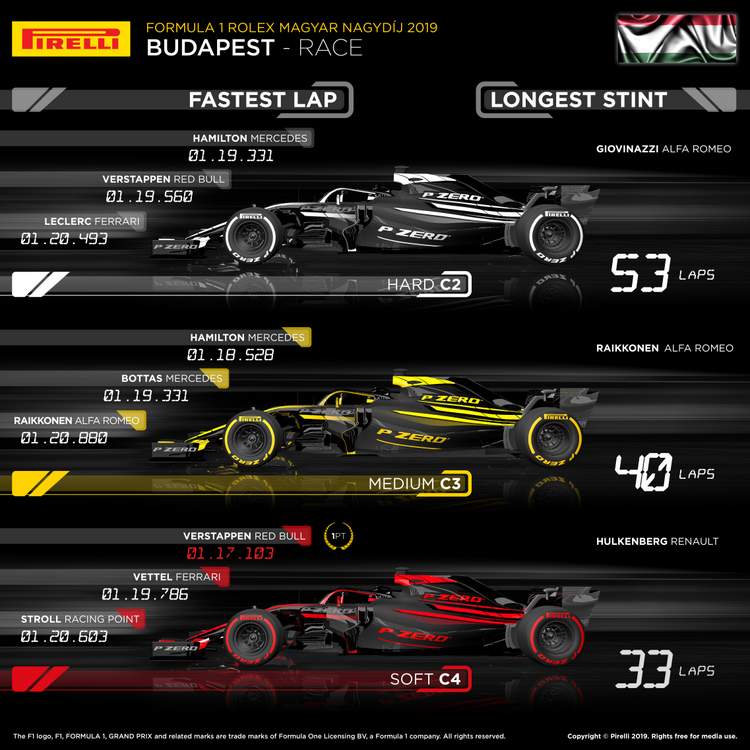