Red Bull: We haven’t quite found the perfect balance 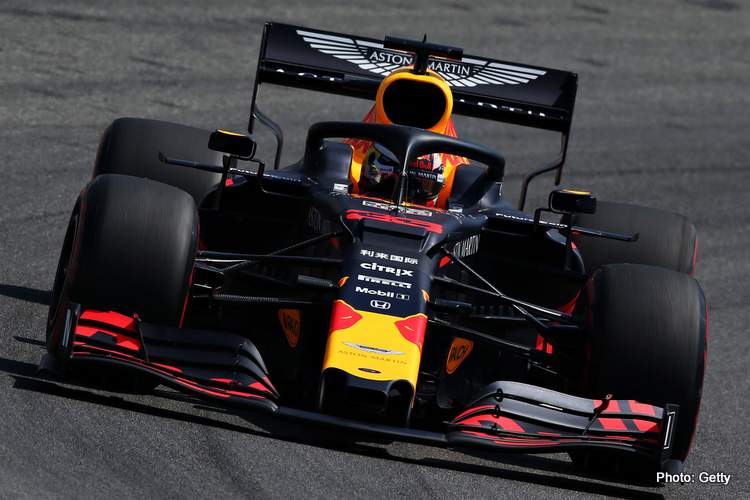 Red Bull report from day one of the German Grand Prix weekend, Round 11 of the 2019 Formula 1 World Championship, at Hockenheim.

The Bulls are back in Baden-Württemberg as the German Grand Prix gets underway, setting off the first weekend of a doubleheader that will take us to Hungary straight after, then into the summer break.

This time of year can be very pleasant at the Hockenheimring – but perhaps not so much for those in tents. The German Grand Prix can see the hottest temperatures of the season, or be submerged in a deluge, or have both on the same weekend.

With the later looking most likely to greet the Team on track, with Friday providing a scorcher and a weather forecast of rain showers increasing in likeliness as we near Sunday.

Free Practice One in Germany saw Max first onto track for the weekend, with a short delay early on in the session as Haas’ Kevin Magnussen brought out the red flag after a sensor issue. The session was soon back underway with Max leading the pack out yet again.

Friday afternoon’s Free Practice Two was set to be the hottest session of the weekend and saw the teams put in a number of qualifying and race simulation laps.

With 17 minutes left of the session Pierre lost control of the car and his RB15 was sent into the barrier hard on the final turn, bringing out a red flag, however the Frenchman was unhurt. The session resumed with nine minutes remaining.

“Today was ok. We haven’t quite found the perfect balance yet but we are also not too far behind. In FP2 I didn’t have a clean lap on the softest compound as I had to abort and around here it is really a one lap tyre. I ended up doing extra laps on the tyre and the peak of the grip was gone.

“We are a little bit behind Mercedes and Ferrari but with some fine-tuning it will be ok and I think we are better than the times from FP2 show. It’s always good to get plenty of running on a Friday, even if the conditions are going to change, as you can still get an understanding and find the right direction for the rest of the weekend. One thing I know for sure is that it’s very hot and I’ve been sweating a lot!”

“It was quite a tricky day today. We managed to get some decent laps during FP1 and the feeling with the car was good. We completed the normal tests and then in FP2, we had a couple of issues which meant we didn’t get a short run on soft tyres and that put us back in the classifications, but the feeling was still good.

“Unfortunately, towards the end of the session I lost the car exiting the final corner during a long run and hit the barrier. Fortunately I wasn’t using my race engine or gearbox, but more importantly I’m really sorry for the boys in the garage and I want to apologise to them as the repairs will make for a long night.

“Looking ahead to tomorrow, the conditions are going to be completely different so we need to learn from today and analyse all the tests we have done.”

Toyoharu Tanabe, Honda F1 Technical Director: “Due to the heatwave affecting Europe, with 37 degrees air temperature and the track at 50, these are the toughest conditions we have experienced this year.

“However, the next two days are expected to be significantly cooler, so from the PU side we have taken that change into consideration when planning our settings for qualifying and the race. Both teams ran a normal Friday programme but the drivers do not seem entirely satisfied, so we will now work with the teams to try and improve the package.

“As for Pierre’s crash, the PU in his car was scheduled for Friday use only, so it does not affect our plans for this weekend. But we will be checking it thoroughly to see if it can still be used at future races.”