Ferrari: This pole is for our fans 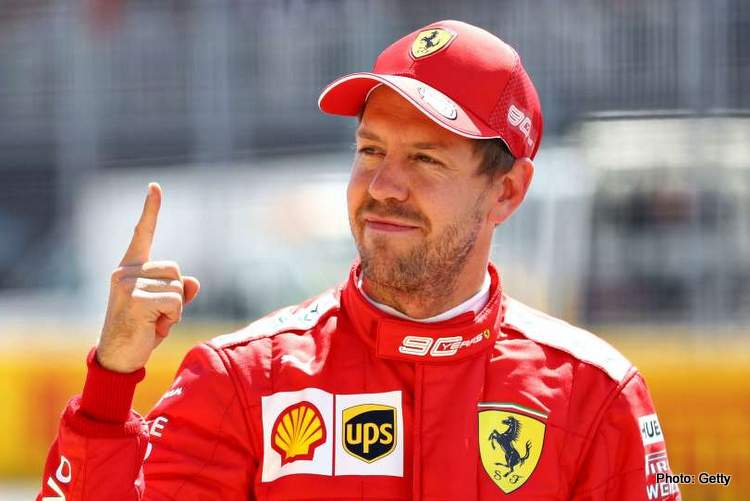 Sebastian Vettel will start the 50th Canadian Formula 1 Grand Prix from pole position, when the lights go out at 14.10 local time (20.10 CET.)

The German’s best lap was 206 thousandths faster than second-placed Lewis Hamilton, while Charles Leclerc was third in 1’10”920. This is Scuderia Ferrari’s second pole of the season, following on from Charles’ in Bahrain.

Q2. In Q2, the aim was to make the cut on the Medium tyres, so as to use them for the start of the race. Sebastian did it with two laps in 1’11”309 and 1’11”142. Charles made a mistake on his first run but soon posted a 1’11”205, which was enough to make it through to the final session, even though Q2 was red flagged after Kevin Magnussen hit the wall which meant no one could improve.

Q3. In the top ten shoot-out, both the SF90s used Soft tyres to get the most out of the car. Charles was the first of the two Ferrari men to set a time in 1’11”188, with Sebastian then doing a 1’10”681. On the final run with new tyres, Leclerc got down to a 1’10”920 while Sebastian excelled himself to deliver an amazing 1’10”240, to ensure the 56th pole of his career, his eleventh with Scuderia Ferrari, which puts him level with Rubens Barrichello on the list of Ferrari driver poles. For the Scuderia, this was pole number 221, coming almost 68 years after the first one, which came courtesy of José Froilàn Gonzàlez in the 1951 British Grand Prix.

Sebastian Vettel: “That was a good day for us and I’m really pleased for the team. The last couple of months haven’t been easy for us so it’s nice to get a result like today and it sends the right message to all the guys. We are flat out and the most important thing is we keep pushing.”

“There’s a lot of adrenaline going around in qualifying and when they came on the radio I was really delighted. It was quite tense in terms of concentration and obviously you try to put everything in that one lap or in those two attempts that you have.”

“Coming here, we knew that we would have better chances and we were able to confirm that. Our pace is stronger here and we are basically sure to avoid the soft tyre in the race. We’ll take it from there. Anything can happen tomorrow and we’ll race to find out, as simple as that.”

“We know our competitors are very quick, especially over the distance and we’ve seen this in all the races so far, but we’re starting ahead of them and hopefully we’ll stay there and fight as hard as we can. It is important that the chance was there today and we took it. But now we must confirm it tomorrow. So hopefully more singing!”

Charles Leclerc: “Today’s result is great for our team and congratulations to Seb for securing pole position. He was very quick today and just put everything together. He deserves it. For my part, I have to improve the way in which I anticipate the track evolution, so that I can set up the car to be on point for Q3.”

“I will analyse this and hopefully be stronger in this department at the next race. Starting from third place tomorrow is a great opportunity and it will be fun to be in the fight with our competitors. We will keep pushing and do our best to bring home a strong result.”

Mattia Binotto Team Principal: “This pole is for our fans, who support us and are always right behind us, even when things aren’t going so well.

“We are very pleased with today’s result. We have demonstrated that, on some tracks we can be competitive, given that here in Canada our performance has been good all weekend. I think that we are working well, even if the results have not reflected that fact. But the team has shown the right spirit and today’s result is a boost for everyone.”

“Sebastian put together a great lap. The potential was there and he produced it at the right moment. Charles also did a good job to take third on the grid. Tomorrow’s race will be long and very tough. We have to stay focussed. The temperatures are expected to rise and tyre degradation will be a key factor for everyone. But for now, we can enjoy today’s result!”