Ricciardo: Max is quicker than Seb 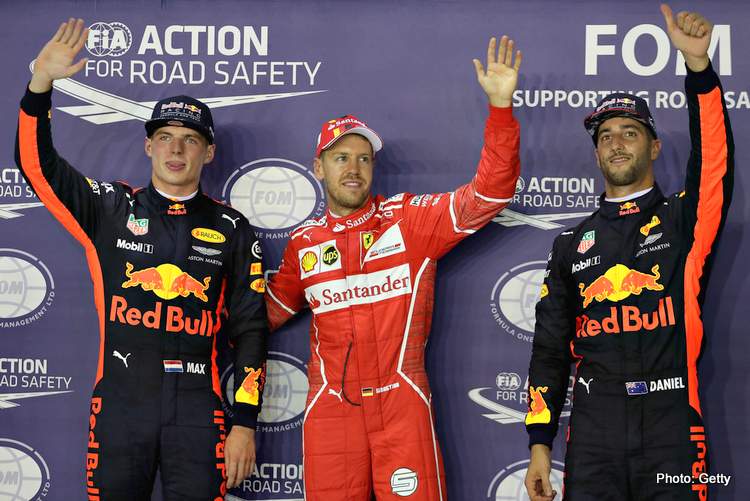 Renault driver Daniel Ricciardo believes Max Verstappen is a quicker driver than Sebastian Vettel who he says is more cerebral, and he should know as he was teammate to both drivers during his spell at Red Bull.

The Australian was groomed through the Red Bull young driver programme during his junior career, stepping up to Formula 1 with HRT with Red Bull backing, before being promoted to Toro Rosso and finally, in 2014, bumped up to the senior team alongside four-time F1 World Champion Vettel.

That year Ricciardo humbled the German and beat him in the championship, after which Vettel departed for Ferrari and Daniil Kvyat popped up next from the Red Bull driver factory. But he was out of his depth, no match for his teammate and after a season and a bit was replaced by Verstappen, who in turn was promoted from Toro Rosso.

History will always show that the young Dutchman won in his debut for the team and from that day on Ricciardo had his hands full, to the point that it would be fair to say that Verstappen had the edge, not only on track but also in the Red Bull garage.

Ricciardo’s days were numbered, he left the team and moved to Renault. But that’s another story…

Chatting to Nico Rosberg on ‘Beyond the Grid‘ vlog the world champ asked Ricciardo: “On single lap, straight out the box, So who is quicker Seb or Max?”

To which Ricciardo replied, “Max, yeah, yeah and that’s law. Yeah I won’t take anything away from Seb, he is not slow by any means but I would say on raw speed, probably more as well because Max is still young.”

“I think if he’s quick now he’s probably only going to get quicker, where Seb has been doing it that long, I think he’ll always improve as a driver but this probably less room to grow for Seb and there’s more for Max.

“Yeah, I would say that, if Seb’s listening: sorry Seb you’re still a badass, it’s alright!” he added with a trademark grin.

What Ricciardo did to Vettel in 2014 was done to him by Verstappen in the latter half of 2018. The Dutchman seized the higher ground on all fronts and at the same time, it was clear even from the outside, Red Bull had their chosen one and it was not Dan.

The shift towards Verstappen’s corner, at the ‘expense’ of Ricciardo, became obvious in how the team bosses dealt with the crashes and clashes between the pair. They kept it cordial and fun off-track, but on-track it was pretty vicious. Hungary (2017) and Baku (2018) were standout moments among several altercations between the two drivers.

Ricciardo recalled, “Max and I were battling and, as far as teammates go, we were battling too hard. I was surprised that the team didn’t kind of put a stop to it. I felt like I was giving enough room but a lot of the time you know he was kind of coming up into me and banging wheels…”

“I like tough racing, it’s fun and it’s cool and it keeps you going but I felt like at times, again because we were teammates…”

“I was likewise, in the team, addressing this and it’s maybe something I should have done differently, but I’ve never been one to come on the radio and complain too much and be like: Oh he hit me like what’s he doing? – because I’m a racer and I respect tough racing, but I felt like the team should have addressed it.”

Despite the rivalry, clearly, the Aussie has respect, even admiration, for Verstappen, “Max, one thing he was just quick out of the box as well, like FP1 first lap just go, like there wasn’t much of a feeling out process.”

“I think he drives on a lot of just instinct and he just goes. So yeah there wasn’t much of a building up and you know a new track kind of feeling it and getting the tyres in, so he’s still I guess technical but he’s probably got less…”

“I think Seb is much more of a sensitive driver, a lot more sensors in his body to kind of communicate with the car where Max drives probably more off instinct and raw talent,” added Ricciardo.

Ricciardo completed 158 grands prix as a Red Bull driver, including his time at HRT which was with their funding and delivered seven wins in the process. He is now at Renault.