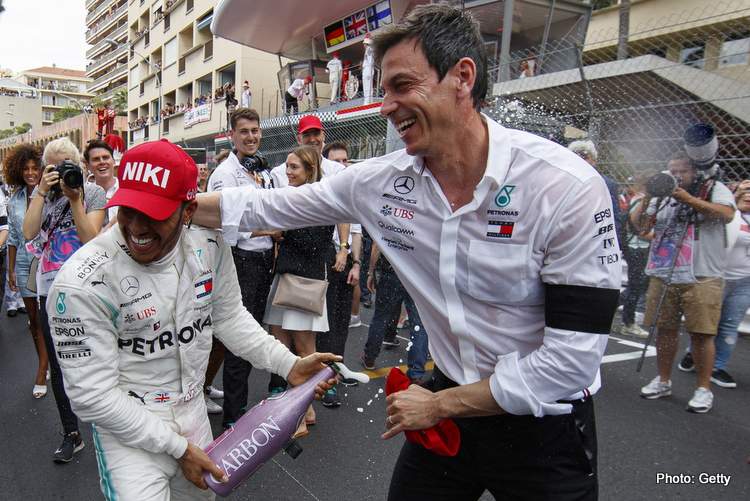 Without his “performance of a champion” drive on badly-worn and incorrectly-chosen medium compound tyres, in which he resisted near-incessant pressure from Max Verstappen’s Red Bull, the Silver Arrows’ season-opening winning streak may have been over.

“Obviously, it was the wrong call,” admitted Wolff, referring to the decision to fit Pirelli mediums instead of the hards during Hamilton’s pit-stop after only 10 laps. We thought the tyre would make it to the end.

“But, of course, it didn’t. He saved us. His driving saved us. It is something that we really need to analyse now. We calculated that the medium would make it, if we changed on lap 15 or 16, with the right management. It seemed a straightforward strategy.”

“It didn’t seem like a huge stretch, but then we realised 20 laps into it that some graining was appearing on the front left – and he started to complain. Under-steer resulted from the graining and it was clear it would be very, very difficult to make it to the end.”

“Everybody knew it would be a huge stretch and, probably 20 laps from the end, he had nought percent rubber left and with massive under-steer at slow speeds.”

“You could see that around the Loews hairpin – the car wouldn’t turn anymore… We were close to losing and if it was a normal track – like in Montreal – you lose that race.”

“At the end, the driver made the difference and won us the race. Lewis did an incredible job out there. It was a really hard-fought race with Max,” added Wolff.

Hamilton secured his third Monaco victory career 77th by resisting every attack from Verstappen, behind him on hard tyres, with one of the greatest stints of defensive racing ever seen on the unforgiving streets of the Mediterranean circuit.

His agitated radio exchanges with engineer Pete Bonnington punctuated the contest and allowed him relief from his concentration during what he later described as the hardest race of his life.

“It’s just difficult when you’re out on your own for so long and Bono can’t say anything,” said Hamilton. “Nothing he can say, or anyone can say, or do to help – it was all down to me to bring it home for the team and for Niki. That just felt immense.”

It was a measure of his achievement that Hamilton?s former team-mate and rival Nico Rosberg gave him unstinting praise.

“Even in qualifying, he wasn’t the fastest guy, but he got the pole,” said the 2016 champion. “Today, he was massively struggling out there, but Lewis just managed it in a world champion’s manner and even fended off that challenge from Max Verstappen in a proper way.”

Hamilton celebrated by leaping into the harbour swimming pool and later promised himself a rare glass of wine after extending his lead in the drivers’ championship to 17 points ahead of team-mate Valtteri Bottas.

The Finn finished third behind Sebastian Vettel of Ferrari after Verstappen was dropped to fourth with a five-second penalty for his pit-lane brush with Bottas after an unsafe release by Red Bull.