Ferrari: A race of mixed fortunes 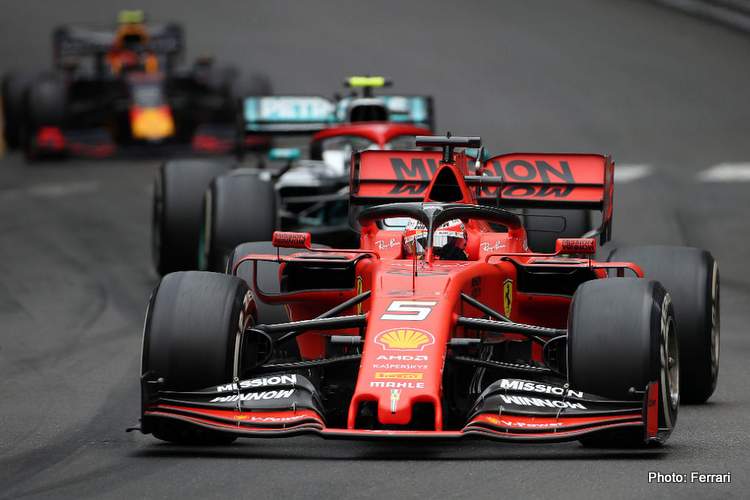 Sebastian Vettel finished second in the 66th Monaco Grand Prix, less than three seconds behind Lewis Hamilton, after driving a solid race during which he was always a front runner.

This was Scuderia Ferrari Mission Winnow’s fourth podium of the season. Charles Leclerc had an unlucky race, forced to retire after 16 laps, following a collision with Nico Hulkenberg.

Start. At the start, Sebastian got away cleanly, running behind Lewis Hamilton, Valtteri Bottas and Max Verstappen, maintaining fourth place. Charles had a strong start from 15th, immediately making up one place, setting off on his bid to move up the order. On the second lap at the hairpin, the Monegasque driver passed Lando Norris and closed on Romain Grosjean. Five laps later, he got alongside the Frenchman at Rascasse and then passed him.

At this point, Nico Hulkenberg was ahead of him. On lap 9, Charles tried a repeat of his Rascasse move but he hit the barrier and collided with the German, picking up a right rear tyre puncture. He had to complete a whole lap with the wheel dragging on the ground, thus damaging his floor.

He pitted for fresh tyres and got away again, but shortly afterwards he was called back in for one final attempt on Soft tyres and major set up changes to the front wing to try and balance the car that was lacking downforce following the incident. It was in vain, as the car was too badly damaged and it was deemed too dangerous to continue.

Safety Car. The lap he drove with the puncture left debris on the track and that brought out the Safety Car. The four leaders pitted and Sebastian took on Hard tyres, as did Bottas and Verstappen, these last two colliding in pit lane as they drove out.

The Finn picked up a puncture because of this and had to pit again. The Stewards declared that Verstappen had to take a five second penalty added to his final race time, for the unsafe release.

Restart. At the restart, Hamilton led from Verstappen and Sebastian, who was now a virtual second. The German thus played a waiting game, matching the pace of the two drivers in front of him, ready to make the most of any collision or mistake. But the positions remained the same to the flag, so that Sebastian made it to the second step of the podium.

Next race. Now the championship heads to Canada for the seventh round of the season, at the Gilles Villeneuve Circuit, on Sunday 9 June.

Sebastian Vettel: “It was a tough race today but, in the end, second is a great result and I am happy for the team that we got a podium finish on such an iconic track as Monaco. We were also able to benefit from mistakes of other people today, but that’s part of this game.”

“When I was following Lewis, who was struggling with his tyres, and Max chasing him very closely, I saw that they touched and for a brief moment I even kidded myself I might win it!”

“We know we have a lot of work to do so today we are happy, but not entirely happy. On the other side, it’s a pity for Charles. Not the best weekend for him.”

Charles Leclerc: “Our performance was there but unfortunately the result wasn’t. I gave it my all today, knowing that I had to do something different and take a lot of risks to fight my way forward after starting in 15th position.”

“I enjoyed the beginning of the race and it was going quite well. While overtaking Nico on lap 9, I clipped the rear on the wall and our cars touched which damaged my rear tyre and the floor. We tried to continue racing on a new set of tyres but we were just lacking too much downforce after the incident and had to retire.”

“A difficult weekend overall, but I am already fully focused on the next race in Canada and will do my best to bounce back there.”

Mattia Binotto Team Principal: “Given that he started fourth, Seb’s second place is definitely a good result on a track where it’s well known that overtaking is very difficult. He ran at a good pace throughout the race and did an excellent job of managing the tyres, which wasn’t an easy task today.”

“Charles had a strong start, knowing that he’d have to fight his way up the order after his race was compromised by what happened in yesterday’s qualifying. It was a good getaway, but being aggressive always carries a risk.”

“He pulled off some nice passing moves, but on his last one, maybe he tried just a bit too hard. But that’s the right attitude. He proved that he is not the sort to ever give up or surrender. So it was a race of mixed fortunes and now we are already preparing for Canada.”