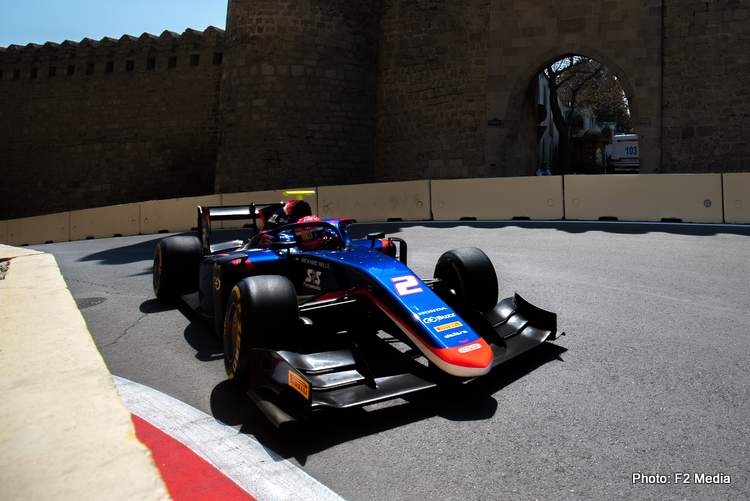 The Japanese driver sealed top spot with a time of 1:54.555, to finish ahead of ART Grand Prix’s Nyck De Vries and UNI-Virtuosi’s Luca Ghiotto.

The heat had risen to 19 degrees Celsius as the driver’s hit the Baku City Circuit on Supersoft Pirelli tyres. However, the cars had barely touched the track when the session was red flagged after Sean Gelael stopped between Turns 7 and 8.

His the front right brake disk caught on fire but was quickly extinguished by the marshals. The Indonesian managed to return to the pitlane and stepped out of his car for the remainder of the session.

There were less than 20 minutes left on the clock at the re-start. MP Motorsport’s Jordan King had driven competitively in Free Practice and was the first to top the times, setting the benchmark at 1:57.213.

De Vries knew he had the beating of King and leapfrogged the Brit with better pace in sectors 2 and 3, but by this point, Ghiotto already had his eye on a quicker lap. The current Championship leader had taken the plaudits in Free Practice and dove passed Juan Manuel Correa on his way to stealing provisional pole by 0.022s with 10 minutes remaining.

Following this, the cars returned to the pits for a brief assessment and tyre change. When they returned onto the Baku City Circuit, less than six minutes remained to shake up the order.

The fight was on with two minutes on the clock as De Vries fired himself into contention with a faster sector 1. Quicker sectors 2 and 3 times followed as De Vries took pole and eyed his eighth front row start, but Matsushita and Ghiotto were on final laps as well.

Matsushita had seen first place stolen from him in the dying embers of Free Practice and was out to ensure the same fate didn’t bear its head again.

It was the Japenese driver who came out on top, dipping under 1m55s just before the flag. Ghiotto was unable to break the same barrier and his time of 1:55.037 was only good enough for third, behind De Vries.

With plenty of twists and turns already in Baku and the Supersofts proving quick, the drivers and teams will now look ahead to tomorrow’s Feature Race, at 12pm local time. 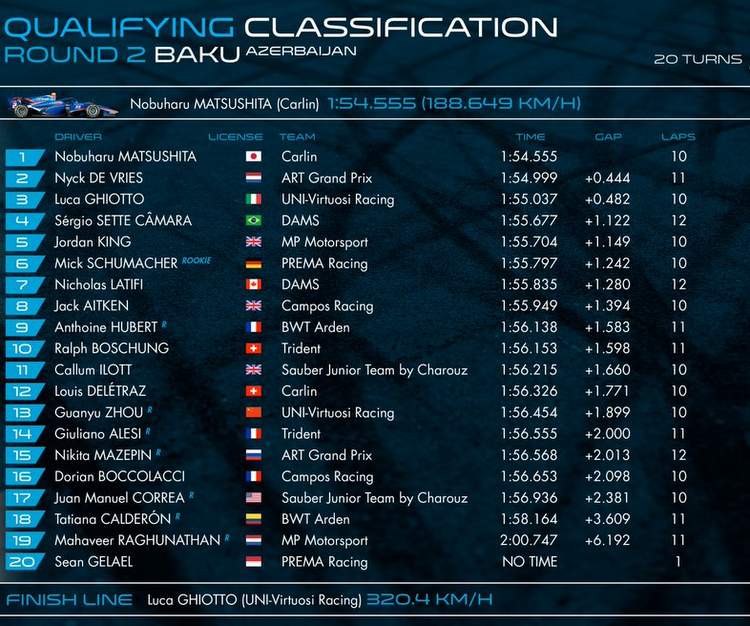