Vasseur: Giovinazzi is struggling but he will recover 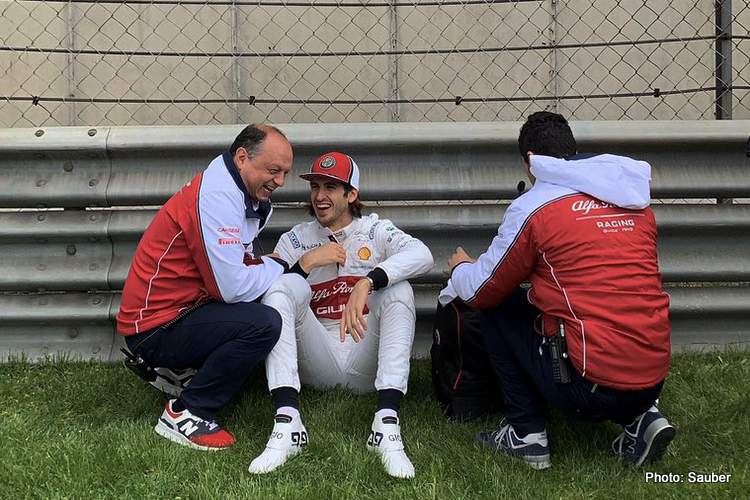 Antonio Giovinazzi was once upon a time the ‘next big thing’ as far as Ferrari were concerned, the youngster was being groomed for Formula 1 by the legendary team but, now in the big leagues, the 25-year-old is not delivering in his first full season at the pinnacle of the sport.

In 2017 for the season opener in Australia, Giovinazzi was drafted at very short notice to substitute for injured Pascal Wehrlein at Sauber. In Melbourne, the Italian was thrust into the deep end with only FP3 mileage he did well to finish the race 12th, albeit two laps behind the winner.

Nevertheless, an impressive, if not spectacular, debut considering the circumstances.

But things went pear-shaped in China that year (again subbing for Wehrlein) when he crashed heavily in qualifying and the next day also binned it in the race, on both occasions, the big prangs were visible from the pitlane and, needless to say, his shares plummeted.

However, Ferrari kept the faith and this year Giovinazzi is a full-time F1 driver alongside Kimi Raikkonen.

The former Sauber team have produced a handy car for their drivers, with Raikkonen in the thick of the midfield battle with 12 points to his credit after three rounds. On the other hand, Giovinazzi has a zero to his name at this stage.

With regards to his rookie driver, Alfa Romeo boss Frederic Vasseur explained to Motorlat, “It’s frustrating for everyone because Antonio showed from the beginning that he has the talent. He was very fast in Melbourne Q1, faster than Kimi or more or less the same.”

“In Bahrain, the pace was there, but in qualifying he made a small mistake at the end of the lap, but he was also a little faster than Kimi. He’s just struggling to put everything together. It’s a shame but I think he will recover.”

“If we look at last year, the start of the season was also difficult for our drivers, but we gave them a lot of support and they were able to improve during the season. We have to do the same with Antonio.”

Indeed Charles Leclerc, one of Giovinazzi’s Ferrari Driver Academy (FDA) colleagues, also scored no points in his first three races of last season but then stunned the F1 world with a superb sixth place in Baku.

In retrospect, that performance is what kickstarted his path to a drive with the Scuderia.

Vasseur also pointed to the benefits of teaming up the rookie with experienced veteran Raikkonen, “We have the advantage of having Kimi as a leader who not only provides a benchmark pace but also provides insight on the way to manage a race weekend.”

“For Antonio, the talent is there, so it will be useful. It is also important for us and important for Antonio’s mind but I am convinced he will do it.”

Had Giovinazzi not made such a hash of his second F1 race in China, he might well have been Sebastian Vettel’s teammate today, instead it is 21-year-old Leclerc who landed the most coveted seat in sport.

Asked to compare the two drivers entrusted to him by Ferrari, Vasseur said, “It’s too early to tell and, you know, that the next step is always the hardest. It’s the same for Charles, going from the back to the best of the rest was one thing and now passing the best of the rest to win races is another story.”

“Antonio can do well and I hope he can put everything together very soon. I have high hopes and it’s not the first time in my life that I am in this situation. I’m not at all worried but I do not want to make any comparison with Charles.”

Vasseur also had a dig at the fickle nature of F1, “I had a question last year during the press conference in Bahrain, after the race, someone asked me if 2018 was probably too early for Charles.”

“Then, after 10 races, it was: OK, he needs to go to Ferrari and he will be the next world champion. One day a man is doing a good job and will be world champion, then he makes a mistake and it’s: he will never make it!”

“He has very good reviews and is working very well in the team, even in difficult times. For example, the [qualifying] mistake was 200% our fault and nothing to do with Antonio. But that’s life,” added Vasseur.