Haas: We made some progress 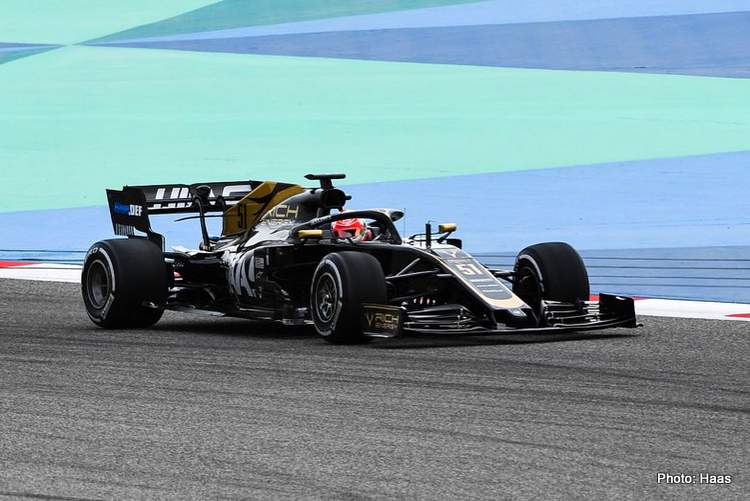 With 48 laps recorded, and a fastest time of 1:31.209 – set on the C3 yellow rubber, Fittipaldi ended the session 12th overall from the 16 drivers participating.

Grosjean returned in the afternoon with an extensive workload planned to maximize the favorable conditions. Cycling through a variety of used C3’s for the majority of his track time – recording close to 70 laps in the process.

Grosjean ended the day switching to a fresh set of the softer, grippier C4 red-walled tires. A best lap of 1:30.903 followed, placing Grosjean 10th fastest at the checkered flag with a total of 87 laps.

George Russell, driving for Mercedes, set the day’s quickest time (1:29.029) while Alex Albon from Toro Rosso ran the most laps (143)

Next up is Round 3 of the 2019 FIA Formula One World Championship – the Chinese Grand Prix April 14 in Shanghai.

Pietro Fittipaldi: “I was really happy with how the morning went. I’m a lot more comfortable being back in the car now, as both in Abu Dhabi last season, and in Barcelona earlier this year, it was a new experience driving that car. I was able to carry some consistency this time around as I was familiar with the VF-19 having driven it in Spain, and again briefly yesterday.”

“I felt both comfortable and confident in the car, it was good. We went through our whole run plan and I worked well with my engineer. We made some progress, and we were competitive, which I’m happy about.”

Romain Grosjean: “It’s been a good afternoon. We’ve gone through a lot of test items, obviously trying to understand our pace over the weekend. I think we made some progress. We’ve now got a lot of data to look at to prepare for China. Generally, I think it was a very good afternoon for us.”