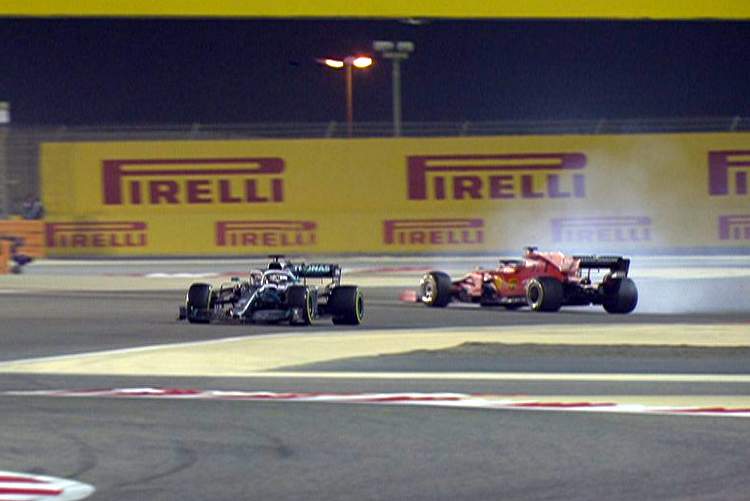 Sebastian Vettel made an unforced error during the Bahrain Grand Prix which turned a possible second place into fifth place when the chequered flag waved to end an exciting race under the floodlights of Sakhir.

Not long after the halfway mark while in second, Vettel seemed to lose power after enjoying the upper hand during the first half of the race, which allowed Hamilton to close the gap.

The pair slugged it out for position, side-by-side for long stretches with the Mercedes finally edging ahead and the Ferrari spinning while chasing the silver car.

From then on it was damage limitation for the four-time F1 World Champion who took the blame for the error when he said over the radio, “Sorry guys, my mistake. I got surprised and lost the rear. Really sorry.”

“And not sure about what I saw on TV, but I’m really sorry for Charles, please tell him that he drove an excellent race, very strong and he should have won it.”

Ferrari chief Mattia Binotto consoled the team’s star driver, “Hi Seb, next race will be the best one. Don’t worry, you did your best, you did a fantastic race. These things may happen”

Vettel: “Thank you Mattia, grazie alla squadra. Abbiamo una macchina per il campionato. Mi dispiace per oggi. Ma ringrazio per lo spirito.” [Translation: Thanks to the team. We have a car for the championship. I’m sorry about today, but thank you for the spirit.]

Later the German reflected on another race which the Scuderia should have won but were trounced by Mercedes, “It’s difficult, we all struggled at various points and I really struggled at the beginning maybe on the medium tyre.

“But overall it wasn’t the race I wanted to have, then on top I had a mistake with the spin so not a good evening. It’s a disappointing day, starting at the front and not finishing there is not what we wanted,” added Vettel.

Big Question: What’s up with Seb and the inability to keep it straight when racing wheel-to-wheel?