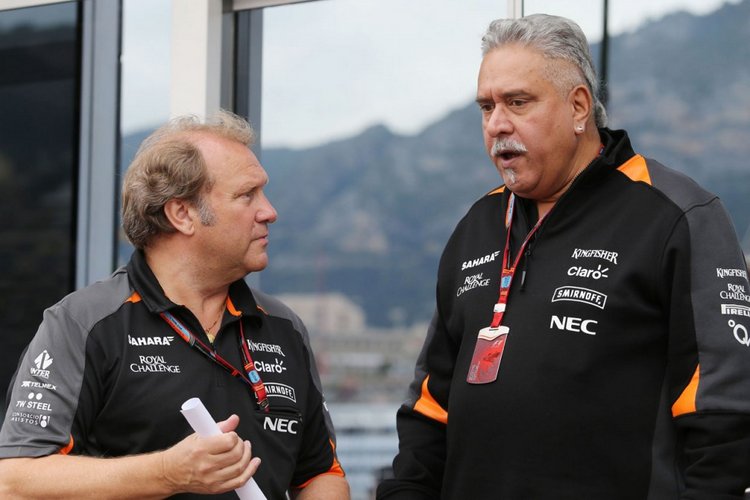 Force India mechanics were preparing their cars for the Belgian Grand Prix on Thursday despite lingering uncertainty about the Formula One team’s eligibility to race after a change of ownership.

The pink and white trucks and hospitality unit had no Force India branding, with the official team name appearing only over the garage on signs put up by Spa circuit organisers.

Former deputy principal Bob Fernley (pictured above with Vijay Mallya)who effectively ran the team with chief operating officer Otmar Szafnauer, meanwhile confirmed to Reuters that he had left following a takeover by a consortium led by Canadian billionaire Lawrence Stroll.

That departure was expected, with Fernley operating as right-hand man to financially and legally troubled former co-owner Mallya.

Mechanics were working as normal, however, and the Silverstone-based outfit issued a media schedule for driver interviews.

Force India went into administration at the end of July with a rescue deal announced on Aug. 7.

Szafnauer, who remains in position, said then that the team’s future was secure with Stroll — father of Williams driver Lance — injecting substantial funding.

However, doubts about Force India being able to race at Spa, the first grand prix since the August break, emerged on Wednesday with reports of legal complications.

The racefans.net website reported that while Stroll had purchased the team’s physical assets, including the cars, ownership of the entry that confers the right to race had yet to be transferred.

Any name change would also require the agreement of other teams.

A Force India spokesman was unable to comment on the reports but other sources were optimistic a solution would be found in time to race.

A statement from the governing International Automobile Federation (FIA) was expected on Thursday, with the track action not starting until Friday.

Perez triggered the administration by taking legal action to secure payment of more than $4 million he said he was owed as part of sponsorship deals brought to the team.

Mercedes, who were owed some 13 million euros (£11.6 million), and leading sponsor BWT were also involved.

The team currently sit sixth in the constructors’ standings on 59 points after 12 rounds of a 21-race season.

Force India’s problems have been well-documented for some time, with Mallya fighting an attempt by India to extradite him from Britain to face charges of fraud, which he denies.

A group of Indian banks are seeking to recover more than $1 billion (£784 million) of loans granted to Mallya’s now-defunct Kingfisher Airlines.