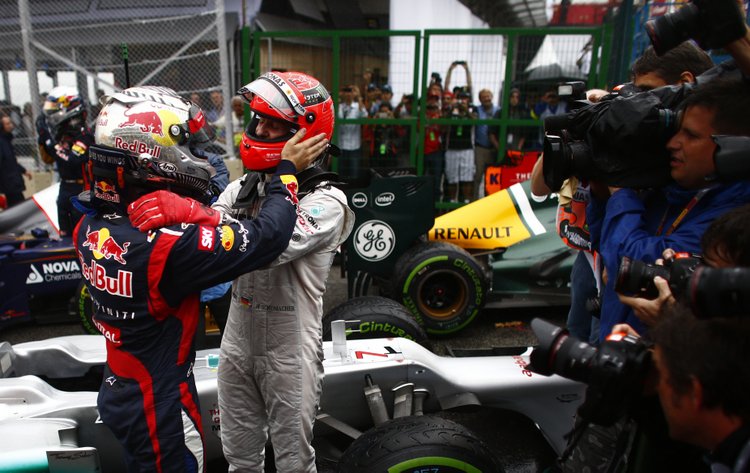 Sebastian Vettel is a modern Formula 1 icon, recognisable and respected some even considering him the successor to Michael Schumacher, but the mantle lies awkwardly around his neck as this was never the younger German’s intention.

Although Vettel was too young to race against Schumacher in the latter’s Ferrari heyday, they were rivals when the seven times Formula world champion returned with Mercedes from 2010 to 2012 – in those years Vettel won three world titles.

In an interview with the official F1 website, Vettel said, “Many times people confuse the fact I joined Ferrari as me trying to do something similar to Michael.”

“If we can go anywhere near what Michael achieved that would be a great success but times have changed and what lies behind us is not really what should drive us in the future.”

A trait he does share with Schumacher is his ability to galvanise a team around him. He did it at Red Bull and was rewarded with 39 grand prix wins and four titles.

Now, at Ferrari, he has a team that is all geared to make him world champion again in a similar manner to Schumacher’s two decades ago.

Vettel’s record of 51 wins, 106 podiums, 55 pole positions and 34 fastest laps is up there with the legends of the sport.

But according to the 31-year-old German, he was not sure he had a future in motor racing let alone Formula 1, “When I was growing up and coming through different categories, it wasn’t until very late that I was convinced I could have a successful career in racing”

“You just focus on what you’re doing at the time. Every single step. The target was to reach F1, but still, even when I reached F1, I wasn’t convinced.”

“After a couple of years and winning some races, then you realise you have a career. But before that, I never really liked to call it a career.”

As he heads for his 211th Grand Prix start in Belgium this weekend, Vettel revealed, “Your approach has to change on the fly so clearly you know what you have to do after so many years and so many races, but still every race and every day is different so you have to react on the fly and trust your preparation but also trust your instincts.

Heading to daunting Spa-Francorchamps for Round 13 of the championship, Vettel should be leading the championship and not be trailing by 24 points if not for his headline-grabbing gaffe with victory in sight at his home German Grand Prix a month ago.

“I don’t need pity,” he admitted. “It was my fault. When everything goes well you are cheered, and if you make mistakes you are criticised. So I don’t care much about what people say. I have to be at peace with myself.”

Truth is, and he knows in his heart, it might be the race that cost him a fifth title, but if anyone can turn around the 24 points deficit to championship leader Lewis Hamilton in the nine remaining races it has to be Vettel and Ferrari.