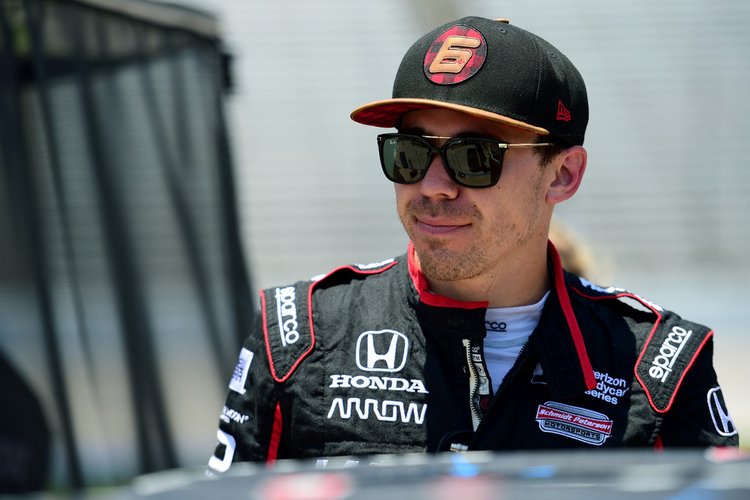 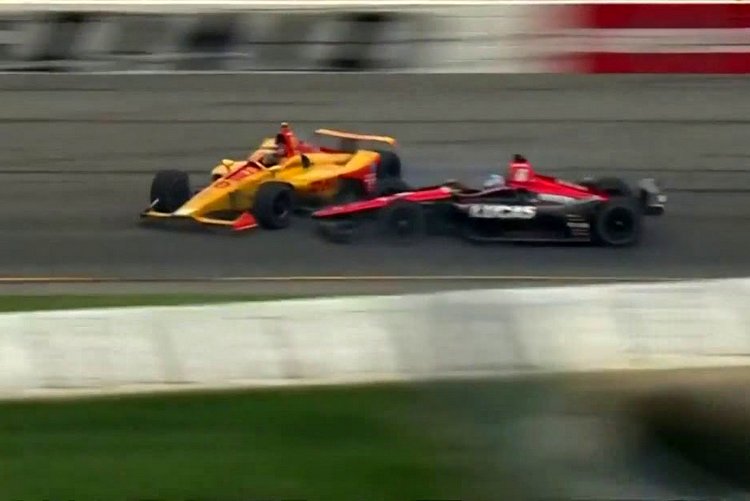 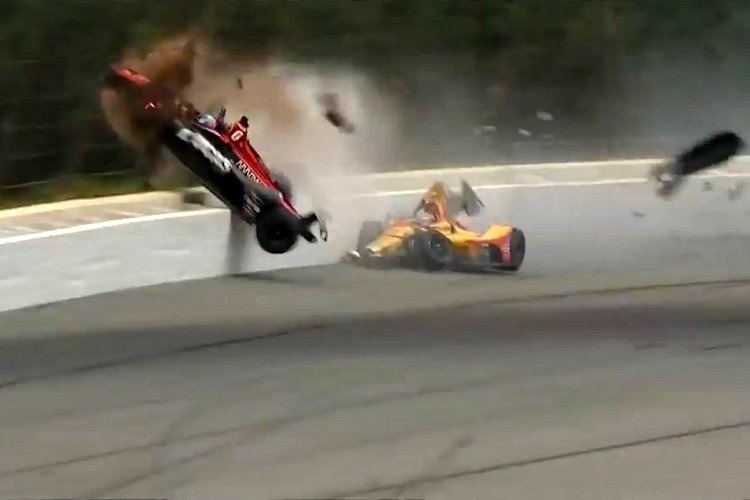 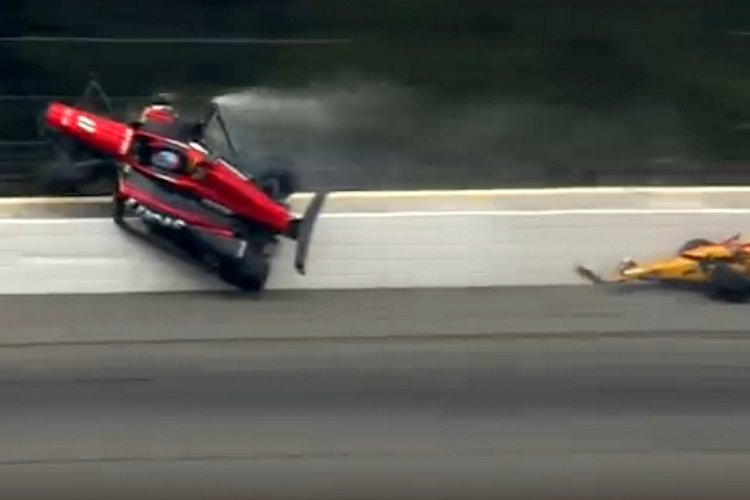 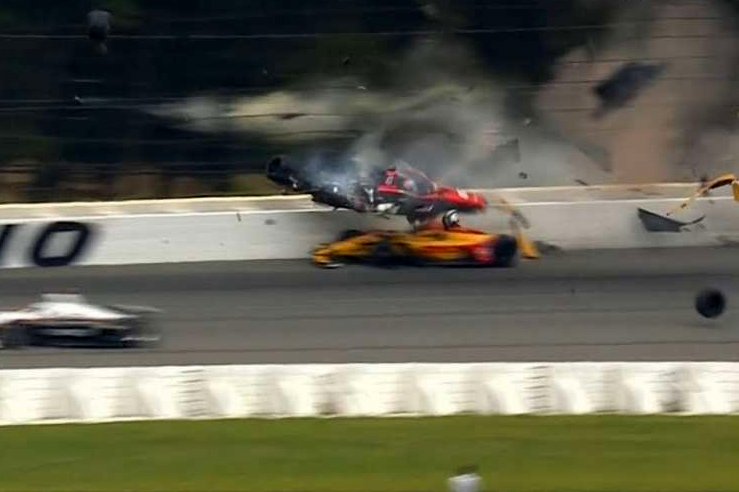 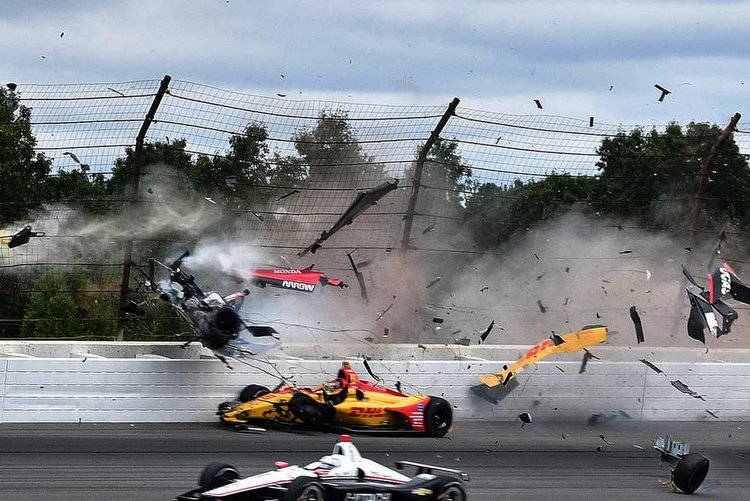 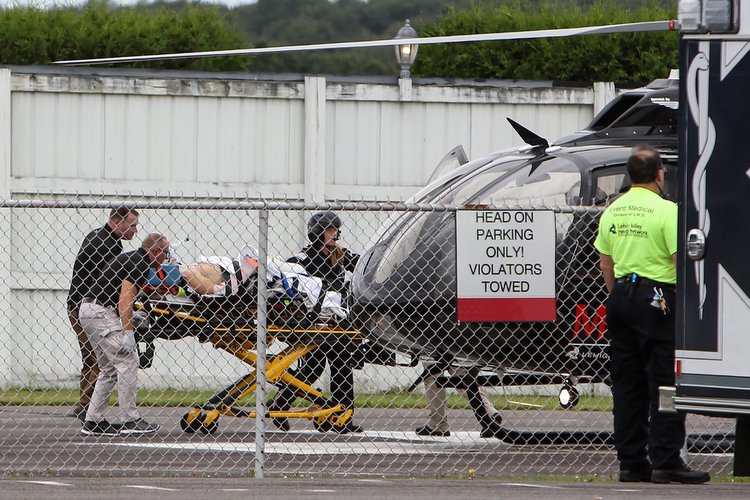 IndyCar driver Robert Wickens has been treated for injuries to his lower extremities, right arm and spine following a huge accident early in a race at Pocono

IndyCar said the Canadian sustained a pulmonary contusion Sunday and will undergo an MRI and probable surgery at Lehigh Valley Hospital Cedar Crest in Allentown.

The official Indycar website reports that the melee began on the seventh lap in Turn 2 when the front right tire of Wickens’ No. 6 Lucas Oil SPM Honda bumped the left rear tire of Ryan Hunter-Reay’s No. 28 DHL Honda.

Both spun toward the wall, with Wickens’ car riding over the front of Hunter-Reay’s and vaulting into the catch fence. The car pin-wheeled repeatedly in midair before flying back over Hunter-Reay’s car and coming to rest upright on the track surface.

“It’s unfortunate for the start of the race,” Hunter-Reay said upon exiting the medical center, “but I just hope Robert’s all right. I was lucky to get out of that one.”

“He had a run out of Turn 1,” Hunter-Reay said of Wickens, “came up along the side of me, but I was in the draft of (Will) Power in front of me, so I started pulling ahead. Once we got to (Turn) 2, he was at my (left rear) corner at best.

“I even gave room. I left a lane; left a half of a lane, if not more. I was pretty shocked I got hit in the back. That is neither here nor there right now. We’re just thinking about Robert.”

The fencing was shredded and Wickens’ car was reduced to just the tub, which came to a rest on the track along an interior wall.

Medical workers calmly attended to Wickens, who was taken to an ambulance before he was transported to the helicopter. The impact of the wreck tore out a large section of fencing that needed almost two hours to repair.

Wickens’ teammate at Schmidt Peterson Motorsports, James Hinchcliffe, who was trailing the incident, spun amid the smoke and contacted Takuma Sato’s No. 30 Mi-Jack/Panasonic Honda. Hinchcliffe’s No. 5 Arrow Electronics SPM Honda was then hit by rookie Pietro Fittipaldi’s No. 19 Paysafe Dale Coyne Racing Honda. All five cars involved were out of the race at that point.

Hinchcliffe and Wickens have been friends since childhood, when they raced go-karts together in Canada. Once released from the infield medical center, Hinchcliffe hurriedly exited the track to go to the hospital to visit Wickens.

“Not the race day we were hoping for,” Hinchcliffe said. “I saw the accident happening in front of me. (Zach) Veach started sliding up, I tried to slow down and just kind of lost it in the fray. As I was going backwards, I think Pietro (Fittipaldi) had nowhere to go and came into me. Other than that, there was a bunch of stuff going on, I’m not sure exactly what happened.

“I took my hands off the wheel when I went backwards, and I think some piece of debris came in as I was holding them (my hands) in, kind of just smacked the top of them so I took of bit of beating, but nothing is broken, just some swelling and some cuts. We’ll rest it up and be fine.

“Obviously, I’m just hoping Robbie’s all right. Never good to see a car go up (into the fence) like that, but I know he is in good hands. Hopefully, we’ll see him back in the car soon.”

Alexander Rossi won the race and said it was “tough to celebrate” with Wickens in the hospital.

In 2015 at Pocono, Justin Wilson died from a head injury when a piece of debris from a crashed car bounced off the track and hit his helmet.

Hunter-Reay, James Hinchcliffe, Pietro Fittipaldi and Takuma Sato were among the drivers collected in Sunday’s wreck. Hinchcliffe seemed to be in pain, grabbing his wrists as he slowly left his car. Hinchcliffe was cleared and released from the medical center. He declined to comment to reporters out of respect for Wickens.

The race was delayed nearly two hours and only eight laps in the 500-mile race had been completed because of Wickens’ crash and another accident right before green. Graham Rahal got into the back of Spencer Pigot before the race even got to green. Pigot spun and hit the wall.

“We can only hope one thing, that Robbie, Hinch and everyone involved is ok,” Rahal tweeted during the delay. “These are the dangers we face, but we always hate to see it. The start can be debated for years, but doesn’t matter right now, focus on the well-being of our friends and competitors.”

Pocono Raceway president Ben May said about 80 feet of fence and a few posts were damaged in the wreck. Bourdais raised concerns about the quality of the repairs and condition of the fence before he got back in the car.

“It may not be the prettiest job but it’s going to be safe,” May said.

Hinchcliffe is a teammate of Wickens on the all-Canadian Schmidt Peterson Motorsports. The two raced each other as youngsters in Toronto and Hinchcliffe, runner-up on ABC’s “Dancing With The Stars” in 2017, helped lure Wickens to IndyCar this season after a successful career in Europe.

The crash was a grim reminder how drivers in open-wheel racing put their lives on the line.

Hinchcliffe survived his own life-threatening injury when a broken part from his car pierced an artery during a 2015 crash at Indianapolis Motor Speedway. Hinchcliffe would have bled to death if not for the medical team holding the artery together as it raced him from the track directly to a hospital.

A year earlier, Hinchcliffe suffered a concussion when he was hit in the helmet by a piece of debris on the road course at Indianapolis.

Wickens had reeled off five straight top-five finishes and matched a career-best second in the last race at Mid-Ohio.

Fittipaldi had just returned from a lengthy layoff because of two broken legs suffered in Europe. Team owner Dale Coyne said Fittipaldi had a sore ankle and did not believe it was broken again.