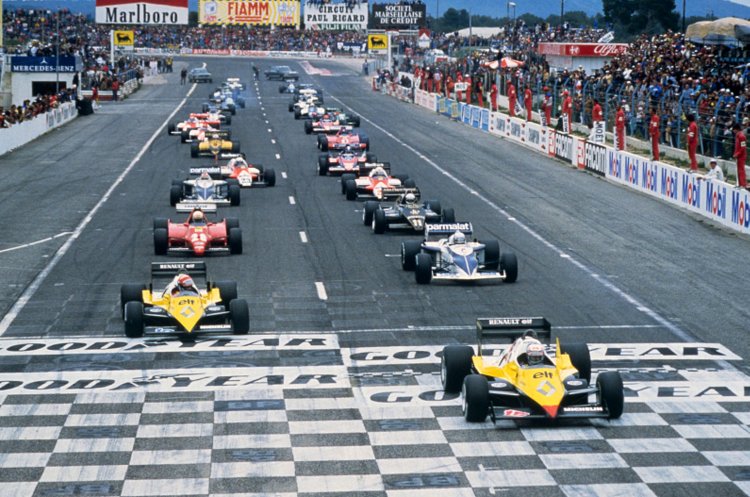 After a decade of absence, the French Grand Prix is back on the calendar – Round 8 of the 2016 Formula 1 World Championship – marking the return of a country with a storied past in the history of motorsports.

The oldest ever Grand Prix was run on 26 June 1906 under the auspices of the Automobile Club de France in Le Mans, with a starting field of 32 cars.

Since the advent of the FIA Formula 1 World Championship in 1950, the French Grand Prix has been held on 58 occasions of which 14 were held at Paul Ricard in Le Castellet.

Here is a timeline of French achievements at the French Grand Prix:

Aldo Gordini, Amédée’s son, raced in only one Formula 1 Grand Prix in France on the Reims-Gueux circuit. He was in 17th place on the grid and retired after 27 laps when his Simca-Gordini’s engine failed.

1954 – First French driver on the podium

Robert Manzon from Marseille took third place on the Reims circuit at the wheel of a Ferrari 625 entered by the Rosier team behind Juan Manuel Fangio and Karl Kling’s Mercedes-Benz W196s.

1969 – First pole position and victory by a French car

Jackie Stewart set pole position on the Charade circuit in a Matra and went on to win the race from his team-mate, Jean-Pierre Beltoise. They were both at the wheel of the Ford Cosworth-engined MS80.

François Cevert scored his first podium finish in Formula 1 on the Paul Ricard circuit in his fifth grand prix when he saw the chequered flag in second place behind Jackie Stewart, his team leader at Tyrrell. This French Grand Prix was Marseille native Max Jean’s first (and last) who was an unclassified finisher in his March.

Patrick Depailler raced in his first grand prix on the Charade circuit for the Tyrrell team. He qualified 16th and was an unclassified finisher five laps behind the winner.

Frenchman Jean-Pierre Jabouille made his Formula 1 debut in the French Grand Prix at Paul Ricard. He was entered in the under-powered Iso and failed to qualify.

Renault scored premiers at home in the French Grand Prix on the Dijon-Prénois circuit. Its RS10s powered by a twin-turbo V6 engine locked out the front row, and Jean-Pierre Jabouille scored his first victory followed by René Arnoux who clinched his first podium finish. It was the first-ever win by a French single-seater (chassis and engine) which, in addition, was on Michelin tyres with fuel and oils supplied by Elf.

In 1981 Frenchman Alain Prost was driving for the Renault Elf team after beginning his F1 career the previous season at McLaren. He scored his first podium finish in Argentina and went on to clinch his first victory in the French Grand Prix on the Dijon-Prenois circuit.

The two Renault RE30Bs locked out the front row on the Paul Ricard circuit with René Arnoux in front of Alain Prost. They finished the race in that order in front of the two Ferraris driven by their fellow-countrymen, Didier Pironi and Patrick Tambay. There was a French triple on the podium and Frenchmen in the first four places in the race – a chapter in the history of French motor sport written on home turf!

Jean Alesi took part in his first grand prix on the Paul Ricard circuit with Tyrrell. He was 16th on the grid and drove a stunning race to finish fourth. Eric Bernard from the Martigues region also made his F1 debut in this grand prix. He qualified 15th and finished 11th at the wheel of a Lola. This race saw Olivier Grouillard, 6th in a Ligier, score his one and only point in F1.

The normally-aspirated V10 Renault locked out the podium on the Magny-Cours circuit with German Michael Schumacher (Benetton) winning from British driver Damon Hill and David Coulthard from Scotland (Williams). A year later, again at Magny-Cours, the French engine-building company racked a quadruple finish with two Williams, Damon Hill and Jacques Villeneuve, in front of the Benettons driven by Jean Alesi and Gerhard Berger.

The French Grand Prix was the first of all the grands prix to celebrate its centenary. Long before the creation of the world championship in 1950 the Automobile Club de France had organised the very first grand prix for motor cars in the history of motor sport called the ACF Grand Prix, which was held at Le Mans on a closed circuit measuring 103,16 km!

Circuit Paul Ricard will host the French Grand Prix comeback with a trio of local heroes on the grid: Romain Grsojean (Haas), Esteban Ocon (Force India) and Pierre Gasly (Toro Rosso). Renault have a works F1 team on home soil for the first time in over a decade while currently supplying Red Bull and McLaren.