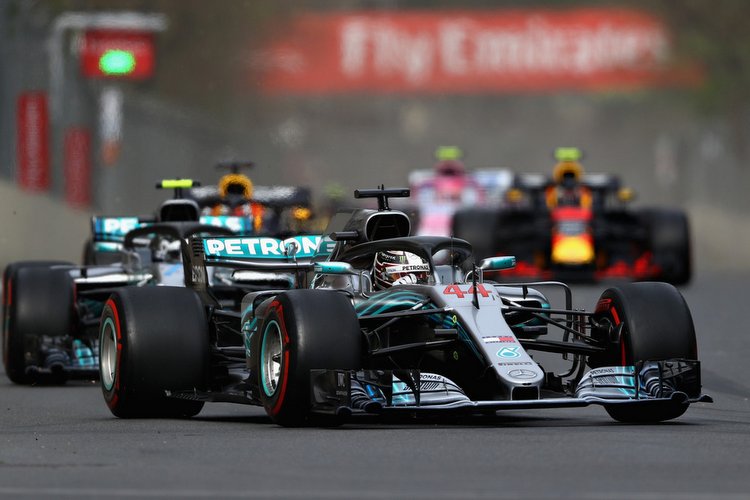 Lewis Hamilton won an incident-packed Azerbaijan Grand Prix, to open his victory account in 2018 and take the lead in the championship after surviving a comedy of errors that led to an unlikely victory in Baku, his first at the venue.

Sebastian Vettel led for much of the race, but was stuck in second behind Hamilton’s Mercedes teammate Valtteri Bottas when a crash between the two Red Bulls brought out the safety car.

On the restart, Vettel lunged for the lead but could not keep his car on the racing line at the exit of the next corner and instead lost places. Soon afterward, Bottas’ right-rear tire picked up a puncture, ending his race and elevating Hamilton to first.

“It was a real struggle today so to come out with the win I’m extremely grateful. Straight away after the car after the interviews I went to see Valtteri straight away. That’s why I was late to the podium.”

Ferrari’s Kimi Raikkonen claimed second place after having dropped to 14th following an early collision with Esteban Ocon, which ended the Force India driver’s race on the spot. His teammate Sergio Perez held off Vettel for third to claim Force India’s first podium since 2016.

Raikkonen told reporters, “I was inside and I think Ocon didn’t see me, it’s pretty difficult sometimes. he just turned in and I was there. It wasn’t ideal the start for me. It was a difficult race after that, I tried to come back.”

“At certain moments I felt good but in others I struggled to keep the tyres warm enough. I just played the long game and expecting issues. It paid off but it wasn’t very easy,” added the veteran Finn.

Perez added, “Today I think I did the best two laps of my whole career. The last two laps, with Sebastian behind, with cold tyres. It was so difficult. I was on the superosft tyres and I had to keep a very strong rhythm and try and keep close to Raikkonen so Sebastian didn’t get close enough. I’m speechless.”

The two Red Bulls of Max Verstappen and Daniel Ricciardo battled all race for fourth place. After several dramatic near-misses, they collided on lap 40 when Ricciardo ran into the back of Verstappen under braking at the first corner, sending them both off the track.

Bottas had been left in the lead when first Hamilton, then Vettel, stopped for fresh tires. He would have had to stop soon but for the Red Bull crash, which allowed Bottas to pit and keep the lead.

Romain Grosjean crashed under the safety car on lap 42, sliding into the wall while weaving in an attempt to heat up his tires. That delayed the restart, and when it came Vettel charged down the inside of Bottas but couldn’t slow enough to make the corner and went onto a runoff area.

After a start in cool, windy conditions, the safety car was out almost immediately on lap 1 as several cars collided in the middle of the pack.

Sergei Sirotkin ran into the back of Perez, causing contact between several other cars. That in turn left Sirotkin out of the race and Fernando Alonso limping back to the pits with two punctures.

The drama continued at the next turn, where Ferrari’s Kimi Raikkonen’s aggressive lunge at Force India’s Esteban Ocon plunged Ocon into the wall and out of the race. Raikkonen needed a new nose and dropped to 14th.

Renault’s Carlos Sainz and Nico Hulkenberg briefly stormed past both Red Bulls into fourth and fifth, but Sainz lost his spot when he pitted, while Hulkenberg’s race ended with a slide into the wall on lap 11.

The 2018 Azerbaijan Grand Prix was full of drama right from the start. Pole position man Vettel held his advantage when the lights went out, taking the lead ahead of Hamilton, Bottas and the Red Bulls of Ricciardo and Verstappen.

Behind them there was drama as Räikkönen and Force India’s Ocon collided in Turn 1. The impact pushed the French driver into the barriers and out of the race, but the Finn was able to make his way back to the pits for a new front wing and a set of soft tyres.

More incidents were to follow soon after, when Williams’ Sirotkin tagged the front right wheel of  Alonso’s McLaren. The Russian driver was forced to retire, but the Spaniard was able to limp back to the pits, though by the time he had reached the McLaren pit box he had shed both right side tyres. He too took a new front wing and soft tyres. With debris strewn across the track, the Safety Car was deployed.

When the action resumed, Vettel again held his advantage, demonstrably backing the field up to shorten the run to Turn 1. He quickly opened up a gap to the Mercedes and it was further back in the battle for fourth to sixth that the big battles began to happen.

Verstappen passed team-mate Ricciardo but in doing so Renault’s Sainz pounced and managed to slot between the two Red Bulls. The Spaniard then began to exert pressure on the Dutch driver and quickly made a decisive move past the Red Bull.

Behind them, Ricciardo was also a target for Renault.  Hulkenberg swiftly passed the Australian and then got past Verstappen as both Red Bull drivers complained of battery charging problems.

Hulkenberg’s stay in fifth place was brief, however, as on lap 11 he made an error in Turn 4. The German lost the back end of his Renault and the rear left of hit the wall. He drove straight down the escape road at Turn 5 and retired.

The Red Bull drivers appeared to now be recovering from their woes and as Verstappen began to push back towards Sainz, the Spaniard opted to pit, shedding his ultrasoft starting tyres for a set of softs.

At the front, Vettel was busy constructing a comfort zone back to Hamilton, and by lap 20 the Ferrari driver had built a four second cushion over the Mercedes man. Hamilton was in turn six seconds clear of team-mate Bottas.

Vettel’s advantage was stretched on lap 21 when Hamilton suffered a huge lock-up into Turn 1, flat-spotting both front tyres. He dropped three seconds to Vettel and immediately headed for the pit lane were he took on a set of soft tyres. He rejoined in P3.

The race then settled until Vettel, with a 4.8s lead over Bottas and 23.6s in hand over Hamilton, made his pit stop at the end of lap 30, taking on soft tyres. And when they crossed the line next, the German found himself 11.7s behind new leader Bottas (who needed to make a pit stop) and 7.9s ahead of Hamilton who was going to the end on older soft tyres.

Behind them, the Red Bulls, who had been duelling fiercely throughout the race, traded positions once more. Fourth-placed Verstappen complained of waning grip from his ageing supersoft tyres and Ricciardo, spotting the opportunity, pounced at Turn 1, using a good two from his team-mate to overtake around the outside. The Australian did well to keep his car out of the wall on exit as he locked up. It was all in vain, however, as when they pair pitted the Dutchman jumped his team-mate and re-took fourth place.

Ricciardo was urged by his engineer to “get it all done again” but in doing the Red Bulls set the pattern for the end of the race.

Ricciardo tried to pass his team-mate into Turn 1. The interplay between the cars was hard to judge, as Verstappen moved marginally right and then more decisively defended to his left, but the result was that Ricciardo slammed into back of Verstappen’s car and both crashed out of the race.

The safety car was deployed, but as it dictated the pace, sixth-placed Grosjean lost control as he weaved to keep heat in his tyres and he hit the wall.

The medical car was sent on track, the safety car stayed out and it took a number of laps before the Frenchman’s Haas was lifted off track.

Racing finally resumed on lap 48, after all of the leading drivers had pitted for ultrasoft tyres, and Vettel desperately tried to get past Bottas. The German locked up though and went wide, allowing Hamilton and Räikkönen to get past.

The race took and even more dramatic turn later in the lap as Bottas suddenly suffered a punctured rear left, caused by debris, that dropped him out of the race. Further back Vettel was struggling with his tyres and he was passed by Pérez.

And that was how the podium shaped up, with Hamilton taking a somewhat fortunate 63rd career victory ahead of Räikkönen and Perez. Vettel was left with fourth place ahead of Sainz, while Sauber’s Leclerc collected his first F1 points with sixth place.

Alonso brought his damaged McLaren home in seventh place ahead of Williams’ Stroll, the second McLaren of Vandoorne and the final point, for 10th place, went to Toro Rosso’s Hartley. 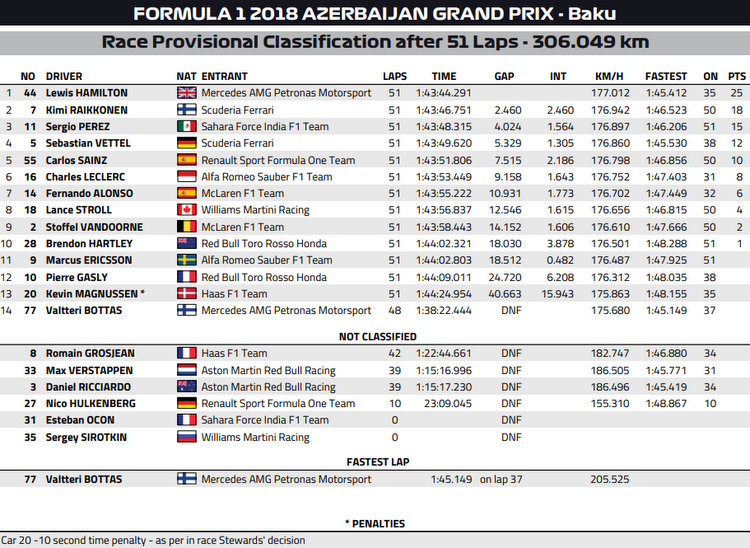 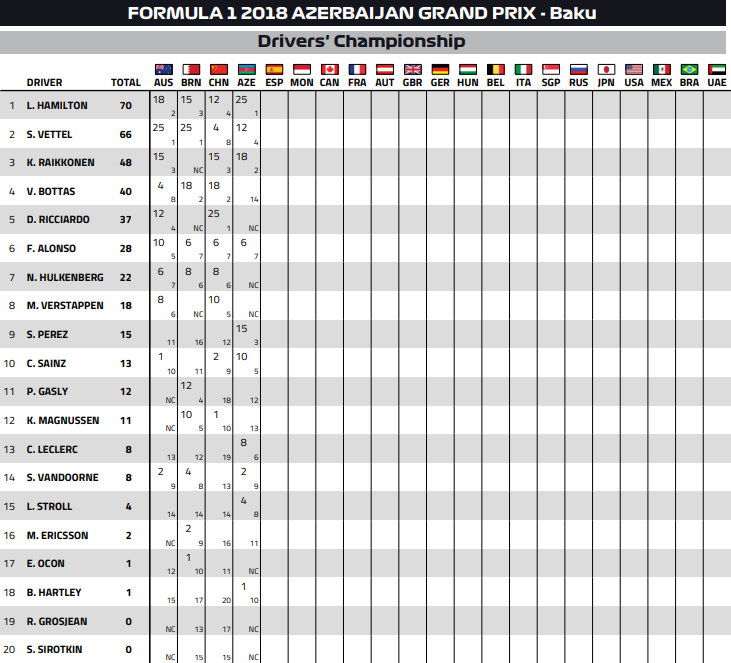 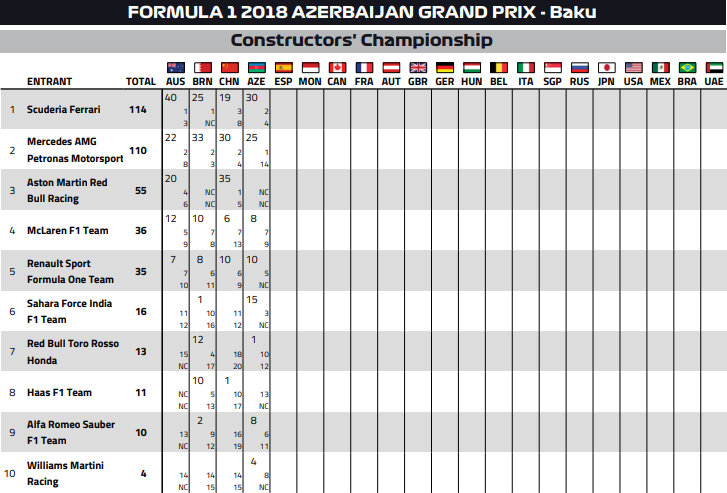 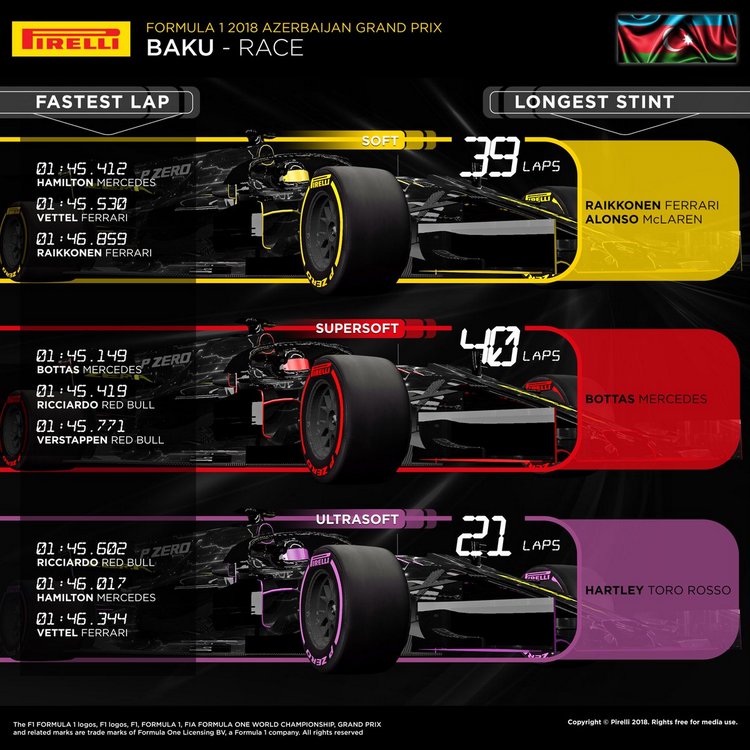 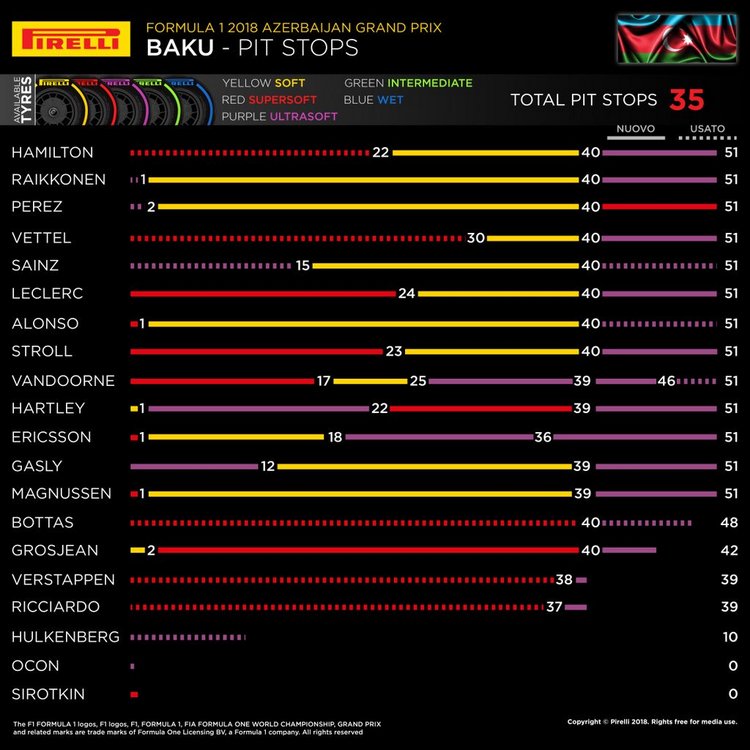