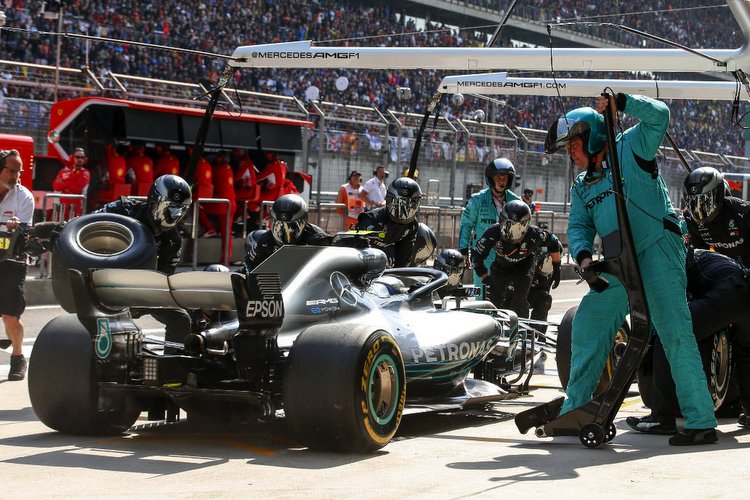 Formula 1 Chief Technical Officer Pat Symonds has pinpointed shortcomings that he believes have hampered Mercedes so far this season, suggesting that the world champion team is feeling the pressure as their once almighty engine advantage has been eradicated by their archrivals, Ferrari.

The Silver Arrows have yet to win a race this season and have been out-paced by the Reds during qualifying in Bahrain and China, suggesting that the performance gap has been reduced if not eliminated during the winter off-season.

In his review of the first three races, ahead of round four in Azerbaijan, Symonds said of Mercedes, “They’re still strong and still very, very capable of winning the title this year but perhaps more than Ferrari.”

“They are going to have races where they don’t get their tyres into the right working range and therefore they will not be as competitive.”

“Strategically, they’ve also had troubles. I won’t call them wrong, but I would say some imperfect strategy calls. I think that’s because there may have been imperfect calls before but with such a performance advantage you don’t really see them.”

“If you look back at the recent history of Mercedes, one thing that they’ve never quite got on top of is tyre management. We saw it a lot in the pre-hybrid era when they didn’t have the engine advantage they enjoy now.”

“If they didn’t get their tyre quite right, they didn’t have great races. I think things were masked from 2014 to 2016, simply because they had this big power advantage.”

“Then, last year we started to hear the car being called a ‘diva’. What’s that about?”

“In my mind, the difference in performance you get from one weekend to the next is not really explainable in aerodynamics or vehicle dynamics or anything like that. ”

“With an aero/chassis package, getting your set up just right might mean you’re hoping to pick up a tenth or so from Friday to Saturday qualifying. But when you get a big shift, when suddenly you’re not competitive, it has to be down to tyres,” ventured the former Renault and Williams technical boss.

Big Question: Have Mercedes become complacent thanks to their previous power advantage?