Ricciardo: Being close to the podium is encouraging 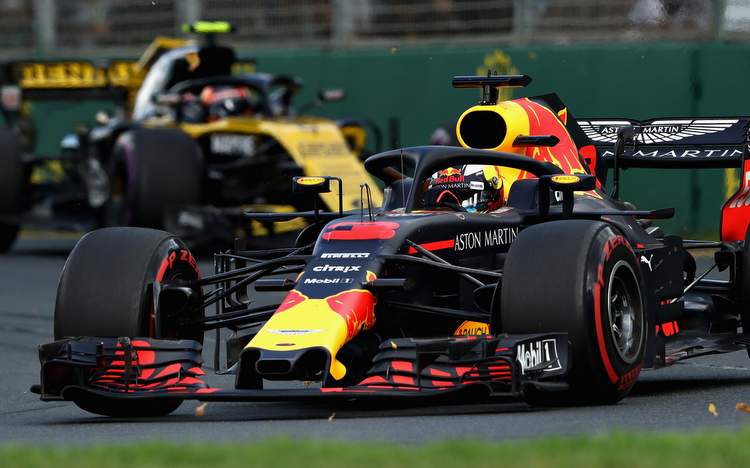 The Red Bull driver qualified fifth but was furious at stewards after they slapped him with a three-place grid penalty for a minor infringement during Friday practice that forced him back to eighth for the start.

He did well to battle past Nico Hulkenberg’s Renault early on and was soon up to sixth after teammate Max Verstappen had a 360-degree spin.

Botched tyre changes for both Haas cars saw them retire in quick succession, helping Ricciardo up to fourth but Ferrari’s Raikkonen proved too hard to dislodge, leaving the Australian frustrated again.

Ricciardo told reporters, “I think probably the most frustrating thing was if it was a lonely fourth I would have said: Alright, that’s the best we can do, but the pace we had (was good).”

“With a few laps to go I tried (to pass Raikkonen) and we were fast. So that was a good thing, but also a frustrating thing because if we started further up the grid I think it could have been a different story.”

“There were a couple of times I had a look at Turn 3 but Kimi was wise to that and could see what I was planning. Towards the end, I applied more pressure on him but he was able to up the pace as well,” explained Ricciardo who set the fastest lap during his pursuit of the Ferrari late in the race.

The result was Ricciardo’s second fourth-place finish at Albert Park after his 2016 effort. He also finished runner-up behind Nico Rosberg in the 2014 race, his first for Red Bull, but on that day was disqualified for a technical breach that was no fault of his own.

“I’m happy with the way I drove and we had a very fast race car. It’s not often I sit behind someone for most of the race but it’s a tight track and one of the more tricky ones for passing.”

“I think we’re pretty close with Ferrari and our race pace is strong, which I thought would be the case, so we just need to get a few more tenths out of Qualifying and then we should be looking good.”

“Being so close to the podium and getting fastest lap is definitely an encouraging way to start the season. I want to thank all the fans for coming out and supporting us today and now it’s definitely time to go and put my feet up for a couple of days after a busy week!” added Ricciardo.