Bottas: We approach the race with fighting spirit 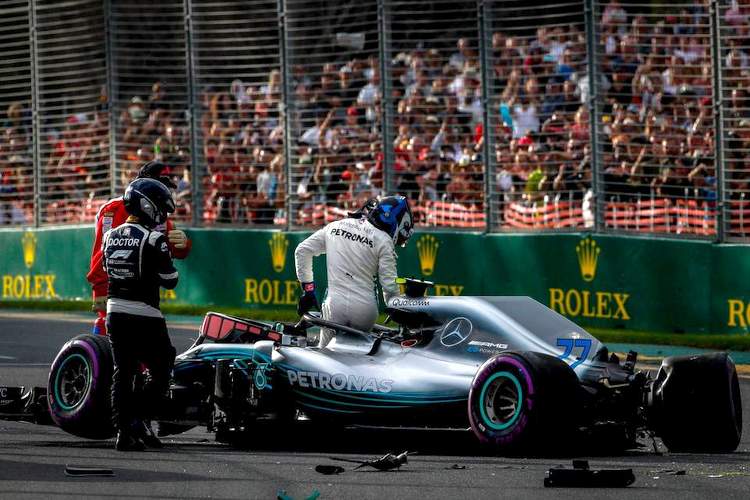 Crashing out of Q3 during qualifying for the Australian Grand Prix is a major blow for Mercedes driver Valtteri Bottas who faces mounting pressure to keep his place with the world champion team, as a number of drivers are coveting one of the two ‘best seats in the house’ at the end of this season.

Bottas had complained in Q1 about the balance of his car, but was still able to keep in touch with his pace-setting teammate Lewis Hamilton during Q2, but during his first run in Q3 his number 77 Mercedes tagged the grass on the inside of the second apex in the Turn 1 complex.

This unsettled the Mercedes and resulted in the back-end of the car stepping out, at which point the Finn was out of control, a passenger as the W09 slammed the wall hard on the exit of Turn 2 to bring his qualy to a premature and disappointing end.

Bottas explained after a visit to the medical centre for a mandatory check-up, “I started the first timed lap and used a bit more track in the exit of Turn 1, went a bit too wide and was surprised it was still a bit damp from the rain.”

“I was just pushing a bit too hard. I went wide in Turn 1 and the kerb was still a bit damp. I lost the rear of the car and hit the wall outside of Turn 2.

“It’s very unfortunate and I feel sorry for the team because we have a really competitive car. It looked like it was damaged pretty badly, so I really hope we can fix it for the race.”

“We have a good car, so I’ll try to fight back the best I can. Once we get the car in the window, it seems like it’s really quick, so that’s something positive from today.”

“We approach the race with fighting spirit. It’s still no points from Saturday, points are given on Sunday, so go for the race and try to come up as high as we can. We’re going to give it all as a team and me as well,” insisted Bottas.

Mercedes F1 chairman Niki Lauda summed up, “Valtteri has to think about it because he could have been right there. I will motivate him and bring him up again. He did everything right but unfortunately one thing not. We are going to bring him back.”

Mercedes boss Toto Wolff added, “It’s a garage of contrasting emotions today with a really unfortunate end to qualifying for Valtteri. It was a big hit and the boys will have a long job list to get the car ready to race. It’s now about putting the incident behind him and recovering as strongly as possible.”

The mistake was a costly one and not the way Bottas would have wanted to start his second year with the Silver Arrows. This is a career-defining season for him as the likes of Daniel Ricciardo, Esteban Ocon and Pascal Wehrlein all knocking at the door should Mercedes decide that the Finn is not up to the task and ditch him.

Depending on the damage to his car he could also face a five-place grid penalty for a gearbox change, while his crew will have a busy evening repairing his car in time for the race.