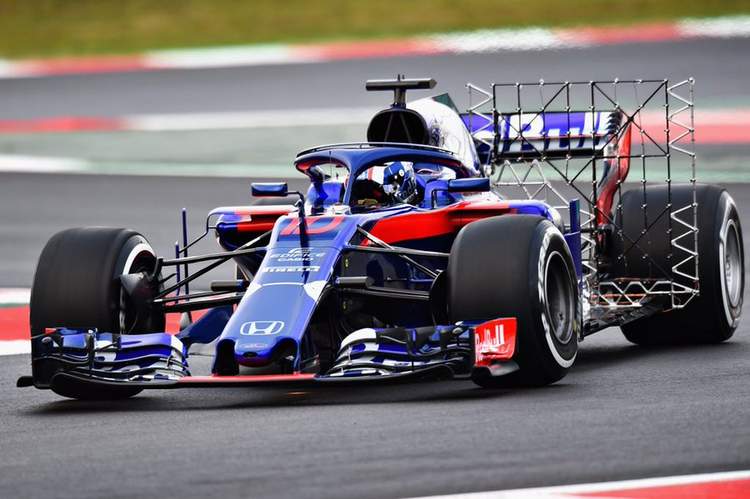 Toro Rosso-Honda report from the second day of preseason testing at Circuit de Catalunya near Barcelona, ahead of the 2018 Formula 1 World Championship.

Pierre Gasly: “Conditions were really tricky today so we didn’t run as much as we could have done. This afternoon was the first time I drove a Formula 1 car in “snow conditions”, so it was quite epic! In terms of work, we got some good laps and more understanding about the car and the engine. We had some interesting tests, so overall I’m happy about today. The first feeling is positive, I felt comfortable with the car – It’s consistent from one corner to another, between the low speed, medium speed and high speed. I still have a lot of work to do and I think we have some good directions overall. We didn’t do any qualifying runs or pushing laps, as our aim was more completing many laps and this is what we achieved, even if we changed the run plan because of the weather. This morning we started really late but I think overall we maximised the time we had on track and we did the best we could do with the conditions.”

James Key (Technical Director): “Today was Pierre’s first day in the car. Like yesterday the conditions have been very cold and sadly as the day went on we lost some running time again with a low temperature and a low-grip track surface. It’s the same for everyone in the end, but still frustrating. Pierre did a really good job in the time he did get on track, he took it steady to begin with, just to get a feel for the car, the track conditions and the tyre warm up, which we know in these temperatures is not so easy to judge. Then he worked his way into it, gaining some confidence and an understanding of how the car was feeling and how the tyres were responding. He then built on that through the rest of the morning and into the afternoon. Considering how little running we had in the afternoon, he covered a good number of laps. We had a minor delay during the afternoon due to a small chassis related issue – nothing special but it just took a little while to address, the power unit has once again run very smoothly all day. We managed to get through some of the most important items on our test list and we certainly learnt more about the way the car is behaving. That’s given us some strong leads on future directions in which to take the setup and possible investigations to look at for the remainder of this test and next week. Having said all that the priority still remains accumulation of mileage and we are not looking too closely at performance levels right now, we will work towards the finer details next week.”

Toyoharu Tanabe (Honda F1 Technical Director): “Following light overnight snow, temperatures were very low for the second day of testing, making the track conditions tricky. All the same, we were able to complete a decent number of laps as we continued working through our test programme. While the team carried out set-up work and also gathered basic aero data, on the engine side, we continued with function tests that we had started yesterday. Pierre did a great job on his first day of testing, keeping out of trouble on the slippery track. Clearly, the cold weather is not ideal, but 82 laps, without experiencing any issues, is a good way of maintaining the momentum from yesterday and we want to continue like this for the next two days.”