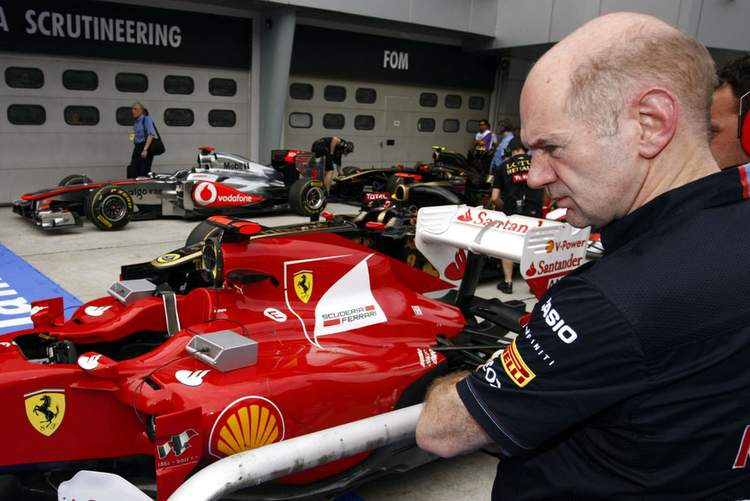 Adrian Newey’s book “How to Build a Car” is an intriguing read for anyone who is a Formula 1 fan and offers answers to questions about the man regarded as the greatest designer of all time while providing a glimpse of life behind-the-scenes of world championship teams.

In his years at Williams, McLaren and Red Bull Racing the industry’s best designer has penned no fewer than twenty Formula 1 World Championship winning cars.

One of the many interesting bits of information is the fact that Ferrari did court the Englishman on three occasions, but Newey has stayed away from Maranello to this day.

Newey revealed in his book, “We were close to an agreement on three occasions. First in that era was when I was still working in IndyCar [in the mid-eighties]. When Ferrari decided to build an IndyCar I was asked to join the project as the chief designer but I thought that did not feel right, so I refused.”

In the nineties Jean Todt was hired by Ferrari president Luca di Montezemolo to lead the Reds and Newey may well have been top of the list for the role of chief designer, “It became more serious when Ferrari team principal Jean Todt offered to join me in 1996 as Technical Director.”

“On my table was the offer to stay with Williams, but I also had offers from McLaren and Ferrari. I’ve been thinking for a long time, but I had a young family at the time, so I wanted to stay in the UK. ”

The position of Ferrari technical chief went to Ross Brawn and together with Todt, Rory Byrne, Paolo Martinelli and Michael Schumacher they conquered Formula 1 for five years in a row.

More recently, in 2014, Ferrari came knocking again and this time it was a close call for Newey, “Renault lagged behind in the turbo engine Ferrari, against Mercedes, the gap was considerable, an end to the misery was not in sight. Renault did not seem willing to provide enough financial resources to solve the problem, which I found depressing and alarming.”

“Red Bull is my home, I’ve built the team with Christian Horner, from the ashes of Jaguar to four world titles. I did not want to give that up so easily. It was difficult. I had some sleepless nights because of Ferrari, but it would have been wrong to leave Red Bull.”

Newey has worked with some great drivers Ayrton Senna, Alain Prost, Mika Hakkinen are some that spring to mind, but he admits there are a few more he would have cherished working with, “It would have been fabulous to work with Michael Schumacher.”

“He was an outstanding driver, but he was always a bit of an enemy. In some actions on the racetrack, he let himself go, which I found regrettable. I guess the competitive instincts dominated there.”

“Then there’s Fernando Alonso. It almost worked out a few times. And Lewis Hamilton. His 2017 season was the best I’ve seen of him, there was not a single weak race. “