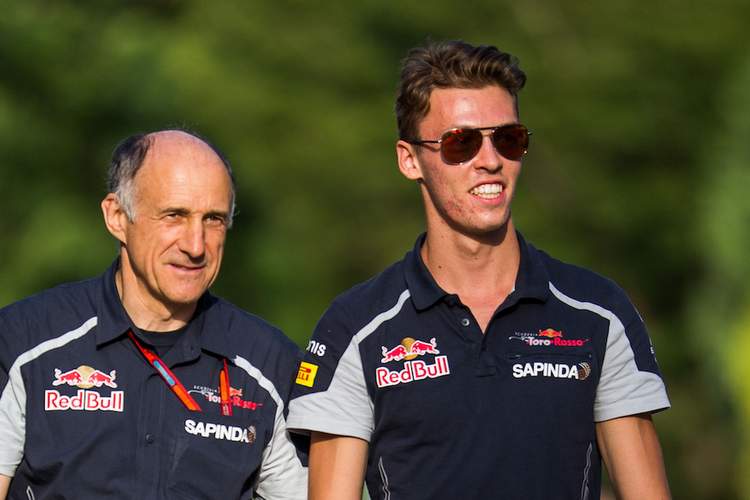 Toro Rosso team chief Franz Tost is convinced that Daniil Kvyat deserves to be in Formula 1 despite being ditched from the Red Bull programme in the latter half of the 2017 season, pointing to the Russian’s pace which he says at times was quicker than Ricciardo.

Tost said of Kvyat, “I remain convinced that Daniil is very talented and at times faster than Daniel Ricciardo but, for some reason, he was not been able to demonstrate this potential.”

Records show that in 2015 when Kvyat partnered Ricciardo at Red Bull, the Russian finished ahead of the Australian in the final championship standings despite three DNFs.

But his fall from grace was swift as he proved to be incident-prone during the first half of the 2016 season. The Russian’s story is well known, in a nutshell, he was demoted from the energy drinks’ main team and returned to Toro Rosso alongside Carlos Sainz.

The truth is he simply did not evolve as a driver, even during the early stages of this season he was out-performed by Sainz and after crashing out of the Singapore Grand Prix he was dropped from the team in favour of Pierre Gasly.

Although he did return it was only for one race in Austin where Gasly could not race due to Super Formula 1 commitments. A week later Kvyat was dismissed from Red Bull.

Tost added, “He had several incidents and reliability failures that reduced his confidence, perhaps with a short break in between, we are going to see again the real performance of Daniil with another team.”

As for the reasons, Tost explained, “Maybe he was too aggressive in the starts because he wanted to get too much at the start of the race, but I hope he gets another chance, he deserves to be in Formula 1.”

Kvyat remains an option for Williams in 2018, the Grove outfit are considering him as well as Sergey Sirotkin, Robert Kubica and Paul di Resta.

Should Kvyat not secure a drive with Williams, there is a chance he could end up being their reserve driver.

2018 is a big year for Toro Rosso as they tackle the season with two drivers with little F1 experience while taking on the hitherto unsuccessful Honda engine.

With regards to this, Tost said, “Everything is going according to plan, there is a very close cooperation between both parties, we communicate regularly by video conference, it’s like a honeymoon.”

“I hope it stays that way for a long time. I am very happy because we are going to be Honda’s only F1 partner, this is an advantage,” revealed the Austrian team boss.

Big Question: Does Daniil deserve to be in Formula 1?