Sauber confirm Leclerc and Ericsson for 2018 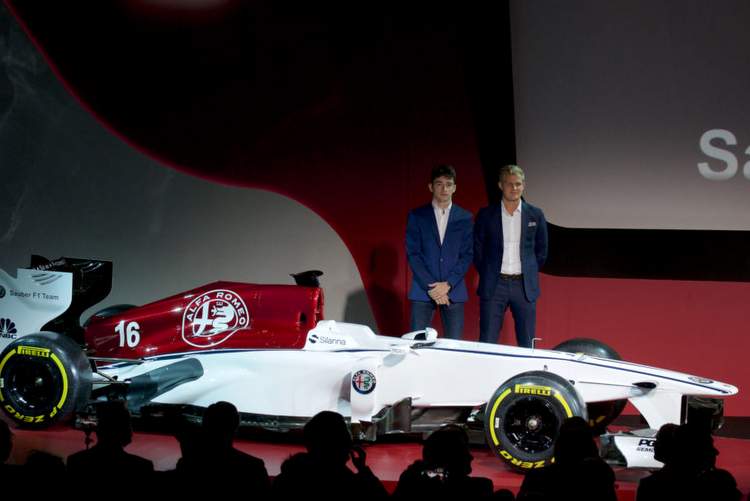 Formula 2 champion Charles Leclerc will move up to Formula 1 with Alfa Romeo-backed Sauber next season while Marcus Ericcson stays in the lineup despite the Swede failing to score a point in 2017.

The announcement was made by Fiat Chrysler (FCA) chief executive Sergio Marchionne on Saturday at a presentation of Alfa Romeo’s new partnership with the Swiss team at the Italian marque’s museum near Milan.

That deal, marking the return of the historic Alfa Romeo name to Formula 1 after a more than 30-year absence, was announced earlier in the week.

Saturday’s event showed off a new red and white livery, with Alfa Romeo branding prominent on the engine cover, and a redesigned logo.

The lineup leaves Pascal Wehrlein, Ericsson’s team mate, facing an uncertain future with former champions Williams the only remaining team with a vacancy but Robert Kubica favourite to fill it.

Ferrari-backed 20 year old Leclerc, from Monaco, had been expected to get the Sauber drive after a dominant season in the official feeder series.

Ericsson’s future had been in doubt, with Ferrari-backed Antonio Giovinazzi also a candidate under the new partnership.

Giovinazzi will be the reserve driver instead, taking part in Friday practice sessions.

Marchionne, who is also chairman of Sauber’s engine suppliers Ferrari, has made the title sponsorship of Sauber part of his reshaping of the FCA-owned Alfa Romeo brand.

Fiat Chrysler have invested billions of euros since 2014 to develop new Alfa Romeo models that would stand up against German premium rivals and shed a reputation for poor quality and service that has hit sales in the past decade.

“Formula 1 is the natural reference point for a marque like this,” he said.

Marchionne added that the partnership would also strengthen his hand in talks with Formula One about the sport’s future and warned that the deal could end in 2021 if Ferrari decided to walk away as they have threatened.

“Now there is the additional benefit that when we sit down at the table to discuss the future of Formula One, we’re playing two marques,” he told reporters. “I think the guns are loaded in a different way.”

In a speech, Marchionne also thanked Sauber Holding chairman Pascal Picci and Swedish billionaire Finn Rausing for their support in reaching a deal that should boost a team that finished last overall this year.

“It’s an amazing opportunity for me but also for the team,” said Ericsson, whose financial support has long been linked to Rausing and the Tetra Laval packaging group.

“I think obviously we’re starting from quite far behind because we had a difficult season, but I think we have the potential to take a good step forward.”

Alfa Romeo have a strong heritage in Formula 1 with the first two world championships in 1950 and 1951 won by Italian Giuseppe ‘Nino’ Farina and Argentine Juan Manuel Fangio in their cars.

Ferrari’s late founder Enzo also started out racing and managing a team for Alfa Romeo, before setting up on his own in the late 1930s.