Austin Qualifying: Hamilton and Vettel on the front row 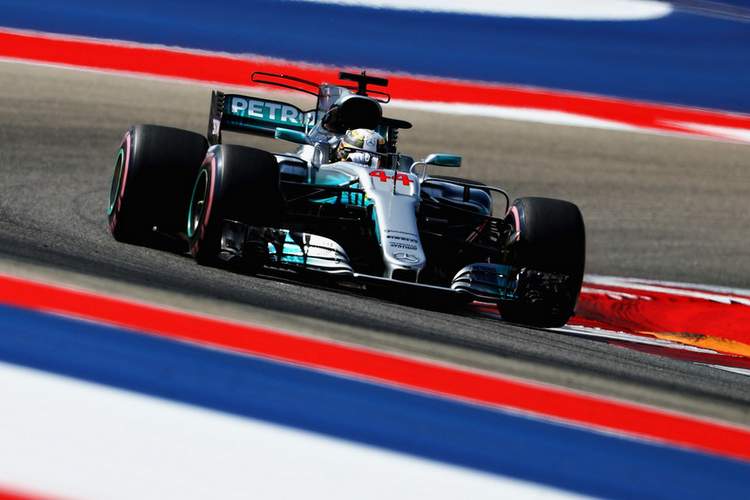 Formula 1 World Championship title contenders Lewis Hamilton and Sebastian Vettel will start the United States Grand Prix from the front row of the grid, with the Mercedes driver on pole and the Ferrari alongside him.

Hamilton has been in scintillating form in qualifying for several races now and he carried it through to the Circuit of the Americas, where he topped the timing screens in all three stanzas of the session.

His lap of 1:33.108 came on his first run in Q3 and was enough to do the business, granting him his 72nd top spot start on Sunday, as he seeks his fourth F1 world title at a track where he has won on four of the five occasions it has been on the calendar.

Hamilton said afterwards, “The team have done a great job, the track was very difficult with the wind picking up. But I love this track it is such a fantastic track to drive, I love it. It is always hot in the car, it is just the right temperature today. It is going to be a great race, a tough one, but I’m the best prepared I can be.”

Asked if he could wrap up the title on Sunday, Hamilton replied, “It is highly unlikely that that will be the case. Sebastian Vettel did a great job to get his car back up there. Sebastian is right there and unless he makes a silly mistake, which is unlikely – he is a four-time world champion – we will see it going on.”

Up until Q3, the weekend had not been smooth for Vettel, he appeared to struggle to find the sweet-spot with his Ferrari. The team changed his chassis as he struggled with the car’s handling during a niggle packed Friday.

But when it mattered in qualifying he dug deep to deliver a great final lap in which he somehow found half a second, ending a couple of tenths shy of Hamilton’s best but, crucially, did enough to split the Mercedes duo and grab that important front row start spot.

Vettel summed up, “I’m very happy in the end but I was lacking a bit of rhythm with the wind. But I got it right when it mattered at the end. It’s important to get the front row because I believe our race pace is really good. In qualy all year we have been just a little bit behind.”

“Congratulations to Lewis he did two good laps but I’m looking forward to tomorrow. We go day by day. We lacked a bit of running yesterday but today was better. The race is tomorrow. It’s a great track so it should be a good day,” added the Ferrari driver.

Valterri Bottas was third quickest, at one point looking likely to start on the front row, but ran out of firepower in Q3.

The Finn could only manage to get within three tenths and half a second of his pace setting teammate throughout the session, and was not happy afterwards, “Definitely disappointed. It was looking good for us and quite close with Lewis at some point. Disappointing but there’s always tomorrow.”

Another one to take his time to get going was Daniel Ricciardo, but when he did he powered the Red Bull to fourth place on the timing screens with a best lap time of 1:33.577, which was identical to the lap time set by Kimi Raikkonen in the Ferrari – Ricciardo credited with fourth place because he crossed the line before Raikkonen.

Max Verstappen, in the other Red Bull, was sixth fastest but faces a 15-place grid drop for the use of a sixth engine and MGU-H this season.

The Dutchman told reporters, “I made some mistakes in Q3 as simple as that. I should have been with Sebastian. I’m not happy with myself and this was one of the worst qualifying of the year for me. I’ll try to at least come back to sixth tomorrow.”

Best of the rest, behind the big three teams, was Force India’s Esteban Ocon with the seventh best time, half a second up on his teammate Sergio Perez who ended the session tenth fastest.

If there were a qualifying ‘man-of-the-match’ it would have to go to Carlos Sainz, who has not put a foot wrong since he donned the yellow overalls, setting the eighth best lap time and out-qualifying his highly rated teammate Nico Hulkenberg.

Sainz said during his media interview, “I’ve enjoyed it a lot. It hasn’t been easy. I didn’t know how the car was going to react to changes. I’ve been following very closely the progress of Renault this year. I was really looking forward to joining this team because they have developed a lot through the year. I was coming here with not too many intentions, just focusing on being as fast as I can in this car.”

Fernando Alonso was ninth for McLaren, getting into Q3 with a superb effort which was six tenths of a second faster than his teammate Stoffel Vandoorne.

The Spaniard said, “The Q2 lap was probably my favourite one. Said to the team this was probably the maximum I could do. “P9, starting P8 after Verstappen’s penalty, it is a great chance to score points. We missed out in Singapore with the first corner incident, we were close in Japan with Felipe on the last lap even though we started last with engine penalties. Tomorrow if everything goes well then hopefully finally some points.”

Beyond the top ten Felipe Massa looked good for a Q3 berth but was denied, ending the session in 11th while his Williams teammate Lance Stroll struggled with a power issue which saw him progress no further than Q1.

Toro Rosso driver Daniil Kvyat was 12th fastest in his return, after a two race absence. His best time was eight tenths faster than his teammate, debutant Brendon Hartley, who failed to make it into Q2 after setting the 18th fastest time in his first F1 qualifying session.

The traffic upset the opening run of Verstappen who abandoned his lap saying “it’s a big mess out there”. His engineer’s response was to tell the Red Bull driver that he had to make the next one count. And Verstappen obliged jumping to P1. He was quickly demoted to P2 by Hamilton with a lap of 1:34.899 that he then improved by seven hundredths to hold top spot.

Behind Verstappen, Bottas was third ahead of Vettel, Renault’s Sainz, Williams’ Massa and the second Ferrari of Räikkönen. The Mercedes and Ferrari drivers all set the best Q1 times on the supersoft tyres.

After the final runs a cluster of drivers battling to escape the drop zone fought their way into the 1:36.8s bracket. It was Haas’ Grosjean who edged through to Q2 with a lap of 1:36.835. Seven thousands of a second behind and eliminated in P16 was Sauber’s Ericsson.

It was a painful exit too for newcomer Hartley, with the New Zealander in 18th place, behind Stroll, but just five hundredths of a second behind Grosjean. Also out were Sauber’s Wehrlein in P19 and Haas’ Magnussen in P20.

Hamilton was again the pace in the second session, setting a first run benchmark of 1:33.560 and eventually shaving just over a tenth off that to finish ahead of team-mate Bottas with Räikkönen third ahead of Vettel and Red Bull’s Ricciardo. Verstappen, though, made the choice to set his Q2 time on supersoft tyres ahead of his 15-place grid penalty for the race.

Hamilton maintained his grip on proceedings in the opening runs of Q3, laying a provisional claim on pole position with a time of 1:33.108. That left him 0.460 clear of second-placed team-mate Bottas, with Räikkönen third on 1:33.852. Vettel was in fourth, 0.759s behind his title rivals.

And in the final runs there was no touching the championship leader’s opening lap, though Vettel pushed the Briton hard. The Ferrari driver found over half a second on his final run to seal a front row berth, but he still ended the session 0.239s down on Hamilton’s opener.

There was a similar leap in the final runs from Ricciardo. The Red Bull driver opened his Q3 account with a time of 1:34.130 to sit sixth, but in the final runs the Australian dug deep and found 0.553s to jump to the second row of the grid and fourth spot behind Bottas.

There was no such improvement for Verstappen, however. The Dutchman made a small mistake in the penultimate corner and though he made a two tenths of a second improvement over his opening time, he had to settle for sixth place behind Räikkönen.

Ocon took seventh ahead of Sainz, with McLaren’s Alonso ninth and Pérez 10th in the other Force India. 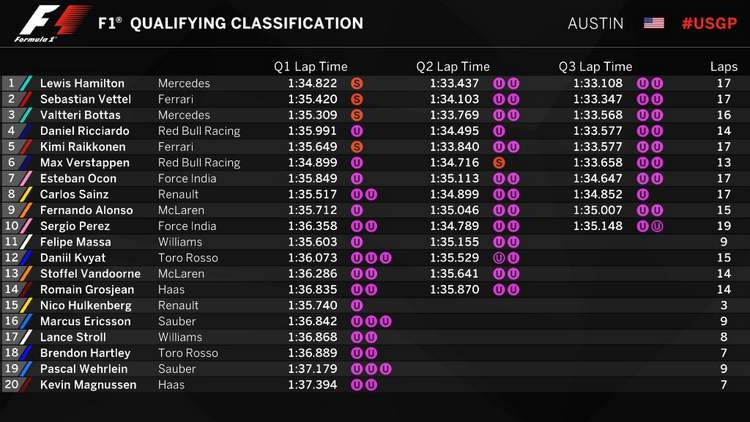