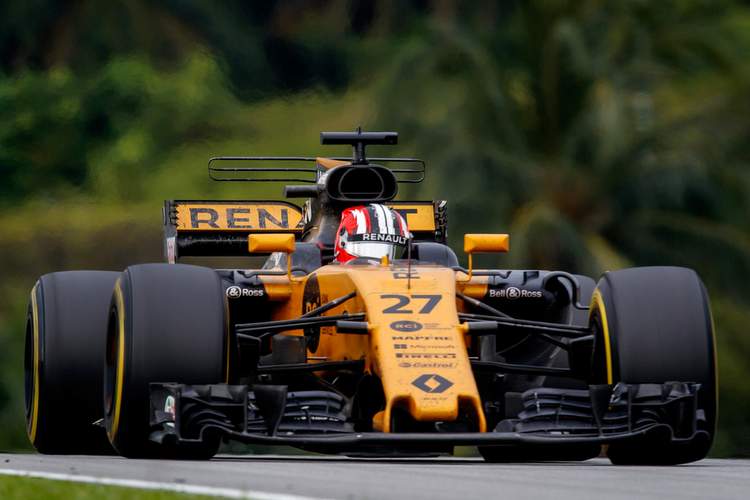 Renault team and drivers preview the Japanese Grand Prix, Round 16 of the 2017 Formula 1 World Championship, at Suzuka.

Foreword from Renault Sport Racing Managing Director, Cyril Abiteboul: “Suzuka is one of the most iconic and unique circuits in Formula 1, and we love racing there. Japan is the final race of the East Asian triple-header before the last stretch.”

“On a brief reflection of Malaysia, it is safe to say we leave there feeling disappointed. It was a very tough weekend and we couldn’t quite make the car work as we have in previous races.”

“The first lap put us on the back foot and both cars failed to work their way up into the points. We tried an aggressive strategy with Nico, but that gamble didn’t pay off. Jolyon had a couple of spins late on and lost some positions.”

“It’s one of those weekends we are keen to brush aside. We are fortunate that the Japanese Grand Prix comes soon after so we can make a swift return to where we are.”

“On a brighter note, it was great to see our partner team Red Bull Racing taking victory with the Renault power unit.”

“Suzuka is a favourite for the drivers due to the unique challenge it offers and its fast bends. It’s a well-balanced track, not too power sensitive, so we think we can be competitive there. Back-to-back races are always challenging, but it means we head to Japan determined to return to the points.”

“We will have some aero upgrades in Suzuka which we hope will bring performance and so points. They are essential if we are to reach our end of season objective of fifth in the Constructors’ Championship.”

Suzuka throws up a special challenge for both car and driver as Technical Director Bob Bell explains.

What’s the outlook heading to Suzuka?
BB: It’s a challenging track and a Grand Prix which always produces exciting racing. The circuit is a mix of low and high-speed corners and frequent changes of direction such as the S bends. It should suit the R.S.17; speed-wise it’s a bit like Spa and Silverstone where we went well. We head to Japan feeling hungry and positive. We want to get over the disappointment of Sepang as rapidly as possible.

Any caveats to the positive outlook?
BB: Japan is a venue where you never quite know what you’re likely to get with the weather. We have seen numerous wet races in Suzuka across the years and even some more extreme weather too. However, if we look at our recent wet weather performance, we can see that we struggled a bit in Monza on the Intermediates, but we weren’t bad in the Wets in Singapore. We’re making progress and learning how to handle different conditions.
In summation, we don’t go to Japan with many major concerns. We need to keep working on our reliability as we have the pace in the car to meet our objectives, it’s more a case of getting the car across the line with both drivers.

What went wrong in Sepang?
BB: It came as a wake-up call. We realised on Friday the car wasn’t on the pace as both drivers weren’t happy with the balance. We were encouraged that we made some changes before qualifying and it was there or thereabouts. But lots of things went wrong in the race, most notably at the start and thereon it was difficult to close the gap back. It’s complex to analyse but, with decent starts and in maximising opportunities points would always have been possible. We will use lessons learnt to do better in Suzuka.

A bitterly frustrating outing in Sepang means Nico Hülkenberg is determined to return to the top ten around the legendary Suzuka circuit.

What are your thoughts on the Japanese Grand Prix?
NH: Japan is very special. The fans are amazing; they are among the most enthusiastic out of all the places we visit. They are super supportive; day, night, whatever the weather. It’s certainly one of the race weekends I look forward to. I have a fairly decent and consistent record around Suzuka, so I’m looking forward to getting out there and hopefully continuing the run.

Is Suzuka one of your favourite circuits?
NH: I love coming to Japan as Suzuka is one of the best tracks to drive on the calendar. It has a good flow, it’s very quick but a nice feeling. You can be quite aggressive in places. It’s quite up and down, which you don’t really see on TV. 130R is flat out, a big corner and a lot of fun. This year’s cars will be a cool sight to see there! It’s a great pleasure to nail these corners.

What are your feelings after Malaysia?
NH: It was a difficult weekend for us and we struggled throughout the three days. We didn’t really find the balance or grip. Qualifying was good and we squeezed some performance out. The first lap of the race wasn’t great and put us on the backfoot and we couldn’t recover. It was a frustrating weekend, but we’ll analyse and regroup and push again in Japan.

Jolyon Palmer is keen to take a second points finish of the season in Japan as the Formula 1 season heads into the final straight.

How is Suzuka to drive?
JP: It’s an old-school circuit, highly unique especially the first sector which is fast and flowing with quick changes of direction. The middle sector is cool with the two Degners, which are quick and crucial to get right. 130R is mega and the chicane features a good overtaking spot. It’s three challenging, but enjoyable, sectors and I went fairly well there last year, so looking forward to it.

What’s the atmosphere in Japan like?
JP: The fans embrace Formula 1 like no other country and Suzuka is always packed out when F1 is in town. The fans are so passionate which makes it a special weekend. There’s crazy merchandise and crazy hats there and everyone really shows their support. That’s what we love to see! The history of Formula 1 and Japan is well-known. As for other aspects, I’m quite partial to sushi and teriyaki so I’ll be eating well when I’m there.

How do you reflect on Malaysia?
JP: Malaysia was a frustrating weekend, but in Japan we should be stronger. We can take some positives from Sepang. Back-to-back races are good, especially after a disappointing weekend, as it means we can put it behind and aim to do a better job in Japan.