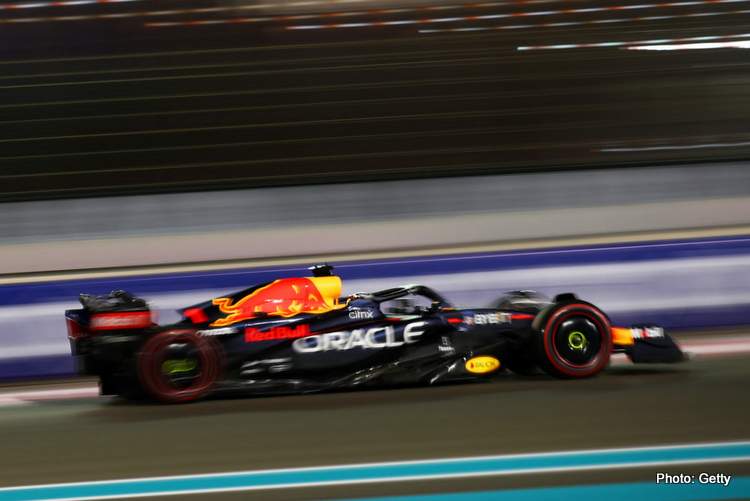 It was the Dutchman’s seventh pole position in 2022, his 20th overall, as Red Bull proved to be hard to beat under the flood lights of Yas Marina Circuit as Sergio Perez took second place behind his teammate.

That was proper team work from Red Bull, as Verstappen gave Perez a tow on the Mexican’s second flying lap in Q3 helping him to line up second.

Charles Leclerc was the third fastest driver on Saturday night in Abu Dhabi, a decent result given the struggles the Reds faced in FP3, but they bounced back as Carlos Sainz took fourth fastest behind his teammate, making for a Red second row for Sunday’s starting grid.

Verstappen: A bit of an up and down qualifying 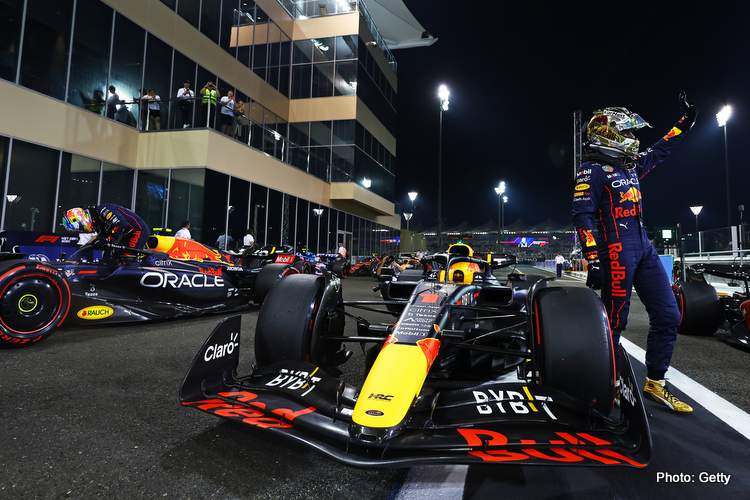 Polesitter Verstappen reflected on his qualifying, he said: “It was a bit of an up and down qualifying. It started off quite well. Q2 was a little bit messy. I don’t know why but on those tyres I couldn’t get the grip together.

“But then in Q3 it all felt a bit more normal. We had a bit of a scare, the car turned off before the first run, so we had to reboot everything. Then we went out and both of the laps were good enough,” he revealed.

“I’m very happy that both cars are on the front row, because of course we want to win the race, but we also want to finish second with Checo in the championship, so that’s definitely a great start before tomorrow.

“For sure today was amazing, I still expect it to be a a good battle tomorrow, but at least we have both cars there and we can do what we want,” he concluded.

Second-placed Sergio Perez added: “It’s a good starting place. I didn’t make that final step in Q3, especially the first run wasn’t that good, so we were a bit behind. It’s good to lock out that front row for tomorrow.

“Max did a great job also for me, we worked together as a team really strongly on that final run,” he added acknowledging his teammate’s tow. “I’m looking forward to tomorrow, which is the day that really matters.

“I think it’s going to be a very interesting one, given how strong Ferrari will be, and Mercedes,” the Mexican concluded.

Charles Leclerc admitted to a couple of mistakes on his hot lap, but admitted Ferrari simply did have the firepower to fight the Bulls.

“I locked up in Turn 6 and 7, but it’s the place we deserved today,” he said. “The Red Bulls were stronger, but we are still in quite a good position for tomorrow, it’s going to be close with Checo, for sure.

“I’m sure we can work together too with Carlos, I have no doubt on that. We’ll try to maximise the team result,” he added.

“We know Red Bull are a bit stronger on Sundays so we know it’s going to be tricky, but we are going to give it all and hopefully we can get that second place in the drivers’ and constructors’ championships,” the Monegasque concluded.

Max Verstappen clocked a 1:23.824 to take pole in Abu Dhabi, 0.228s faster than teammate Sergio Perez who will line up next to him on the front row for Sunday’s race.

P1 ➕P2 on Saturday 💪 It’s been a while 😍 #AbuDhabiGP 🇦🇪 pic.twitter.com/6ALCd0whcI

Charles Leclerc was third fastest, 0.268s off pole but only 0.040s away from Perez, as the scene is set for a tight battle between the two in the race as they each look to claim runner up in the Drivers’ Championship.

Mercedes had to settle for fifth with Lewis Hamilton, 0.684s off the pace while George Russell was sixth in the sister Silver Arrow, 0.003s only behind his teammate.

Lando Norris was a decent seventh for McLaren, but 0.945s down from pole, with Esteban Ocon hot on his heels in the Alpine, 0.061s behind in eighth.

Seb takes P9 in qualifying for the #AbuDhabiGP, signing off his last #F1 Saturday in style. #DankeSeb pic.twitter.com/6ztQjXqYrs

Sebastian Vettel will bid farewell to F1 with a very respectable performance, putting his Aston Martin where it doesn’t belong, ninth on the grid, 1.137s away from Verstappen’s pole time, having done only one run in Q3.

Daniel Ricciardo also did well to qualify in the top ten on his final qualifying with McLaren with a 1:25.045, but almost three tenths slower than his teammate. 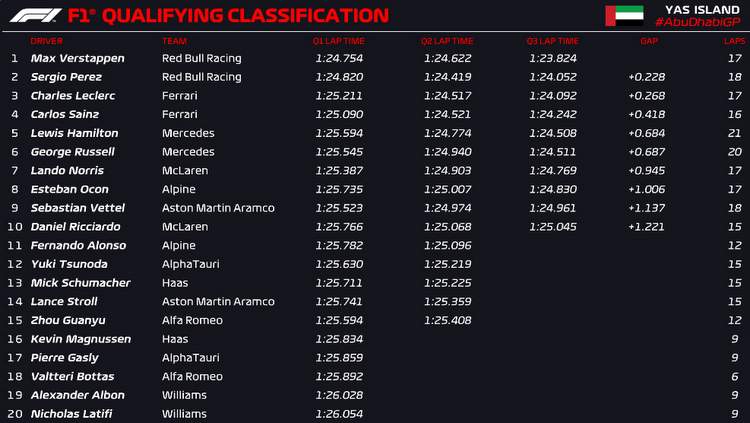 Mercedes drivers Lewis Hamilton and George Russell were the first to head out on track in Q2 on a set of used Soft tyres setting the two first lap times, Russell faster than Hamilton.

Hamilton notably, is not happy with the brakes on his W13, reporting over the team radio: “The brake is still a problem.”

Max Verstappen also wasn’t happy with his car, he radioed the team: “I don’t know what happened, I had zero rear grip, so weird.”

The Dutchman’s first effort in Q2 was 0.443s slower than teammate Sergio Perez who lapped fastest out of the box.

Perez took over from Verstappen and lead the top ten qualifiers into Q3, with a 1:24.419, 0.098s faster than Charles Leclerc who second fastest.

Carlos Sainz was third fastest in the sister Ferrari, 0.102s off Perez, while Max Verstappen was fourth, 0.203s off his teammate.

First to miss out on Q3 was Fernando Alonso in the Alpine, missing the cut by a painful 0.028s, and was followed by Yuki Tsunoda in 12th, and 0.123s behind the Spaniard. 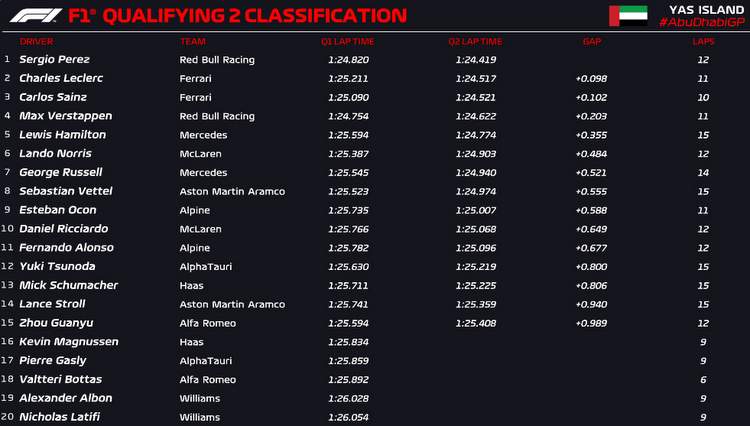 Qualifying started with the news that Lewis Hamilton, who was under investigation for breaching the Red Flag in FP3, was cleared by the Stewards with no risk on his eventual qualifying result.

The sun had already set by the time Q1 was green lighted as the cars head out on the cooled-down track under the flood lights that illuminated the Yas Marina Circuit.

Max Verstappen led the qualifying pack from Q1 into Q2, with a 1:24.754, followed by teammate Sergio Perez in second place, only 0.066s behind him.

Third place went to Carlos Sainz in the Ferrari, 0.336s off Verstappen’s pace, while Charles Leclerc was fourth fastest, 0.121s behind his teammate.

Worth noting is an impressive lap delivered by Aston Martin’s Sebastian Vettel to go in Q2 sixth fastest. He recorded a 1:25.523, 0.769s slower than Verstappen’s time.

He’s through to Q2 despite having to navigate traffic 😲#AbuDhabiGP #F1 pic.twitter.com/1S8hX3nP5b

The first driver to be disappointed at the end of Q1 was Haas’ Kevin Magnussen who was 16th fastest missing his Q2 chance by 0.052s.

Behind Magnussen in 17th was Pierre Gasly, 0.025s behind the Dane as Valtteri Bottas was 18th fastest and 0.033s behind the Frenchman.

The Williams pair, Alex Albon and Nicholas Latifi will line up 19th and 20th respectively for Sunday’s race, only 0.026s separating the teammates. 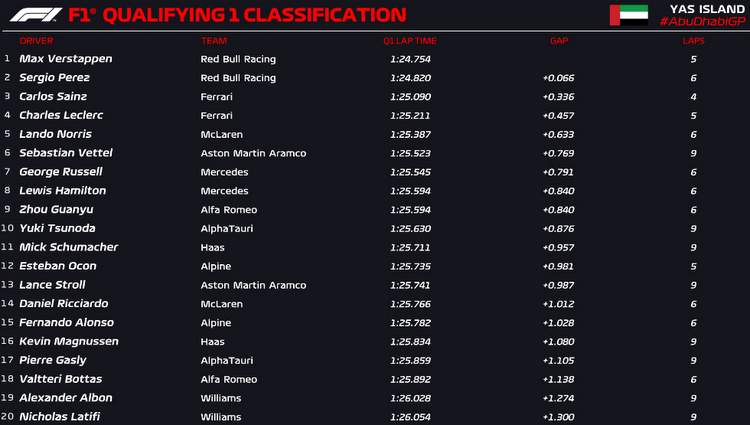