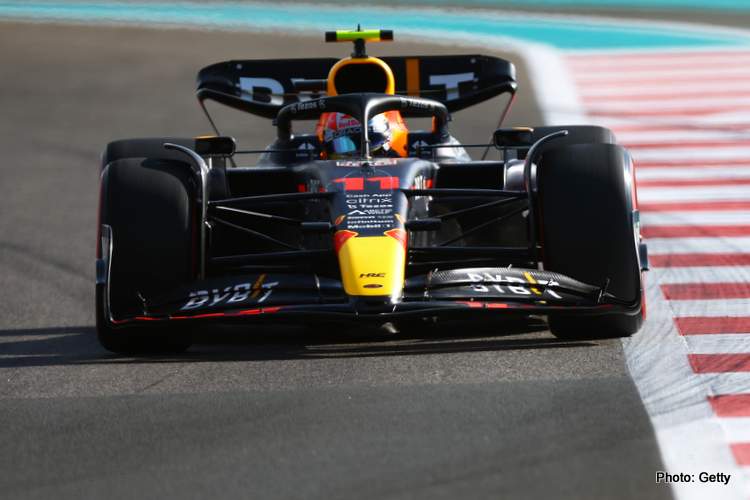 This should a be proper boost for the Mexican entering into qualifying later on Saturday in Abu Dhabi, as he looks to secure the runner up position in this season’s Formula 1 Drivers’ Championship.

Max Verstappen who took his time to head to the track was second fastest behind his teammate, over one tenth slower after a messy lap on Soft tyres.

Lewis Hamilton – under investigation for speeding under the Red Flag – took the third spot in the Mercedes, as Ferrari seemed to be struggling, Charles Leclerc and Carlos Sainz finishing FP3 sixth and seventh respectively.

It’s worth noting that conditions in qualifying will be much cooler than FP3, which will make it interesting to see which teams will have properly anticipated the temperature changes in their setup.

It’s the second day of the 2022 Abu Dhabi Grand Prix weekend, the finale for this Formula 1 season, and honestly we are missing the buzz of it’s 2021 version.

Red Bull and Max Verstappen seem to be back on form after their wobble in Brazil, the Red Bull ace comfortably fastest in FP2 on Friday and expressing his happiness with his RB18 after that.

Despite starting strongly, Mercedes took a back seat in Friday’s second practice, while Ferrari seem to be suffering with tyre degradation on the long runs.

Other than that, F1 announced a new all-female racing category over the course of the weekend, in the form of the F1 Academy, in what could be another route for female racers to reach the pinnacle of motor sport aside from the troubled W Series.

Other than that Daniel Ricciardo is set to go back to Red Bull, albeit in a reserve role as we await to see the fate of Mick Schumacher… A Mercedes reserve role?

One final Saturday with Seb 💚

The teams and drivers will keep in mind that conditions for qualifying that will be held almost 30 minutes after sunset in Abu Dhabi, which mean the track will be much cooler than the 45 degrees Celsius registered in FP3.

Mercedes sent both drivers out on Soft tyres immediately the pair going straight to the top of the time sheets, Lewis Hamilton faster than George Russell.

The ambient temperatures were quite high, as 20 minutes into the session, McLaren’s Lando Norris suffered from overheating brakes.

With most drivers already making track appearances, Max Verstappen remained in the team garage, seemingly not in a rush to get going.

A little before the halfway mark, Alpine’s Esteban Ocon brought out a brief Yellow Flag, stopping at Turn 14, but then gets going, no drama.

Pierre Gasly brought out the Red Flag halfway in the session, hitting the kerb hard and losing some of his AlphaTauri’s body work that remained on track and required removing.

The Frenchman limped back to the pit with a punctured front right. Did the flying piece cause the puncture or was it the other way around? It’s not clear.

The front right tyre winglet flies off his car with his tyre deflating#AbuDhabiGP #F1 pic.twitter.com/t8f346P3HQ

Race control announced that Lewis Hamilton will be under investigation for failing to slow down under the Red Flag, as footage showed the Briton overtook two cars.

The investigation, which Lando Norris pointed out, will take place after the session.

Less than ten minutes from the end of the session, Charles Leclerc reported over the radio: “Loads of oscillations from the engine on throttle.”

“It’s not looking good, softs are gone after four corners,” Leclerc adds later as he comes in to the pits. Not what the Ferrari pitwall would like to hear from the Monegasque.

Sergio Perez’s best effort around the Yas Marina Circuit was a 1:24.982, 0.152s faster that teammate Max Verstappen who was second fastest.

Lewis Hamilton was third fastest in the Mercedes, 0.240s off the pace, with George Russell 0.173s further down the road in fourth.

Interesting to see whether Mercedes can maintain their pace in the cooler qualifying conditions.

Lando Norris was fifth fastest in the McLaren, with a 1:25.518, over half a second away from the best time and he was followed by the Ferrari pair.

Charles Leclerc was sixth fastest, 0.589s slower than Perez’ benchmark, while Carlos Sainz was seventh, 0.034s behind his teammate.

Daniel Ricciardo was ninth fastest in the #3 McLaren, almost a second slower that the top time, with Sebastian Vettel ninth in the Aston Martin, 0.062s behind the Australian.

Alex Albon rounded off the top ten for Williams, 1.069s too slow. 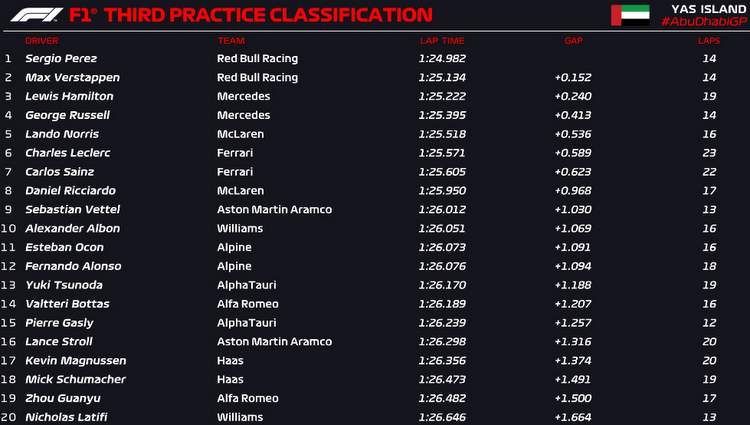