Norris: Leclerc was the one in the risky position not me 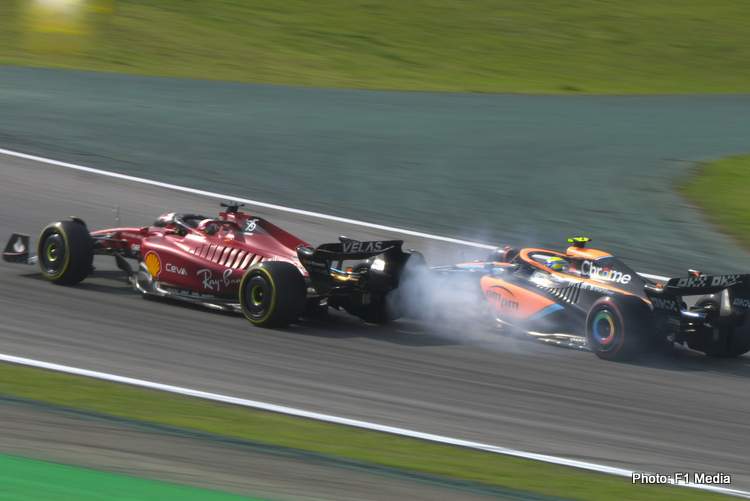 Lando Norris insisted his incident with Charles Leclerc in the 2022 Sao Paulo Grand Prix was down to the Ferrari driver putting himself in a risky position.

Lando Norris and Charles Leclerc got tangled after the first Safety Car restart of the race, the latter attempting an overtake taking the outside line.

Leclerc was dispatched into the barriers, his F1-75 miraculously surviving the hit, and was back in the race, while Norris was slapped with a five-second time penalty.

Facing the media after the race, Norris was asked if he thought his incident with Leclerc should’ve been judged as a racing incident, and whether the Stewards are being too stern in their handling of racing incidents.

“I think sometimes, I think it’s so difficult for them to put themselves in my shoes say in this instance,” Norris said. “Charles took a risk of going around the outside.

“The first thing you learn in racing is normally not to go around the outside and if you do you need to leave a lot of space,” the Briton went on. “We were in the quickest corner on the track, so he was the one in the risky position not me.

“Do they just look at the incident from an outboard camera and say he’s caused the crash or do they actually understand, have they done everything to avoid a crash and so on,” the McLaren driver quesntioned. “So there should be more drivers, there needs to be more drivers who can understand what it’s like to be in my position or Charles’ position.”

Stewards should not only rely on data

Norris called on the Stewards to try an understand the conditions of the drivers while they are racing, and not only rely on data and footage.

He said: “It’s impossible to have a binary thing in racing because nothing is ever the same. There’s too many times I feel, nothing against the stewards we have, but there’s too many times when I don’t think they understand the position it is to be in in the car, driving the car at the speeds we do around some of the corners that we have to drive around.”

On the other hand, Leclerc said he didn’t believe Norris was malicious with his move, but maybe a tad aggressive; he said: “I know Lando is not this type of guy but for some reason today he was very aggressive and also yesterday the same with Carlos.

“I don’t really understand but it’s like this. At the end I don’t expect him to let me pass, he didn’t but today was too much and he paid the price with the penalty I guess,” the Monegasque concluded.

Norris ended up retiring from the race due to a problem with his MCL36 on lap 53 of the race, as McLaren leave Brazil empty handed after Daniel Ricciardo’s race ending clash with Kevin Magnussen on lap 1. (Additional reporting by Agnes Carlier)